It was Pancake Tuesday. Shrove Tuesday or Fat Tuesday aka Mardi Gras. The last day before the beginning of Lent.

In recognition of the day, we drove into town about 9:00 AM and went to Wimpy's Diner. This retro diner, named in honour of hamburger gourmand J. Wellington Wimpy of Popeye fame, was packed on this Tuesday morning. I asked if that was usual for a Tuesday or because of all the pancake offerings on the specials board. Our server said it was that way pretty much every morning. 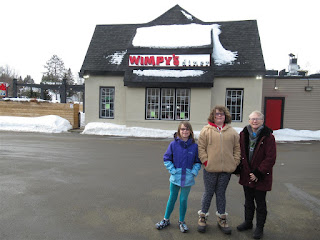 While the ladies had pancakes and French toast, I avoided the carbs with a meat lover's omelette and sliced tomatoes. It was all very good. Wimpy's is a chain that appears to have grown all across southern Ontario just like Chuck's  Roadhouse. While neither have any presence in Northern Ontario, I am pretty sure that either one would be very successful in the Sudbury market. 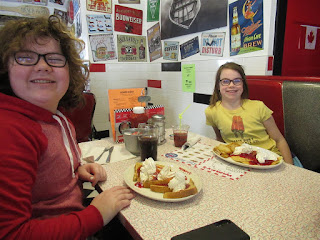 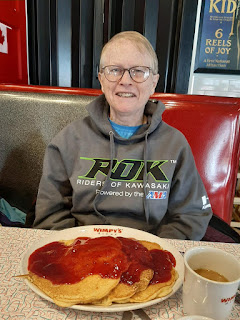 Pancakes were light and fluffy 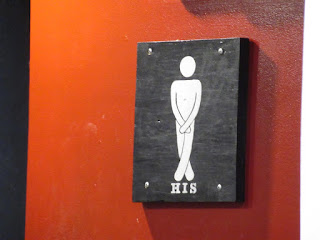 A men's room sign with a sense of humour

Back at the Lodge, we dropped Sandy at the room and then headed over to the skating rink on the lake. As predicted, the overnight chill had refrozen the ice. Unfortunately, it had not been flooded and every gouge and irregularity was frozen solid. There was a small stretch down one side where Jolene and Robyn were able to skate but, if they went too far, a layer of water and bubbles were visible under the top ice surface as it cracked. After a little while, we gave up and headed back to the suite. 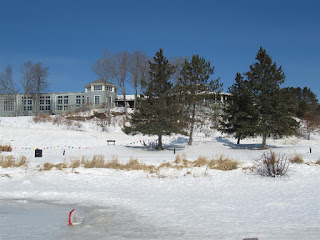 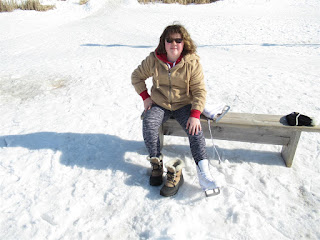 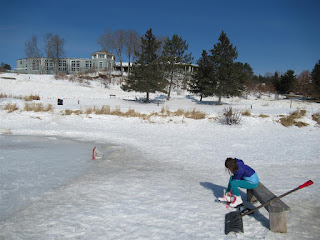 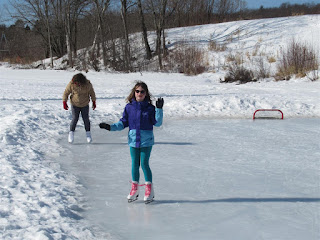 About 12:30, we walked down the hill to the building with the Yamaha sign. We met our guide, Bob, and selected riding gear from a wide selection of jackets, pants, boots, gloves and helmets. We were joined by Glen from Scarborough, who sold his last sled ten years ago when he left Peterborough for the city. 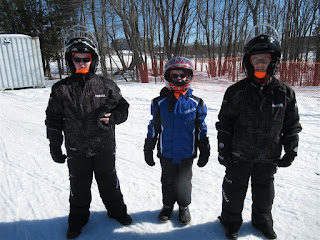 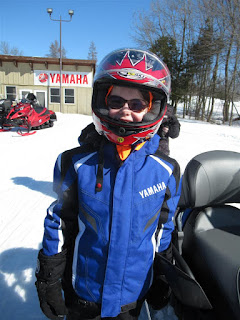 The operation here belonged to Yamaha and was designed to give non-sledders a taste of what the sport is all about. They hoped that, if the beginners liked it, they will consider buying a (you guessed it) Yamaha. Because the experience was aimed at first-timers, it would be quite dull for more seasoned rider. That said, our objective was to give the grandchildren a snowmobile experience and not be too rough on Sandy.

We met the machines. They used 2020 Yamaha RS Venture touring sleds. These featured 1,049 CC four stroke engines and the Yamaha Chip Controlled Throttle (YCCT). Of the Entry, Touring and Sport modes, these were set to Entry (a wise choice for beginners). The suspension was luxurious and they even had electric power steering. The kids did not grasp that these were not their grandfather's snowmobiles. If they break down, do you call CAA? The price of these 2020 machines started at $15,399. Yikes!!! 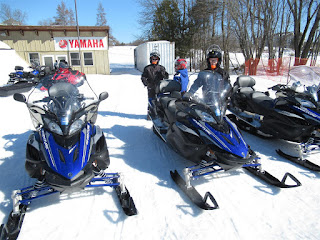 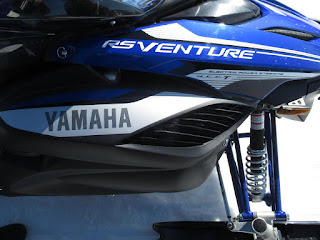 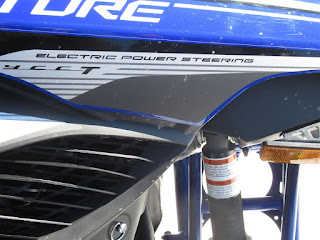 Bob gave us a brief course in the field with emphasis on leaning to keep the 700+ pound machines upright in turns and on uneven ground. He went so far as to tell me I wasn't leaning enough. After it was over, I told him I leaned as needed and he said he was teaching at the beginner level where everything was emphasized. We both laughed about it.

With Jolene on behind me and Robyn on Sandy's second seat, we road some of the Muskoka Snowmobile Region trails. The snow was soft and the groomer had ripped up some base but, in my expert opinion, they were doing the best they could given the conditions. I was surprised to find that Yamaha was still mounting the heat exchangers under the floorboards, a less than ideal setup in hard packed conditions. To keep the engines and our feet cool, Bob packed the boards with snow. My old '95 Ski-Doo Formula Z with the exchanger in the tunnel and 96 1" carbide tipped studs in the track never overheated. 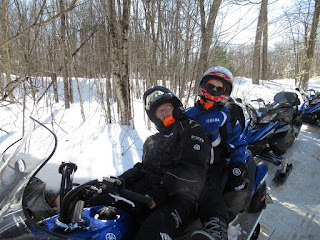 At the turnaround point 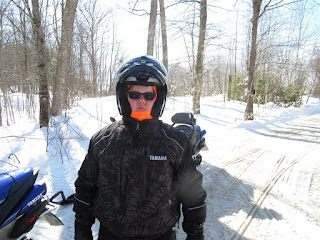 Jolene ready to start back

On the return trip, I kept dropping back so I could go a little faster through the turns. Despite the poor trail conditions, I could see the potential for fun on a colder day. On Fairy Lake, we got a lesson in the limitations of the YCCT Entry mode. Top speed was 75 KPH. Back in the field, Sandy almost tipped over in the last 100 yards. She hit a bump with one ski but shifted her weight in time to save it. 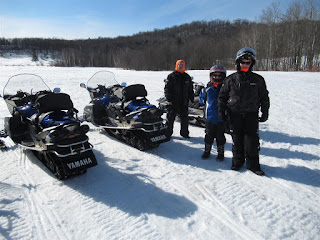 Back at the ranch

The second part of the adventure was for Jolene and Robyn to have a half hour riding junior sized Yamaha Snoscoots around a course in the field. Bob gave them some instruction and then had them follow him. Robyn had said she was a little afraid at the beginning but said afterwards that she got over it quickly. 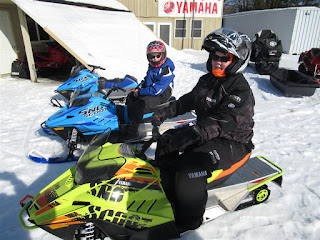 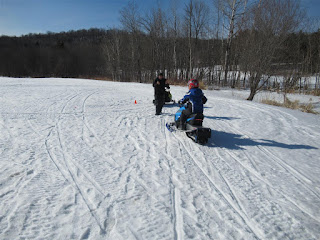 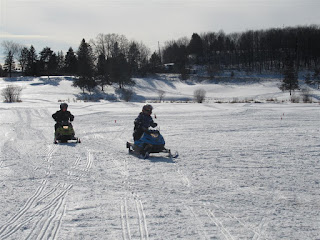 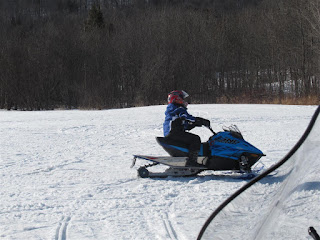 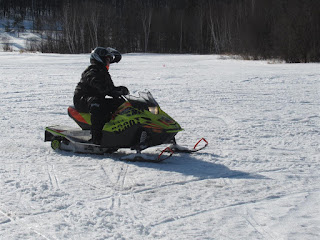 With the sledding adventure over, we went back to the room and got the girls' bathing suits. At the pool, Sandy and I just watched as they played in the water. It was fun to watch the two of them get along so well together. 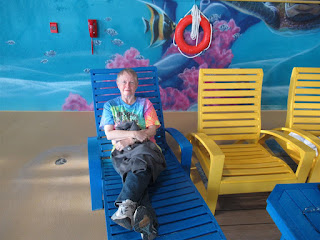 Grandma at the pool

Rather than look for something new, we went back to Chuck's for supper. Sandy and Robyn again split chicken fingers and fries. Last night, they found the fingers were pressed chicken instead of the real chicken breast they had in Cambridge. They thought this might have been a regional variation but the real meat was back tonight. A question revealed they had run short of their regular chicken yesterday.

Back at the room, we packed up as much as we could and I took it down to the car. My original plan had been to check out as late as possible and spend the afternoon driving back to Cambridge. However, all the weather services were predicting Snowmageddon, a severe blizzard with strong winds caused by a low pressure system originating in Texas. I figured that, in the odd chance that the weatherman was right for once, an early start would probably be safest. I set the alarm for 6:00 AM before we turned in.
Posted by Jim "Skid" Robinson on 2/25/2020