Bethel, Maine was originally known as Sudbury-Canada from 1769, when the land was granted to former residents of Sudbury, Massachusetts in recognition of their service in the Battle of Quebec, to 1796 when it was renamed Bethel. This was long before Sudbury, Ontario was even contemplated, so there was no confusion.

We were the first to arrive at the Sudbury Inn just before noon. They checked us in to our customary room, #21 on the top floor front. The two windows on the third floor in the photo were ours. We even had two window A/C units. I parked the car and trailer on the street and carried the bags up two narrow flights of stairs. 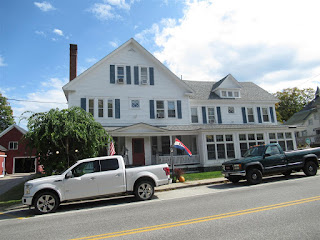 Pickup trucks are in our traditional motorcycle spot 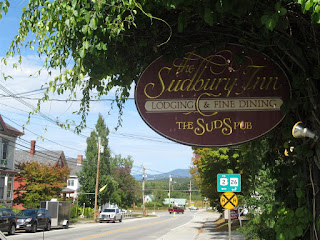 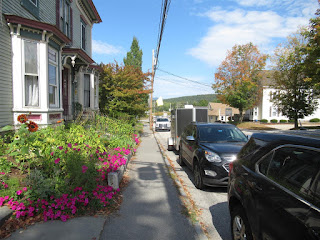 Overnight street parking is legal except in winter 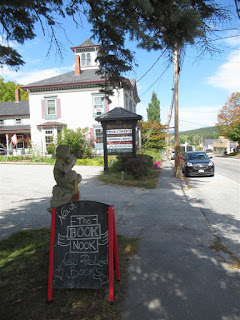 Bethel and Quaintness could be synonyms 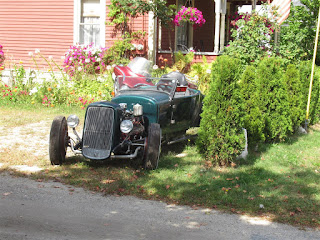 Once we were checked in, I helped the front desk determine which of the reservations were part of our group. Then I sent Boomer and Shannon, whose large diesel pusher RV had been in town for several days, a text and then went out and unloaded the bike. 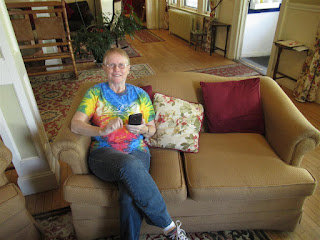 Sandy brightened up the lobby 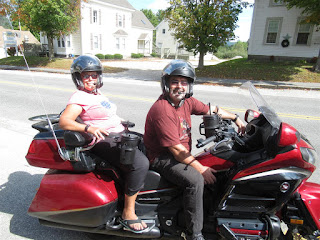 Not long after, Cheap B and Wanda arrived in their VW. Their path from Eureka Springs had included the Gateway Arch in St. Louis and Niagara Falls Ontario. Paul, also last seen in Eureka Springs, arrived from Connecticut on his Kawasaki Voyager while Ernie D, who we hadn't seen since 2012, rode in from Bristol, NH.

The group went down to the Suds Pub for lunch and refreshments. I tried the Reuben sandwich with fries, once again violating my dietary guidelines, while Sandy tried the New England clam chowder. There was a Harvestfest and Chowdah Cookoff on in town this weekend. 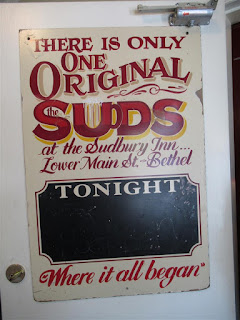 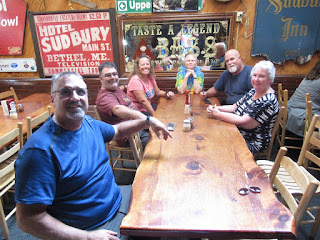 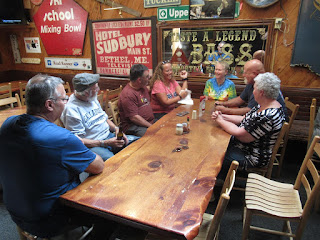 Lost Bob and Lorie arrived while we were in the pub. They were long time NEVROC veterans. Bob told us he had sold the bike a number of years ago after neck surgery and they were now traveling in a 1946 Chev pickup truck. The outside of the truck was 1946 while the running gear was more modern. Reliability was important because this was a daily driver.

U-Turn, the key organizer of this weekend, arrived from Boston with his cousin John. It sure was good to see him again after all these years. Our last NEVROC gathering was in 2012 and he hadn't been able to do much traveling since then.

Then Southern Draw pulled in as well. He left ES last Saturday and caught up with Wrong Turn, KT and their family in Akron. Today, he skipped visiting Mount Washington with them and came on ahead. 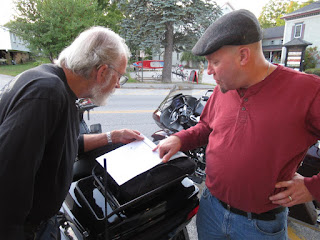 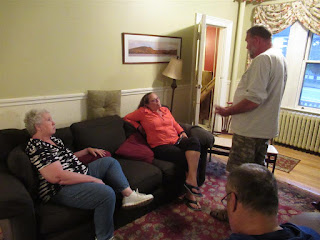 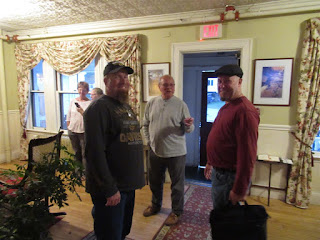 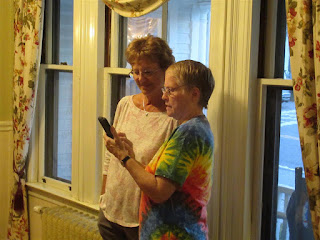 Southern Draw said he had left Wrong Turn, KT and their crew in Lincoln, NH. They were going to stop at Mount Washington and then come on over. Boomer & Shannon and I talked about riding out to Gorham to see if we could meet them. Or maybe we jus wanted to go for a ride.

I led across US Route 2 to Gorham and stopped at the NH 16 intersection, arriving about 5:00 PM. There was no sign of them, so we turned around and rode back to The Suds. The parking spots in front of The Inn were empty so we staked them out for our bikes. 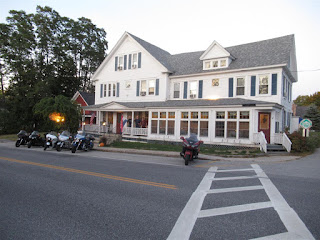 Our parking spaces the way it should be

Eventually, someone suggested supper. I planned on not eating but accompanied the crew down to the pub. Once there, Sandy persuaded me to split a small Hawaiian pizza with her while regaling all at the table with the story about the 7" Hawaiian she had last month at Fontana Village. It might be a Maine thing, but we had to ask them to skip the onions. And yes, pineapple does belong on OUR pizza but onions (and jalapenos in Arkansas) don't.

A few worked on trying some of the 29 different beers on tap while we wondered where Wrong Turn and KT had gotten to. But they were veteran travelers and epitomized the saying "Not all who wander are lost" so we weren't too worried. And then, suddenly, there they were. They had been eating at a BBQ place in Gorham when we made our reconnaissance run a while ago. In any case, the gang was now all here so we could rest easy. About half were Maine Ride veterans while the other half were first timers. 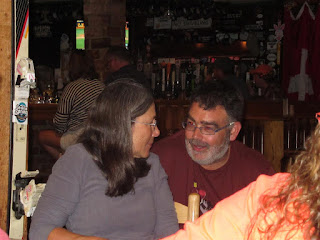 KT and Boomer catching up

We didn't stay up too late. U-Turn said we would be KSU (kick stands up) for the actual ride at 9:00 AM tomorrow morning and breakfast started at 7:00. With that in mind, Sandy and I climbed the three flights of stairs (from the basement pub) to our room in the roof and turned in.
Posted by Jim "Skid" Robinson on 9/20/2019