The weather man, notorious liar that he is, forecast an unusually nice Saturday for mid-October. This gave the Freedom Riders the opportunity for one final ride together. For me, it would be my last ride as a local member of the club, although Sandy and I will remain members no matter where we live. 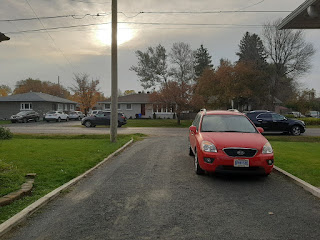 It was warmer than it looked
A good sized group gathered at Tim's on Levesque Street and, once President Rob arrived to lead us, we headed east on Highway 17. The plan was to ride to North Bay and then ride up Highway 64 to Highway 533, which we would then take southeast into Mattawa. This was the reverse of the route we had ridden earlier in the season.
I took up the last spot to keep an eye on the group. As we passed through Hagar, Fabien and Laura joined us, she riding her new Spyder. Then we stopped at the Tim Horton's in Sturgeon Falls where we were joined by Greg, someone I had met on the Facebook group Let's Ride Sudbury.
The ride to 533 was uneventful. Once we turned onto that road, which is more interesting than most in the area, the group spaced itself out as each rider set their own pace. It took a while for me to work my way forward from my spot at the back but eventually I got clear and followed Rob to Mattawa.
We fueled in Mattawa and then stopped at Myrt's, a local landmark for as long as I have been coming through here, for lunch. 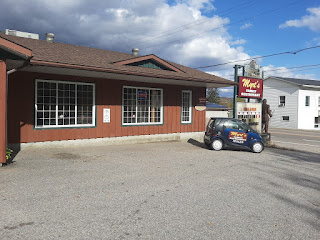 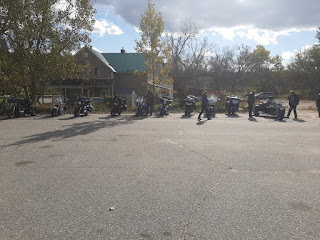 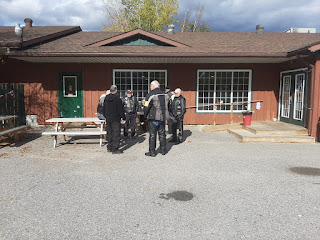 Masking up to go inside
The ride back was pleasant and a little melancholy because this was probably going to be my last time on the bike this season. We stopped at the other Tim's in Sturgeon Falls (yes, the little town has two) and said goodbyes to the folks who would be leaving us before we got back to Sudbury. 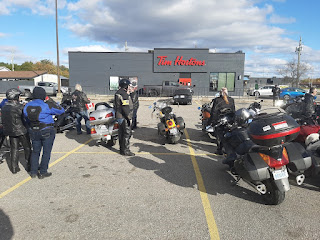 We got back to Sudbury in good time and I stopped to fuel the bike again before taking it home and parking it in the garage.

I will miss the Northern Ontario terrain but I expect that I will have a lot more riding options in the south next year.