Since the run to Woodstock last week, we had made great strides in reducing our worldly goods. Darren contacted us a few days ago to see if we were interested in moving the closing date on the house up again. I told him that we could do November 15th if we could leave a few things in the house rather than cleaning everything out. The buyer agreed.
It was now the end of October. Both Halloween and taking possession of the condo were upon us. We decided to go to Woodstock today for Halloween with grandkids (suitably distanced) and then meet Alex at the condo tomorrow morning to pick up the keys.
Marie and Ron came by with their trailer to pick up the master bedroom set Sandy had sold to a friend of theirs. We also loaded them up with any other goods they were willing to take and struck a deal on our snowblower. Then we stuffed as many boxes and essential goods as would fit into the Equinox.
Just after noon, we set out for the south. Imagine our surprise when we reached the end of the four-lane just before the French River and were unexpectedly directed onto the new highway. Rather, we were on half of it, as one side of the new four-lane road was opened for two way traffic. The were on new pavement most of the way to the Grundy turnoff including crossing the French and Pickerel Rivers on new bridges.


We stopped in Parry Sound at McDonald's for coffee and a bathroom break. It was really a chance for me to wake up again. The rest of the way to Highway 401 in Toronto was uneventful except for one stretch at the Aurora exit on 400 where I suddenly noticed the 80 KPH reduced speed sign. Looking down, I saw that we were doing 132 which could trigger a seven day licence suspension and vehicle impoundment (50 KPH over is where this draconian roadside justice comes into play). I slowed down.
We chose the Toronto/401 route because it was Saturday afternoon and we expected traffic to be reasonable. It was, although we saw eastbound traffic in Mississauga held up by police, ambulance and fire vehicles. There was no evidence of a wreck, just a few unmarked pickup trucks. RIDE check? COVID checkpoint? We never did find out.

We took a detour through Waterloo so I could show Sandy our new home.


We arrived at the Best Western Plus in Woodstock just before 6:00 PM. After checking in, we headed over to Heather and Tom's where a modified Halloween was underway. Heather, Sandy and I walked the neighborhood with Jasper and Fiona as they visited homes which creatively dealt with the Trick or Treating under COVID conditions.

After we finished the walk through the neighborhood, where a surprising number of houses were still offering the kids candy, we went back to the house and spent some time with the Jasper and Fiona. Then we returned to the hotel after making a stop at a Subway to pick up something for supper. 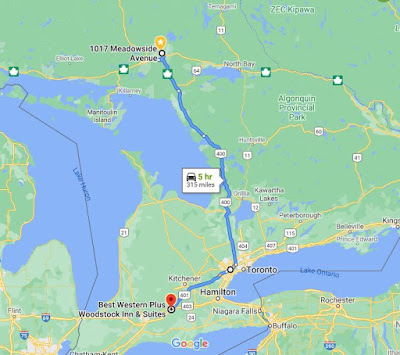