It was still unseasonably warm in Grayling when we climbed on Quicksilver for the last day of the trip. I didn’t realize that the south end of town fed directly into the southbound I-75 so we took a little warm-up run down to the next exit before flipping over and headed north.

The leaves are changing colour in a sporadic manner. Some areas between Grayling and Gaylord were ablaze with reds, oranges and yellows, but most trees we saw were still green. I guess the 80 degree temperatures have them confused. I know I am.

We stopped for fuel at Mackinaw City and then assaulted the Big Mac. As usual, the outside paved lane was closed for maintenance and we were forced onto the steel grate centre lane. However, as I have found throughout this trip, the last vestiges of my anxiety when riding are gone. This is the first time in a long time that I have crossed this bridge without having a single twinge. Life is good.

They are doing a lot of work on I-75 in the Upper Peninsula. This was badly needed since this road had been making me think of the cowpaths that Sudburians travel on. Someday soon, it will be a fine place to travel. As we approached the Soo, we came under some serious looking cloud cover. Fortunately, the border crossing was quick and trouble free. This is the 16th time we have crossed this year.

As a strange tie-in with Sherm’s trip home, the passed through Albuquerque, New Mexico while the balloon fest was in full swing. The big news in the Soo was that a balloon from the festival, trying for distance, had come down near Ranger Lake north of town when they ran out of burner fuel. Apparently another one came down north of Thunder Bay. The crews were fine and I guess both bush locations beat a descent into Lake Superior.

We stopped at Mom’s for a bit for coffee, lunch and catching up on some details. Dave is doing well and has made it back to Edmonton. Keeping and eye on the weather, we left after noon.

Forty miles east, the clouds let up and we found blue sky again. Near the old round barn, I saw this clump of brightly coloured trees surrounded by green. 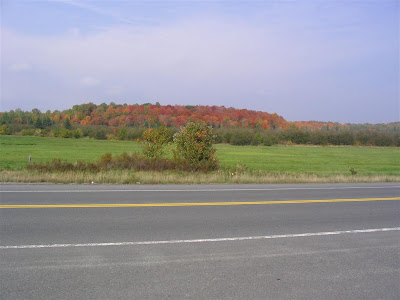 We stopped at the OPP detachment in Blind River looking for a friend, but she wasn’t there. Then there was another pit stop at the scenic picnic area alongside Serpent River. 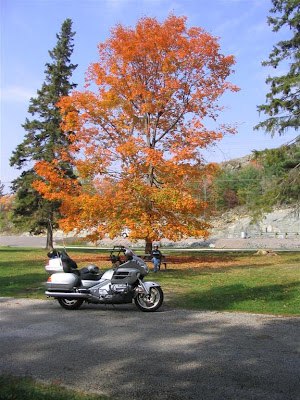 The rest of the trip was uneventful but a little bittersweet since we won’t be riding anywhere else, other than a few local rides, until spring.

This will probably be our final bike post of the year. This Blog was intended to just cover 2005, but I just changed the title bar and will continue to use it next year. I’ll spend the winter re-reading what I wrote this year. Also, stay tuned because I expect I may add some snowmobile trips and other winter travel to the Blog in the meantime.
Posted by Jim "Skid" Robinson on 10/04/2005 No comments:

We headed out of ES about 8:00 AM Central Time. With the sun in our eyes, we threaded our way back up to Branson via 21, 13 and 86 taking care because it was deer time. Didn’t see a thing this time.

We hauled up Highway 65 with a brisk tailwind and swung east on I-44 at Springfield. After fuel and a Mickey D breakfast, it was a straight and uneventful haul to St. Louis. I normally cruise about 125 KPH (75 MPH), but that wasn’t fast enough for this road so I hiked it up to 130. It was warm enough that we stopped briefly to remove the jacket panels and go to mesh.

In a gas station near St. Louis, we met a couple from Michigan on a ’05 Wing. They had a ’03 but won this one at the Honda Hoot. Not bad. Straight through St. Louis with clouds threatening to the north and on across Illinois. There was a brief shower at one point but it cleared. We stopped for the night in Terre Haute Indiana at another Drury Inn. I had been listening to the NASCAR race on the radio and was able to catch the last 30 laps on TV after we checked in. Then it was off to Cracker Barrel for supper.

This morning was warm and clear. We had the hot Drury breakfast and then loaded up and continued east. Indianapolis, Fort Wayne, Lansing. Traffic was still not bad and moving briskly. One thing we did notice as the radio kept reporting near record high temperatures was that the leaves had not changed as much as in prior years.

We decided to stop in Grayling, Michigan for the night. This is a small place with several hotels and restaurants. At 6:00, the temperature reading in front of the bank was still 81F. After supper at Patti’s Restaurant, with good food, large portions and friendly service, we watched some TV and then turned in for the night.
Posted by Jim "Skid" Robinson on 10/03/2005 No comments:

We held the Memorial Service to remember fallen members at the Iron Horse this morning. Dino Hutchings presided over the service and Piper played Amazing Grace. Sherm has some photos in this new Blog: http://estrippart4.blogspot.com .

After the service, Sherm and K&P took down their campers and prepared to head out. We headed for the Smokehouse Restaurant on the far side of town, but they were busy and it looked like we wouldn’t have seats for our nine people anytime soon. We headed back across town through what was now sever thousand Corvettes to the Sheraton Buffet. Breakfast was great. Near the end of the meal, the Oregonians slipped away and hit the road.

Sandy decided to take a nap back at the room to see if she could shake a headache, so I went riding with a group on some twisty highways south of ES. Some of you may remember my difficulties with corners. I’m happy to tell you they are behind me. The last stretch, I rode second behind Brillo. There are two versions to this ride. Snake contends Brillo tried unsuccessfully to shake me off his tail. I maintain that Brillo and I took a leisurely ride and, for some reason, the others didn’t keep up.

After getting back, Eagle gave us a scare as he started having bad chest pains. He has a coronary history. I’m grateful that Ron “Buck” Prior was there since he has been through it and took charge. Six Pack Jack Ward, our motorcycling MD, was called down and checked Steve out while an ambulance was summoned. After an evening in the Berryville medical facility, Steve was released with a diagnosis of angina. He was back at the fire before bedtime. He has been under a lot of stress this week as Kelly’s right hand man. Steve is a good friend and a great guy and we’re glad it was only a scare.

We spent the evening talking around the fire. The last night is always bittersweet as we know the end of the gathering is upon us. Much of the time is spent talking about when we will get together again. There was a NANMRA run. This is the North American Nude Motorcycle Riding Association, and this was the first time I cane ever remember a two-up ride. The riders shall remain nameless, but rest assured they were NOT on a GoldWing.

Finally, about midnight, we bid the remaining people good night and turned in.
Tomorrow we head east.
Posted by Jim "Skid" Robinson on 10/01/2005 No comments: