I used to play golf regularly.  For many years, I was a member at Cedar Green Golf Course just up the road from my place in Garson.  Of course, being a serious golfer does not, in any  way, imply that I was any good at it.  My handicap was about 18 for much of the time.

Lately, I only see golf courses as I pass them on the highway.  Last year, I played one 18 hole round and this year never set foot on a course.  Until yesterday.

Imagine having weather in late November good enough that not only were the golf courses open, but the greens were in play.  Leo called and asked if I wanted to go so I packed up the trusty (rusty) clubs, picked him up and we headed out.  All we had time for was 9 so, with no one in the pro shop, we took an available cart and started out on #10.  At Cedar Green, the back 9 is more forgiving and I was certainly in no position to up the challenge.

I wish I could say it was a great round and that I was brilliant, or even competent.  But that would be too much  to hope for.  As it happens, I hit a few good shots and my putting skills sucked.  On the plus side, I didn't lose a ball until 18.  And I had fun.

Today, we went back and played the back again.  Lost more balls, putted a little better and still had fun.  next summer, when I get a few days at home, I think I'll get out on the course instead of just sittting around and vegging out.

We were on our way at 7:00 AM, retracing our steps through the dark pre-dawn morning.  As the sun came up and we progressed through Michigan, my eye was drawn to a "Don't Veer For Deer" sign.  I had never seen one before but the trusty Internet tells me that this is a new and successful safety campaign.  I'll keep that in mind but will probably continue to veer for moose.

At the Soo, the US bound traffic was backed up as the poor design of the truck lanes continued to block cars.  On the plus side, the Canadian side was empty and we drove right into the one open lane.  The agent never even asked for our ID. Has asked about citizenship and time away and then waved us through.  I think he was eating lunch.

There were many bikes out in the Soo enjoying another unsual November day.  We stopped for a brief visit with Mom and then headed home, arriving in plenty of time to drop Sandy off and get changed into my STOP uniform for the parade security duty.

It was a sad occasion to have to travel for, but the VROC family comes together in tragedy just as willingly as it does for fun and games.  I sometimes wonder where we would be if we had never found VROC but I am unable to imagine the answer.
Posted by Jim "Skid" Robinson on 11/14/2009 No comments:

North on 26, Friday night traffic was busier but we got to US 41 sooner than I expected.  There was heavy traffic through Oshkosh and Appleton but it tapered off once we cleared Green Bay.  The Marinette detour was no longer in effect so we kept on 41 right through town.  We arrived at the Super 8 in Escanaba about 10:00 PM, checked in and went right to bed.
Posted by Jim "Skid" Robinson on 11/13/2009 No comments: 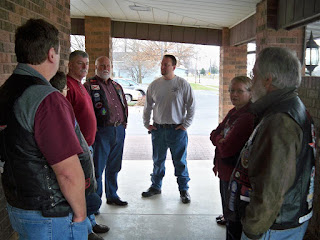 Sandy and I headed out to Jefferson Wisconsin today for Chunk's memorial service.  We left Sudbury just after 10:00 AM on a clear day interspersed with ice fog.  Westbound on Highway 17, the GPS said we should arrive in Jefferson at 8:15 PM.  A number of people indicated they were on their way and the hotel of choice was the local Rodeway Inn, where we had reservations.  I need to be back in Sudbury by Saturday afternoon because STOP is assisting with security for the annual Santa Claus Parade.

I saw what I figured was a good omen yesterday.  I was at the Pioneer gas pumps with the Wing topping the tank up and getting the SeaFoam worked through the fuel system when a Pearl Purplish Black Mica Nomad, identical to our last bike, pulled in for fuel.  I had a pleasant chat with the owner and told him that mine had been very reliable over the 132,000 Kms that I rode it.  I don't know what this omen portends, but it was a positive one.  I'm not even sure why I ascribe any significance to what are merely coincidences, but they have seemed to have had meaning to me over the years.

We crossed the International Bridge at 1:35 PM.  I warned the border agent he would probably get a hit from my NEXUS card.  He asked what they usually do when they get a hit, yank me out of the car and slap me up against the wall?  I told him no one had done that so far.  He laughed, gave me the ID's back and sent us on our way.

There was more salt on Michigan 28 that we use at home.  They also use rumble strips on the centre line as well as the shoulder, a great idea to aid tired or distracted drivers.  The ride was rough because I still had the 36 PSI in the tires from the wedding trip.  This hasn't yielded any better fuel mileage so I cut them back to 30 PSI in Gladstone, Michigan, improving the ride.

I forgot we would get an extra hour when we went to Central Time near the Wisconsin border.  Lucky us as the sun was just going down.  There was a detour off US 41 in Marinette which led to a new four-lane section that by-passed Oconto.  The only disturbing thing was the number of dead deer on the side of the road, their carcasses just visible in the headlights.  Typical Wisconsin evening.

The drive through Green Bay, Appleton and Oshkosh was uneventful and, after that, the two lane Wisconsin 26 was no problem.  There was little traffic and it was a bright, clear night.  Slammer called to say that they would be at the Towne Inn, just up from the Rodeway.  We found it soon after rolling into Jefferson, billed on the welcome sign as the Gemuchlichkeit City.

The crowd of the usual faithful were having supper when we got there.  Stewey (Illinois), Slammer (North Carolina), Furhead (who lives nearby), Cheap B (drove all the way from Alabama), Didsbury Dave & Pebbles (who flew from Calgary) and Wrong Turn (West Virginia) and KT (Indiana, Wrong Turn picked her up on the way here).  If I have to share a sad occasion, these are the people I want to share it with.

After supper, we adjourned to the Rodeway and Sandy and I checked in.  Then we hung out around a table in the lobby sipping some Maker's Mark and reminiscing until it was time to turn in.