A Less Than Perfect Summer

You will note that there hasn't been anything posted between the middle of July and the end of August. July the 15th was a day that will live in infamy. Not only was it the day four Freedom Riders bikes out of a group of eleven wrecked on Highway 60 in Algonquin Park (six injured but none critically), it was the day I decided to wash the motorhome. In a moment of abject stupidity, I climbed the stepladder without Sandy holding it and fell off. I landed on the pavement with my right heel while my left shin came down on the ladder. It cut me, leaving me with a gaping laceration that nicked the muscle.

After five hours waiting in the emergency room, a doctor finally showed up. He put four stitches in the wound and sent me home. What he didn't see was the bleeding inside the leg. This caused a build-up of pressure and, every time the elevated leg got lowered, the pain would hit 8 on a scale of 10 for a few minutes as the fluids put pressure on the nerves. To top it off, the stitches didn't hold and my doctor said it would be a long, slow process filling in.

I spent the next two weeks lying down with the leg elevated, trying to get up as little as possible due to the pain. When it came time for the Freedom Rally weekend, starting on July 29th, I had no choice since I was the head bean counter and was responsible for some other functions. We moved the motorhome down to the campground and I worked through the pain. Amazingly, the second morning I got up and the intense pain wasn't there. If I was up too long, a burning set in and I would get horizontal for a while. I managed to get through the weekend and the rally was a success, too. 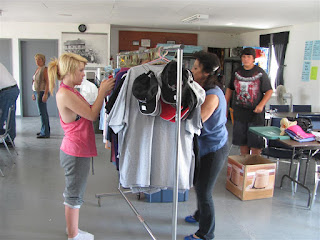 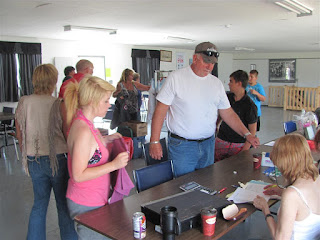 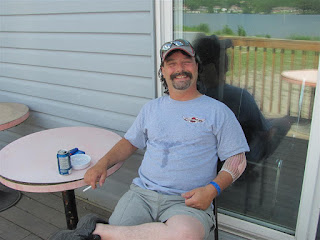 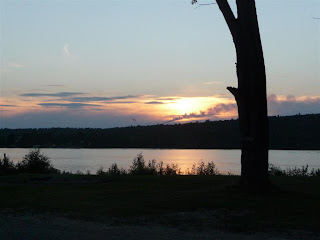 Sunset over Richard Lake
Following the rally, Sandy started to have symptoms of an MS attack, losing feeling in her lower body. We have no idea what triggered it but the excessive heat on our June trip may have been the culprit. The problems are still persisting but we are hoping it is merely a temporary exacerbation. She has an appointment with Sudbury's only neurologist in mid September.

Our Interlochen trip for the weekend of August 11th was cancelled, the first time we have missed this gathering. Unfortunately, my leg still wasn't up to riding. Instead, I celebrated by dealing with a tooth abscess. On Monday, my dentist confirmed it and prescribed antibiotics to knock down the infection. I had a scheduled appointment for the 29th and he said we would do a root canal then.

On the 12th, I mowed the back yard. When I was done, my right hip started to hurt. It is fine unless I walk and then I get a stabbing pain just above the right butt cheek. Three weeks later, this is still a problem. I'm not sure whether a doctor or a chiropractor would be the correct choice, but I need something.

Sandy and I did get back on the bike finally on August 17th to go and make donations on behalf of the Freedom Riders to the Sudbury Manitoulin Children's Foundation Send A Kid To Camp program and the Diabetes Association Camp Huronda. It felt good to be back on two wheels but the leg complained by the time we were done.

On the 20th, we managed to make it to Gord and Shirley's annual corn roast. This is for their friends including Freedom Riders and others. It was a fine evening and the food was excellent. The leg was better but the hip still hurt. 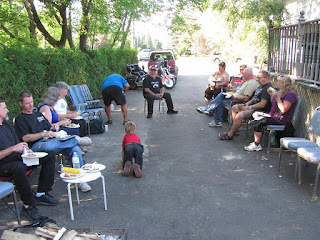 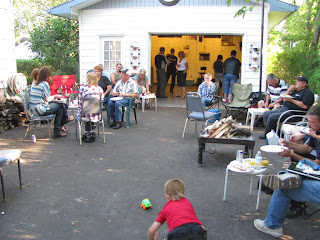 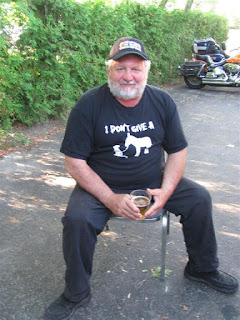 Our host Gord
The next day, Sandy stayed home but I went on a charity ride to support the Vale Hospice. It rained a bit at the start but then cleared up and I was able to make it all the way on the ride. 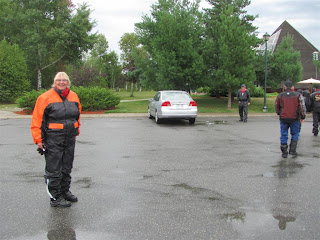 Nicky in the rain 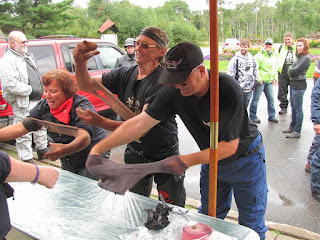 Leo playing a silly game with pantyhose and pennies 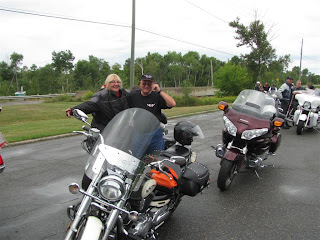 Nicky and Leo at our first stop 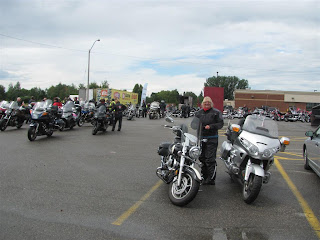 Nicky at our second stop 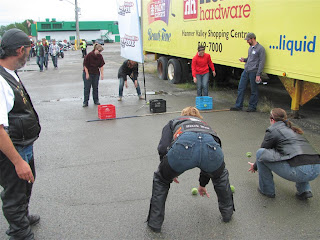 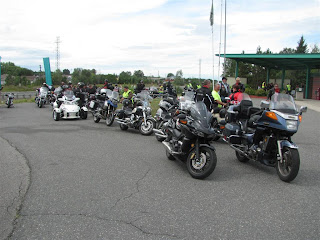 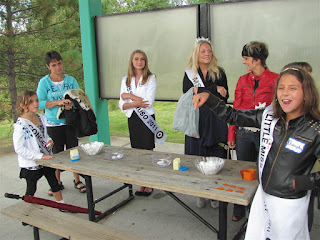 Trying to get people to play yet one more silly game
One good think about the whole sad period was that the root canal on the 29th went very well. I have an appointment in late September to finish the job with a permanent filling.

So here we are at the end of August. Summer has slipped away and I am left with a leg that is still healing very slowly and a hip that hurts like hell. Sandy is still numb. It could have been a much better time. But then it could also have been much worse.
Posted by Jim "Skid" Robinson on 8/31/2011 No comments: