It seems the plug on the stator was worn and a couple of the wires shorted out. Considering that age can contribute to this and the fact that it is a 1998 MXZ 440 Fan, I'm not surprised.

I also had them fix the loose snow flap that was getting hung up on the top of the track.

The surprising thing is that they have ordered a new primary clutch for me. It seems that there was a clutch recall that is still in effect, so I get a new one free. It should be in next week and they say they can turn it around on the same day.

I got a new mirror to replace the one I broke. In fact, I got two since they sell them in pairs. I hope the next one I break is on the left. After installing it, I'm still trying to figure out why the nuts were 7.5mm. Who has tools for that? I used a 9/32nds socket but it was a bit loose, too. Anyway, the mirror is on and working fine.

Today, Terry and I rode with CN and City police. The shakedown run was about 221 kilometers (138 miles) and it all worked just fine. Lately, we've been riding fairly reasonable and I've taken to sitting relatively passively. Lazy. Today, I went back to my sliding and hanging off style, common among older riders, and felt much better in the tighter and higher speed corners. It's a good practice even when riding conservatively because it makes you ready for the unexpected.
Posted by Jim "Skid" Robinson on 1/21/2009 No comments:

I went down to Cambridge/Waterloo on Sunday to bring Sandy home after almost three weeks of her being down there helping Kim with the new granddaughter.

We managed to get a few photos of the family while we were at Kim & Mike's. 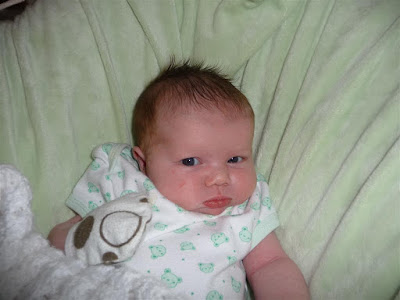 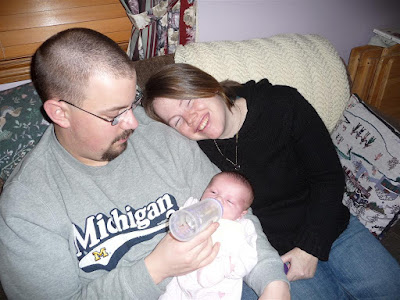 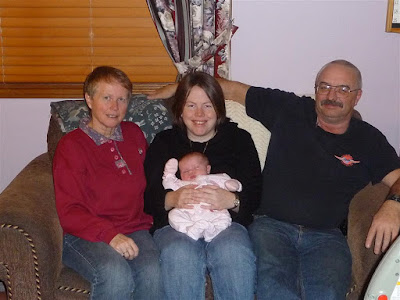 Mom and the Grandparents
We stayed down Monday to attend an open house at the Black Forest Inn, where Heather & Tom will be getting married next October. We were able to check out the setup, the wedding cake options, desserts, photographers, DJ's and limousines. 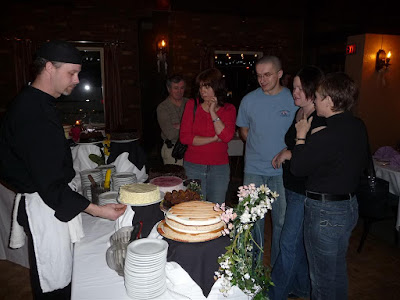 Tom's parents Stan and Sofia, Tom, Heather and Sandy check out the dessert offerings
After seeing what there was to see, Sandy and I took Heather & Tom to supper at the Daily Grill.

It was snowing this morning when we left Waterloo. As usual, a number of vehicles had planted themselves in the ditch. We drove up through Elora, Fergus and Orangeville and then stuck to Highway 9, trying to stick with the clearest roads. Snow eased up as we approached Highway 400, but continued lightly all the way home.

Once home, the temperature was dropping as I took the wounded snowmobile over to Algonquin Equipment, the local Skidoo dealer, and then came back and cleared the driveways with the snow blower. That finished off my motivation for the day.
Posted by Jim "Skid" Robinson on 1/13/2009 No comments:

Today was my third STOP shift this season. I was out with Francis, our fine O.P.P. coordinator, on Wednesday and Thursday. Today, we met at 8:00 at the Great Sudbury Police facility in Azilda. It was still quite cold when four STOP guys and a GSPS constable headed out.

First incident happened as I was leading from Azilda to Chelmsford. The trail was tabletop flat as I rode tight to the right side. Then there was a whack and a sapling removed most of my brand new right hand rear view mirror.

We patrolled Chelmsford, Azilda and Garson, stopping well over 100 sleds. Most were just fine. Then, on the way back to Azilda about 6:00 PM, in the pitch dark, the MXZ lost all its lights. No headlight, taillight, brakelight or instrument lights. And no tach, backup beeper or heated grips. But it ran fine and the electric start still worked.

I followed one sled back to Azilda with another guarding me from behind. We got in, loaded on the trailer and took it home. A phone call to my usual fixer, Charlie, led me to believe this was a stator problem and it would be necessary to take it to the dealer. I'll do this when I get back from down south on Tuesday.
Posted by Jim "Skid" Robinson on 1/10/2009 No comments:

I drove down to Cambridge yesterday. Sandy has been there since before Christmas. Left Sudbury about 10:45 AM in greasy conditions. It squalled to south of Parry Sound, then was clear to Toronto. I splurged and took the 407 to save time, meeting more snow squalls when I joined the 401. I arrived at Kim & Mike's about 3:30.

One strange thing I noticed as I was crossing north of Toronto on the 407 was a flock of Canada geese flying NORTH. I wonder if they know something we don't?

This morning, Heather & Tom came in from a social engagement in Brantford and were at Kim & Mike's by 8:00 AM. We drove in a two vehicle convoy to the International Centre in Toronto, stopping at the Mickey D's in the service centre on the 401 for breakfast.

The show opening time was 10:00 AM and, for once, we arrived early. At 9:30, there were many places not to far from the front door to park. I'll have to try this more often. We bought our tickets and joined the crowd in front of the doors, waiting patiently. There were eight doors, but they only opened one. Now I know how oil feels trying to flow through a funnel.

We wandered the show with no plans to buy anything. Saw a number of friends. Tom wanted to see the new Vulcan Voyager, but the manufacturers don't do this show and the dealers didn't have the prototype I saw at the last show. I skipped the ORRA meeting that usually consumes a bunch of show hours. There was an Ontario Traxxion vendor there. He was surprised by my Traxxion shirt, since the conversion is rare up here in Canada, and his buddy wants to buy the highway pegs I took off the Wing.

By 3:00, we had seen all we wanted to and our feet hurt. We left the show, dropped Tom's car at the Mandarin where supper would be at 7:00, and drove around. A tour of the houses in Woodbridge around the National Golf Course was enlightening. A number of these huge mansions are boarded up. Some are being renovated and others look like they might be foreclosures. We cruised Vaughan, stopping at Tim's for coffee, until it was time to head back to the restaurant.

The Frozen North (Great Lakes) VROC crew have been meeting at the Mandarin bike show weekend for as long as I've been a member. The buffet is great and we need some mutual reassurance in the middle of winter. Turnout was small this year, but the company was good. 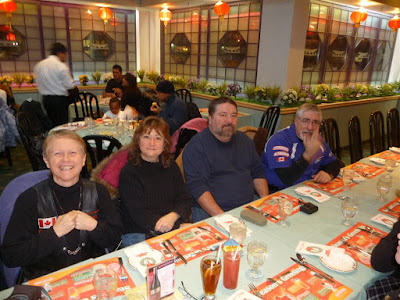 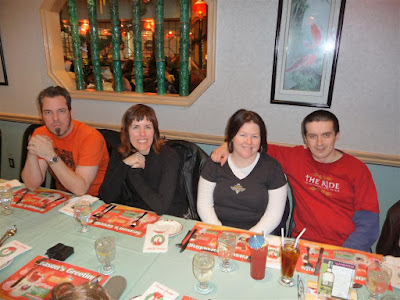 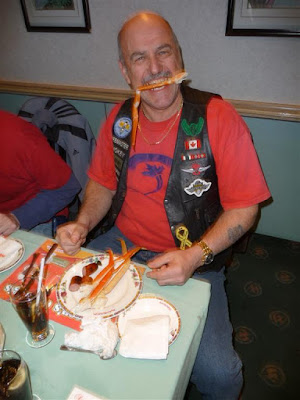 Mike (RCAF) paying homage to our crab fishing friend, Bandit
I ate light because, unlike usual, I had to head back to Sudbury tonight to attend an O.P.P. Use of Force training session tomorrow. Stonewall was supposed to have his dinner paid by me tonight since he beat me in the VROC NASCAR Fantasy League last season, but he didn't show due to work requirements.

It was nearly 9:00 when I got my bill and settled up. Sandy joined Tom & Heather for the ride back to Cambridge while I headed north. The road was clear and, north of Barrie, the traffic was light. I passed one semi going my way between Waubaushene and parry Sound, then hooked up with a couple of other cars for the last hundred miles. Got in to Sudbury just before 1:00 AM.
Posted by Jim "Skid" Robinson on 1/03/2009 No comments:

The year 2008 has come to a close. In retrospect, Sandy and I had a good year but it wasn't so kind to many others.