We didn't put pictures in the Blog Last year. There were some links to our Yahoo album, but it didn't have the same impact as having the pictures right there. I'm playing with the Blogger options to try to figure the best way to do this. If you click on these pictures, you will be able to see them in their original size. 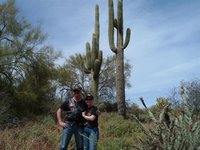 Jack Foree took the picture of us in front of the large saguaro cacti on a the ride down from Holbrook Arizona to Mesa in April, 2005. These were awesome plants and are the first thing I think about when the Southwest gets mentioned. 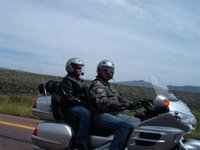 Sherm took this shot of us a few days later as we were riding back to Mesa after a loop of Prescott, Jerome and Cottonwood. This was the last trip for the old leather jackets since we went to textile Joe Rocket Alter-Ego jackets on our return home. 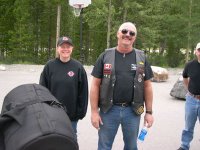 I don't know where this was or who took the picture, but it looks like we were having fun.

So hopefully, the Blog will be richer for the photos this season. Now we just have to slow down long enough to take some:-))
Posted by Jim "Skid" Robinson on 4/23/2006 No comments:

Doug Dandeno came over yesterday to pick up a tour pack I was selling and shamed me into unleashing Quicksilver. The Wing fired up immediately and I put the appropriate covers on and checked the tires and oil. A quick shaedown ride to Falconbridge proved everything was working and then Sandy and I made a short loop.

Today, a warm and clear day, I headed out to Garson and then down the Garson-Coniston Road. This is a fun stretch with a few decent curves. I was following a new Victory 8-Ball that turned onto the road just ahead of me. At the end of the road, we fell in together and made a forty mile loop out to Whitefish and back to Timmie's on Lorne Street (where the bikes hang out). The rider, Joe Cecchetto, and I spent some time talking bikes and things before I had to head home.

Sandy and I rode to the Freedom Riders monthly dinner tonight.