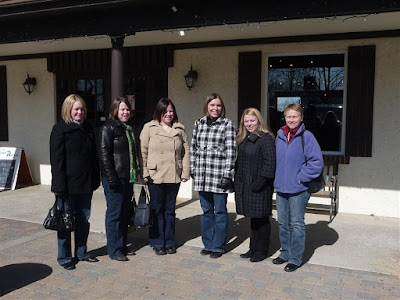 Heather decided that this would be the weekend to look at bridesmaid gowns. Sandy wanted to be there and see if she could find a mother of the bride dress at the same time. Great. Besides, we hadn't seen Jolene in quite a while, so southward we would go.

Of course, the winter weather wasn't going to co-operate, as usual. After a fine week, they called for a winter storm Thursday overnight and Friday morning. Lots of snow interspersed with a bit of rain and then a flash freeze. Further south, it was supposed to rain all night and then freeze. I went to bed Thursday night somewhat apprehensive.

Friday morning dawned nothing like the forecast. It never got warm enough for rain so the flash freeze was out. There was more snow, dropping temperatures and a driving north wind that made some pretty substantial drifts. The snow texture was neither light nor wet and was packed by the wind solid enough that it would be ideal for igloos.

I planned to wait until the snow stopped, clean the driveways and then head south, hopefully before noon. In the meantime, I set out about 6:30 for the YMCA for my morning workout. It took three runs to get out of the driveway. Then because the plows were working on the main roads but ignoring the side streets, it took three more tries to get out of the subdivision. At that point, surrounded by whiteouts and stuck cars, I gave up the workout idea and went and fueled the van. Then I went home and watched the weather radar.

About 8:30, the radar showed our snow should be ending. Sure enough, the sky brightened but that wind kept howling. I put on full snow gear and started blowing our driveway and the neighbor's. 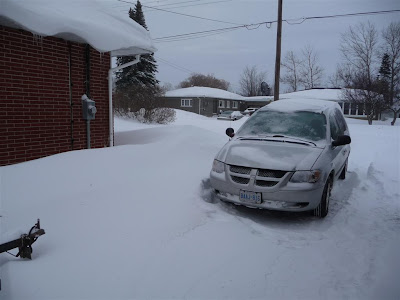 Our driveway, not showing the big drift on the other side of the van
It took a while, but eventually I blew the snow about three doors away. The plow will come along while we're away and I'll be faced with another mess when I get home but there was no point in worrying about that right now. We packed extra warm gear just in case and headed south about 9:45 under clearing skies.

A couple of years ago, the Ministry of Transportation installed what they call Compass Signs on highway 69. These are the overhead signs with the messages they can program from some secret central location. Usually they say "Buckle Up" or "Watch For Moose" or something equally banal. I don't even look at them any more. Lucky Sandy was watching as we were leaving town because this time it told us Highway 69 was closed at Highway 64, about 40 miles south of town. Unlike other places, there are no convenient alternate routes available.

I called my father-in-law and he looked up an 800 number for MTO. I phoned them and was told that the closure had just come up but they didn't know why. Then I phoned the OPP regional HQ and found there was an accident at Point Au Baril and they were still waiting for the technical investigators. There was no estimate how long the road would be closed. The detour is across to North Bay and down Highway 11, adding about 75 miles to the trip. But, thanks to the Compass warning, we didn't drive 40 miles south and then have to backtrack. 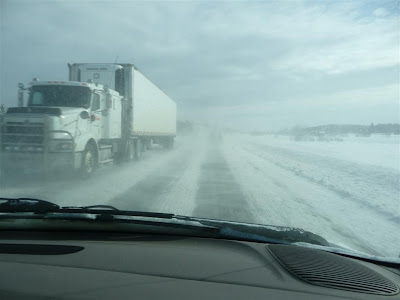 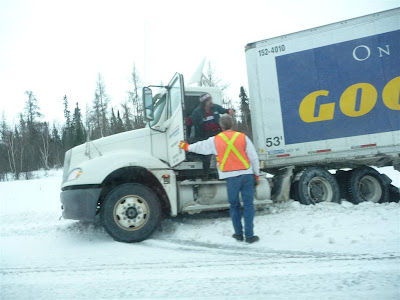 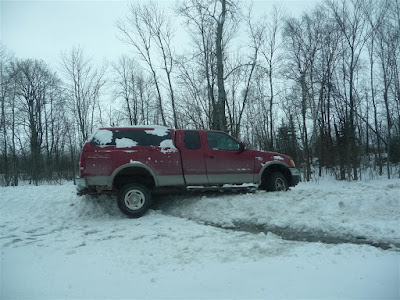 Some people seemed to be having trouble with conditions
Travelling around North Bay, Highway 17 was very icy. No problem as long as you don't make any sudden moves. Like stopping or steering. Once we headed south on Highway 11, traction and visibilty improved. 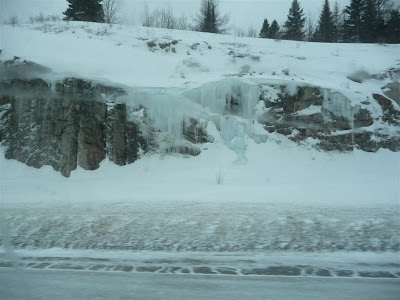 Many rock cuts have pretty ice formations
Near Gravenhurst, the roads cleared completely. South of there, the snow started to disappear. We skirted Toronto just before rush hour and got into Mike and Kim's about 4:30. After being drifted in in Sudbury, here's what Cambridge looks like. 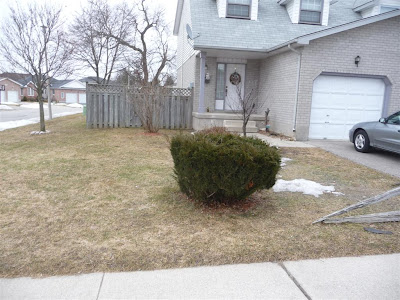 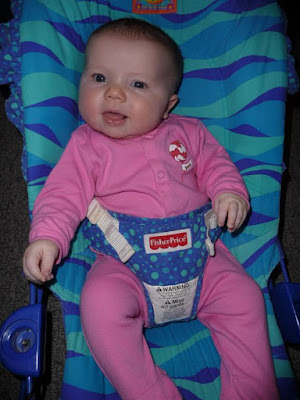 This was the first time we've seen Jolene face to face in over a month. That's half her life. I don't want to be one of those bragging grandfathers, but she is the prettiest and pleasantest baby I've ever seen.

We'll take it easy tonight and tomorrow the dress wars begin.
Posted by Jim "Skid" Robinson on 2/27/2009 No comments: