It was below freezing most mornings recently, including today. Sandy and I were off to Bolton, just north of Toronto, to meet Kim and Jolene at Fairytale Dreams & Destinations to plan a fall trip to Disney World. We had an appointment for noon.

We took Sandy's little red Kia to save gas, leaving town at 7:15. The new GPS telling us we should arrive at 11:00 AM. The car is nice but I miss my satellite radio. There wasn't a cloud in the sky when we stopped at the Tim's south of Parry Sound for a bathroom break. 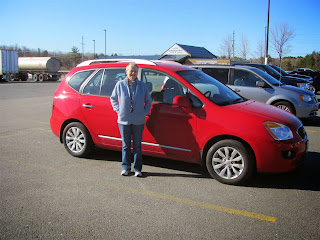 Sandy and her car

We could still see some snow in the bush on the north facing hills. Mount St. Louis ski hill north of Barrie still had a lot of the white stuff visible. The summers seem to be getting shorter as I get older. 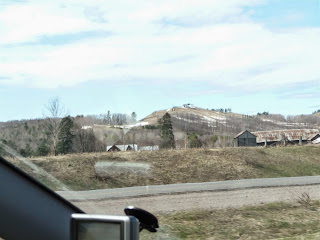 We arrived in Bolton at 11:00 AM, as predicted. We waited at the McDonald's across the street for Kim and Jolene, who arrived about 11:30.

Christina, the owner, arrived at noon sharp and we sat down to do some planning. Her outfit specializes in all things Disney. We ended up booking seven nights for the six of us at the Contemporary Resort starting November 1st. Tina will work out our itinerary, saving me the trouble of researching everything like I had to do on our three previous visits. We will fly out of Toronto direct to Orlando on West Jet, paying a little more for the convenience. Disney World isn't cheap, either.

Jolene was a little excited so I took her outside for a while. She picked up trash in honour of Earth Day and demonstrated cartwheels on the grass. We also had a good talk about all sorts of things. 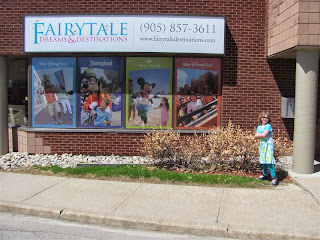 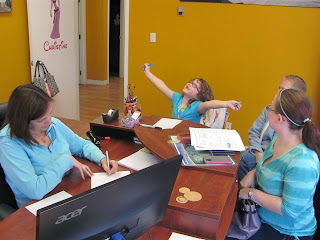 A lot of excitement for a little girl

With the trip planned, we stopped back at McDonald's for lunch and then went our separate ways about 3:00 PM. Sandy and I arrived back in Sudbury about 7:00 PM. 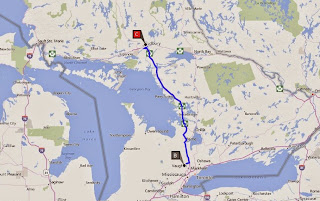 Sudbury Ontario - This Is Not The Way To Texas

Today was the day we were supposed to leave for Texas. If you looked in to see how far we had gotten, you may be surprised to see we are still in Sudbury.

On Good Friday night, we got back from visiting with Kim, Mike and the girls who were visiting for Easter Weekend. Everything looked normal when I parked and I settled into the rec room to watch some TV. After midnight, I heard a strange hum that I traced to the water pipe coming in from the main. No water was flowing into the house but I could feel a vibration in the pipe.

Whatever was causing it wasn't in the house so I went outside to have a look. To my surprise and, if I may say so, horror, the ditch in front of our yard was full of water and it was overflowing into our front yard and onto the street. Figuring I had broken a water pipe, I called the City emergency number and someone arrived within fifteen minutes.

While I was waiting, I saw that at least six peoples' yards were flooding and that drainage through the ditch was blocked by snow two doors down. The City had been cleaning ditches in the subdivision on Thursday but hadn't gotten to our street yet. In fact, I could see the big shovel parked at the playground as the water level rose ever higher.

The City worker took about 45 minutes to shut off both ends of the water main because he had to break through some ice to get to the valves, which are about seven feet down. In this time, the water rose another foot and started to overrun our driveway. When he did get the line shut down, the hum in the house stopped immediately. I figured we were home free, but that was not to be.

We have an outside sump in the garage due to a screw-up in installing weeping tiles by the previous owner. Over five feet deep, it has a submersible pump that takes water that flows in and discharges it to our inside sanitary sewer line. What I did not note was that, as the water flowed into the driveway, it ran down the far side, under the garage door and straight into the sump. When I went to check why I hadn't heard the pump in a while, I found that it was not working and the sump was full of water right to the brim. Bypassing the float switch didn't do anything so I assumed the pump had failed. Later, I found that the water had carried enough silt from our crusher dust driveway into the hole to plug the bottom of the pump solid.

When the water gets to a certain depth in the sump, it starts to flow into the basement. When it is full, it appears that where the pipe goes into the house to the sewer line isn't well sealed and a trickle becomes a flow. On the other side of this wall is what you could loosely call our rec room, complete with a carpeted floor that has been there since we moved in. The water soaked the carpet as it flowed diagonally across the basement to the real sump and then out. Luckily it did not build up any depth, but I spent the night (who can get a sump pump at 2:00 AM?) watching the water flow and the carpet get wetter and wetter.

In the morning, I got a new pump and some water line first thing and dropped the unit into the hole with the line going out to the back yard. It didn't take long for the sump to drain its contents into the duck pond that will become my back yard in a few more weeks when the frost leaves the ground.

A word about the recreation room. It is a curious kludge of wall coverings, floor coverings and ceiling bits that was here when we moved in. Not being too concerned about appearances, I never did much to change that. Sandy and I spend most of our time down here but, as my daughter Kim said, we would probably enhance the value of the house by gutting it and making it a basement again. We have a totally suitable four bedroom bungalow and moving to the main floor would be totally appropriate. Because we don't intend to rebuild the rec room and the current sump configuration is patently against code, I didn't want to deal with the City or put a black mark on my insurance record.

On the plus side, if I hadn't checked the odd noise we would have been under a lot more water by morning. And if we had already been on the road, the ramifications would have been a lot worse. So there was a bright side.

Sandy and I spent the next few days tearing out wet carpet and flooring and hauling it to the dump. We further decided that this would be the kick we needed to start decluttering the house because, some day in the not to far distant future, we will trade home ownership for a nice apartment somewhere. Then, when we go away, we can just lock the door. No grass to mow, snow to shovel or structure to maintain.

Anyhow, the Texas departure date was the 8th. The bike had new tires and was in the trailer. The noise in the truck engine was deemed to be not significant. Everything was on schedule except for the house. But I didn't feel that we would be able to enjoy the trip with that hanging over our head so, after speaking to Sandy, we decided to cancel. I notified Sherm and he was able to take on Lanny as his new room mate.

The cleanup and junk removal is proceeding well, and I expect we will be on our way to SEVROC in Maggie Valley, NC on Mother's Day as planned.
Posted by Jim "Skid" Robinson on 4/08/2015 No comments:

Some people are curious about out travel schedule this season and others actually need to know. So here it is the latest thinking. Most of the trips involve getting to or from Vulcan Riders and Owners Club (VROC) events, hopefully finding some interesting things to see along the way.