Another Memory From Fifty Years Ago

Here is another brief walk down memory lane. I am recording these things so that once my memory has slipped, I can read and remember.

Fifty years ago, May 3 1971, I rode my new Yamaha 350 from my meager apartment in Gatchell to the Inco General Office in Copper Cliff. I proudly walked into the office carrying my helmet like a badge that told the world that I was a little bit different, a man to be reckoned with. I was a biker.

The men in the Pay Office (women were not allowed to work there until 1974) made the appropriate noises but the boss, Bob McInnis, looked at me like I had two heads. It was a pretty conservative place back then.

Mondays and Tuesdays, the Copper Cliff Police Force (company owned) drove us out to TD banks, mines and surface plants to hand out pay cheques. We had over 18,000 hourly rated employees back then and I personally handed cheques to about 4,000 of them a week. I spent Monday morning at the main TD bank branch on Durham Street paying men who worked at the mills, smelter and refineries (Tuesday was mines day). Back in the office, I was scheduled to spend the afternoon at the Iron Ore Recovery Plant, sitting in the Time Office with Timekeeper Hank Harrison and handing out cheques to the workers as they came off shift. Normally, I would be driven over there by Copper Cliff  Police Corporal Lloyd Walford, a jovial, portly man who I could not imagine doing actual police work. This day, I asked Lloyd to take the cheque box and meet me at the plant gate.

I fired up the R5 and, in a cloud of blue two-stroke smoke, pulled out of the parking lot. Now that I had been riding two whole days, I figured I knew what I was doing. I took Power Street and followed it onto company property past the Copper Refinery gate. I crested a mild hill and saw a large patch of gravel at the end of the road to the new Nickel Refinery, which was under construction. Alarmed, I applied the brakes. Or rather, I applied the front brake because I knew that is where most of the braking power came from. Most of the time. Unfortunately, this was long before ABS and the front wheel locked in the gravel, losing the gyroscopic effect that kept the bike upright. Down we went, the bike and I, at about 40 MPH. I slid, it slid, eventually stopping in a crowd of dust.

I will give the old Yammies credit, they were tough. Thankful for my old, used leather motorcycle jacket and gloves, I got up, dusted myself off and picked up the bike. The handlebars were crooked but everything else looked good so I fired it up and rode the last quarter mile to the IORP gate. Lloyd, using his keen police powers of observation, noted that something had happened. I told him I was fine and he suggested I look again. Blood was running out from under my right sleeve and dripping on the ground. Something had punctured my leather jacket and then my skin as the sleeve slid up. I had a gash in my forearm ending just below the elbow.

Hank took the cheque box to the Time Office while I was sent to the adjacent First Aid Room. The attendant cleaned the wound as well as he could (gravel kept coming out of it for a couple of weeks afterwards), applied antiseptic and bandaged it. Then I went back out to do my job. Soon after, I began to feel cold, clammy and faint. Before I fell off the stool, Hank got me back to First Aid where they decided I was in shock and needed to lie down on a cot. Hank handed out cheques until I felt better.

When it was time to leave, I took the meager tools and loosened the bolts on the front end. Then I grabbed the bars, pulled them into the right place and tightened the bolts again before riding home. And that was that.

Until the next day when I walked into the Pay Office and Bob, the Paymaster, said "Here comes Skid". In addition to being Inco's first Workman's Compensation motorcycle accident, I had earned a new nickname. It probably would not have stuck if the incident on May 17th had not happened. More on that later, but fifty years have gone by and Skid still how many people know me.

Fifty years. Wow. Where has the time gone? 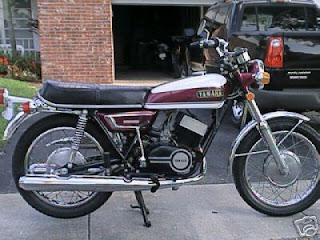 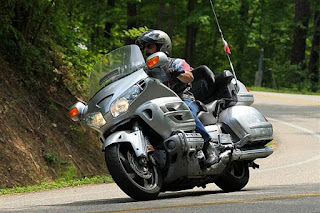