Snowmobiling used to be a big winter activity for me. In the early 90's, 3,000 miles a season was fairly common. Later in the decade, when I was (volunteer) working as the OFSC Provincial STOP Coordinator, I spent most of my free time working away from the trails. As a result, I got out of the habit of riding for fun for a long time.

More recently, the last couple of winters have been less than ideal from a snow standpoint, with 2006/2007 so poor that I never took the sled out once. In addition, I developed a case of tennis elbow the year before that took a long time to heal.

I am now down to one sled. A few years ago, Sandy told me she didn't want to ride any more, so I started playing a little with her little machine, a 1998 Skidoo 440 cc fan cooled MXZ. This is just a little bitty thing compared to most sleds today, but I found I was having a blast on it. Light and nimble, I can throw it through corners very aggressively. The only downside is that it can't keep up on rail beds or lakes because it tops out about 120KPH (75 MPH). In any case, two years ago I sold my larger 1995 Skidoo Formula Z in favour of this little yellow toy.

To ensure that I had a reason to get out and ride this year, I told Norm last spring that I wanted to get reinstated into the STOP program. They had never reinstated anyone before, and had to develop a process that included me retaking the final exam (I passed) and undergoing a complete background check. The background check hasn't been completed yet, so this winter I wasn't sworn in and was unable to write any tickets myself. 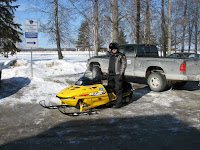 I did get out, though. Worked at least one shift per week from mid January until the week before Easter including a couple of emergency call-outs. The photo is me at about -20C outside the Greater Sudbury Police offices in Azilda, ready to head out on a patrol.

It was great getting out. The police partners here, both OPP and GSPS, are excellent. The public is generally well behaved except for a small minority who are in need of our counsel. Norm and his crew kept the trails in spectacular condition most of the winter.