I met Peter on line as part of the Facebook Senior Motorcyclists group. I had been up to visit him and his lovely wife Eva in their Orangeville home, once alone on the bike and a second time in the car with Sandy. He rides a Yamaha V-Max, quite the potent machine in its day and no slouch even now.

We were gifted with an unexpectedly balmy Sunday this weekend and I asked Pete if he wanted to go for a ride. We agreed to meet at the Grand Valley Home Hardware parking lot at the intersection of Highway 9 and Dufferin County Road 5. I rode up through Belfountain and got there at the appointed time but Peter was already there waiting. 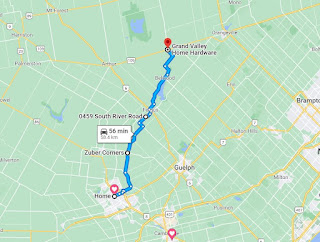 I was new to the area up here but had been scoping out some potentially interesting roads, including a few we explored on our trip up to Sudbury last month. We rode up Dufferin 25 through the small but quaint town of Grand Valley and continued all the way to Highway 89. From there, we went northeast on 17 until we connected with County 124 just south of Horning's Mills. This road was quite straight as it took us straight north, but the turn onto County Road 9 to Creemore led to some much more interesting riding. This stretch is on my A List. When we reached Airport Road at Cashtown Corners, we stopped at a Tim Horton's for a break and some coffee. There was another group of motorcycles there when we arrived and we kept seeing bike after bike passing by on the road. This was not a typical November day and everyone was making the best of it. 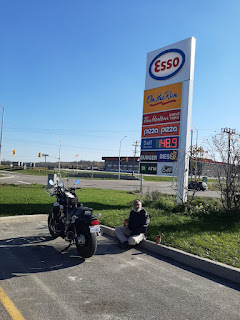 Coffee at Cashtown Corners
From Cashtown, we headed south on Airport Road to Mansfield and got back on County 17, We followed 17 west to Mulmur and then turned south on Prince of Wales Drive. At Highway 89, this turned into Highway 10 on which we continued south towards Orangeville. Before we got there, we turned east on Hockley Road, one of the better motorcycle roads in the area. This took us to the landmark Hockley General Store, which was inundated with riders out for an unexpected last spin. One odd incident occurred when we stopped at the Airport Road crossing. A car pulled up behind us and a rider pulled up next to him, giving the driver a loud piece of his mind. I'm not sure what the person in the car did because we couldn't make out the words but the volume indicated the guy on the motorcycle was not too happy about it. 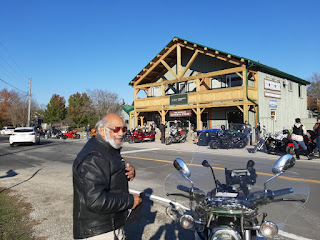 We didn't go into the store at Hockley because it was so crowded. Instead, we returned to Airport Road and took it south to Highway 24 which, in turn, took us southwest to McLaren Road and down to the famous Forks Of The Credit Road. This is a short stretch of winding pavement that ends with a couple of tight uphill hairpin turns before stopping at the crossroads of Belfountain. The only negative to The Forks is that the locals have taken a lot of steps to underscore the restricted speed zone. This includes painting the speed limit on the road surface. But we weren't going very fast because we got behind probably the slowest Corvette driver to ever get behind the wheel.

Belfountain was even more choked with motorcycles than Hockley. We barely found room to pull over and say our goodbyes. It had been a fun 100 miles and we agreed to do it again next year. Then Pete headed north to Orangeville while I rode southwest to Waterloo. 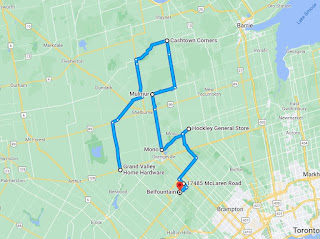 I took Highway 24 to Guelph where I connected with Highway 7 into Kitchener and Waterloo. I did the final ride of the year up Riverbend Drive, a short stretch of road that not many people take which is a good thing because it has a few curves in it as good as anything in the area.

As I parked the bike in the underground garage, I reflected on a good bonus day even as I realized I would probably be pulling the battery out for winter maintenance before I rode outside again. 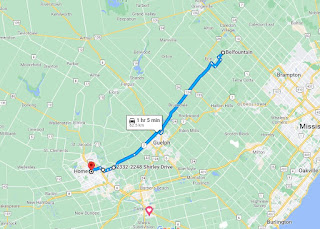