Old Timers Lunch At The Crow's Nest Pub In Newmarket

Forty years ago, there were a number of active motorcycle clubs in and around Ontario that came together to form the Ontario Road Riders Association (ORRA). Then, based on the example set by the York Wings, they began hosting weekend camping rallies. The members supported one another's events for the next twenty plus years, with little villages of the same tents setting up in different times and places throughout the summer. It was a time of rich fellowship where we enjoyed riding, eating, drinking and sitting around bonfires. Clubs and rallies came and went but the major clubs and gatherings in the 80's were:
York Wings - Toronto
Road Bike Olympics
Nickel Riders - Sudbury
Rainbow Rally
Waterloo County Touring Club - Kitchener/Waterloo
Cyclefest
Peterborough Tour Riders - Peterborough
The Price is Right Rally
Ottawa Valley Touring Club - Ottawa
Rally in the Valley
Peacemakers - Rochester NY
Lost Weekend
The five Canadian clubs were at the forefront of ORRA. I was the President of the Nickel Riders at the time and, last summer, I reached out to two of the other presidents from that era that I had not seen in decades. Ralph of the York Wings and Ray of the Peterborough Tour Riders lived fairly close to each other so I arranged for us to have lunch at about the midpoint in Bracebridge. Leo Laframboise accompanied me on the ride to the meet. It was great seeing old friends again and catching up.
This year, Ralph and I decided to do lunch again. On the advice of The Mighty Stonewall, we selected the Crow's Nest Pub in Newmarket. This was roughly half way between us but north of crazy Toronto (or so I thought). Another former York Wing who we have stayed in touch with, Eric, lives just off Highway 9. Since I would be going right by his door, I called him and asked if he wanted to come along. He said sure but I decided we would surprise Ralph.
Sandy had thought about coming but then the weather man said there was a good probability of thunderstorms in the afternoon so she decided to stay home. By this morning, the meteorologists had cancelled the rain predictions but she had already made up her mind. The meeting time was 1:00 PM and I left a little early. Good thing because I found Dufferin 3 on the way to Orangeville had been reduced to gravel. The flagman at one stretch told me they would be starting to spread asphalt next week. I am not a big fan of gravel roads but I stayed loose and rode through it.
I took a detour up through the Hockley Valley because the road has a lot of sweeping curves and is fun to ride. Then I took the Mono Adjala Townline, a dead straight 60 KPH road I had never been on before, straight back south to Highway 9. From there, it was a short hop to Eric's house.
About ten years ago, Eric and Sherri sold their large house in Inverhaugh and bought a small place in a retirement community called Tecumseth Pines. Eric showed me some renovations that they had done since they moved in and I was suitably impressed. It looked like the after shots on one of those reno shows. I have to mention that Eric and Sherri with their GoldWing are some of the few people I know who are still regularly engaging in a long haul riding lifestyle.
Eric and I headed out across Highway 9 with him in the lead. It was a straight run with one right turn just before we got to the pub. Traffic got more dense after we crossed Highway 400 and I was starting to doubt the wisdom of picking Newmarket, but we arrived without incident. Ralph pulled up a few minutes late due to missing a turn. 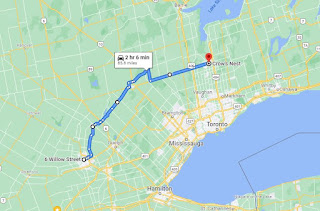 Waterloo to Newmarket - 86 miles
It is good to reconnect with old friends. Eric and Ralph had not seen each other in about three decades and it was like old home week. Plus they both teach college courses now, Eric in accounting and Ralph in law enforcement, so they got to compare teaching note as well. The pub was nice and not crowded, so we were able to take our time and reminisce. After we finished and went outside, we spent more time swapping stories in the parking lot until we had to go. Everyone agreed that we would have to do this again. 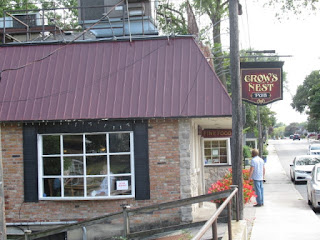 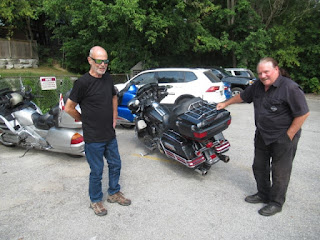 Eric and Ralph - Two Old York Wingers
Eric and I headed out together with me following again. Once we got over the 400, traffic got better but, on a two lane road with little chance to pass, you are limited to your slowest common denominator. When Eric peeled off at his turn, we waved and I kept going. I followed Highway 9 right to Orangeville where I fueled up. Then I tried an alternate route to try and avoid the gravel on CR 3. I did miss most of it. 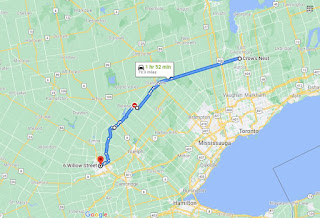 Newmarket to Waterloo
I got home just after 6:00 PM. It was a good riding day, hot but rewarding, and I stayed dry. I need to reach out to a few more folks and do some reconnecting.
Posted by Jim "Skid" Robinson on 8/27/2021 No comments: