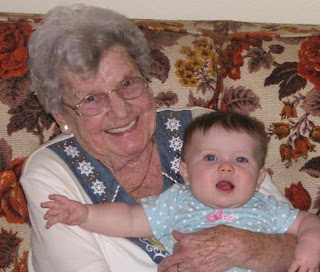 Midge Robinson passed away peacefully January 8th, 2010 at the Sault Ste Marie ARCH Hospice surrounded by family and friends. She had suffered a heart attack and stroke December 14th.

Born in Detroit Michigan in 1924, Midge was raised along with her younger brother Warren (predeceased) in London Ontario by parents Lena Beatrice and James Thomas Woodend (both predeceased). She then trained as a Registered Nurse in Hamilton. After graduation, her spirit of adventure became apparent when she took a posting to the Red Cross Hospital on St. Joseph's Island. From there, she went further into the wild, first working at the Red Cross facility in Hawk Junction and then for the Helen Mine in Wawa.

In the small isolated community of Wawa, Midge developed some lifelong friends and met and married the love of her life, a geologist from Bathurst, New Brunswick named Dale Robinson (predeceased 1969). The couple relocated to northern Quebec where oldest son Jim was born in 1952, and then back to Dale's hometown where they welcomed sons David (1955) and Douglas (1957).

The family moved to Timmins, Ontario in 1958 where Midge became active in many community activities, including part time work with the Victorian Order of Nurses. Following Dale's serious heart attack, they moved to Sault Ste. Marie in 1967. Midge resumed full time nursing at the Plummer Memorial Hospital, first working Emergency and then moving to the Intensive Care Unit where she stayed until retirement.

Following Dale's death in 1969, Midge finished raising the three boys and supporting the family single-handedly. At the hospital, she worked shifts in the challenging ICU and was acknowledged by her peers as a fine nurse with high standards.

Tragedy again struck the family in 1983 when youngest son Doug was lost in a traffic accident but she soldiered on.

In 1985, Midge was forced to take a disability pension, spending her summers at her home on Lasalle Court surrounded by fine, caring neighbors and her winters in Florida. In later, years, she abandoned the snowbird lifestyle but discovered the Internet where she quickly expanded her already large circle of friends.

Right up to the end, Midge lived in her own home and drove her own car, recently passing a road test with flying colours. She will be remembered by all who knew her as a lady who spoke her mind, cared for others and was not above beating a moose calf with a paddle if that was what it took to save the canoe. She was also an Irish witch who was an excellent blackjack player, a voracious reader, an astute political debater and a devoted NASCAR fan.

Her sons Jim (Sandy) of Sudbury and Dave of Edmonton will miss her greatly, as will granddaughters Heather (Tom) of Waterloo and Kim (Mike) of Cambridge and great granddaughter Jolene. Brother Warren's children in Pennsylvania, Jamie, Kathy, Stef, Tracey and Nancy as well as their families, will also fondly remember Aunt Midge.

The family offers many thanks to the neighbors and friends who looked out for her over the years, especially Gale and Les Daniels, Jack and Bridget O'Neill and Angie Ballantyne. Thanks also to Dr. Catania, her physician for many years, as well as Dr. Buehner and the staff in the Palliative Care section of the Plummer Hospital site. Special thanks to the staff and volunteers at the ARCH hospice, who are living proof that angels walk among us.

At Midge's request, she was cremated with no funeral services. The O'Sullivan Donnelly Funeral Home handled arrangements. A committal in the family plot at Greenwood Cemetery where Dale and Doug are already resting will be conducted at a later date.

The family asks that any memorial donations be made to the ARCH Hospice in Sault Ste. Marie so that they may continue their outstanding work.
Posted by Jim "Skid" Robinson on 1/08/2010 1 comment: