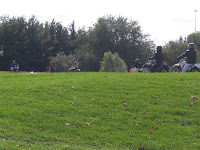 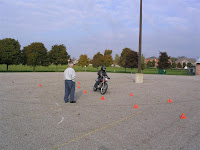 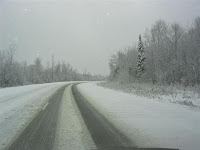 Finally November 4th arrived. We headed south the day before through the conditions you can see in the picture. I was wondering how they could possibly hold anything motorcycle related in the snow, but it stopped around Barrie and the roads were clear the rest of the way. Saturday morning, Heather headed off to Conestoga. Sandy and I dropped over in the afternoon to watch the progress. There were only two students, so they got a lot of close instruction. Finally, they took the test and both passed.
We are very proud of what she did, starting from scratch and working hard. I am also a little afraid that my child is going to be out there riding. Now I know how my Mom and Mother-In-Law have felt all these years.
I suggested to Heather that a small starter bike would probably be the best. That first day in New Dundee, we found out that Fred's friend Ginger was selling her very nice little Honda 250 Rebel, so we agreed to buy it on the spot. I don't expect that she will be on it too long, but it's a good place to start.
Anyway, it was hectic but now we can look forward to riding together next season.
Posted by Jim "Skid" Robinson on 11/04/2006 No comments: