Waterloo Ontario to Sudbury Ontario and Back

It was almost a year ago when we were last in Sudbury. The COVID-19 pandemic was affecting everyone back then and it still was today as we headed back up north for the weekend. The Freedom Riders Motorcycle Association last held a meeting on March 8, 2020 and the Executive decided that things were stable enough that we could do so again. Since I was still officially the Treasurer and we missed our friends, Sandy and I decided to attend.
September was, other than a series of rainstorms, a generally pleasant month. October looks like it might be the same.
Saturday, October 2, 2022
We set out around 9:00 AM Saturday morning under mixed fall skies. The temperature got up to 71. It was interesting to be going north at the start of the weekend with the Toronto traffic. One of the perks of living in the north was always to be traveling counter to the bulk of the traffic on weekends. 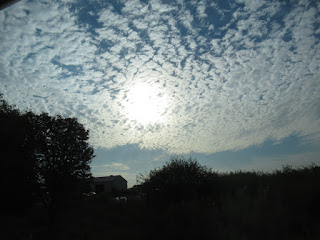 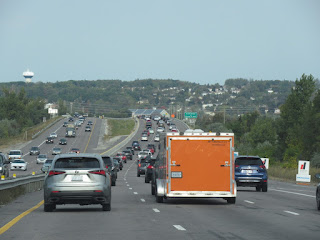 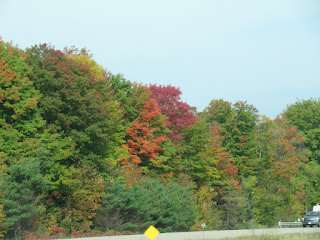 Still lots of green for October
We arrived about 2:00 PM and checked into the Hampton Inn, After taking a drive past the old house and noting some changes, particularly a large wooden fence enclosing the back yard, we met Gary and Cheryl for coffee. These are some of the folks we really miss since moving. On the way back to the Hampton, which is in the south end, we crossed the Bridge of Nations and I noted one of the CP light towers that Phil, at the Waterloo Region Model Railway Club, would like better photos of. I guess I never mentioned that I joined a model railroad club that models the CP Sudbury Division in the mid-70's. 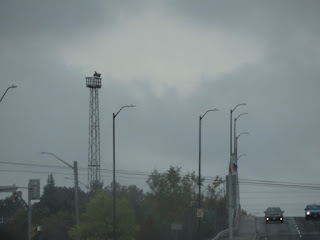 Light tower at the CP Rail Sudbury Yard
Back at the Hampton Inn, there was a bus tour arriving. I can see us traveling like this in the future with accommodations, meals and points of interest looked after and someone else to carry our bags. Europe, maybe, since we have no trouble wandering around Canada and the US on our own.
We joined Leo and Diane for supper to celebrate Di's birthday and then retreated to their place for cake. 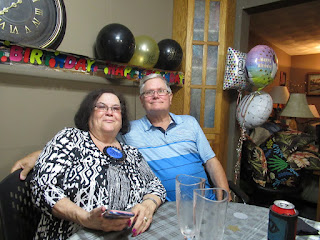 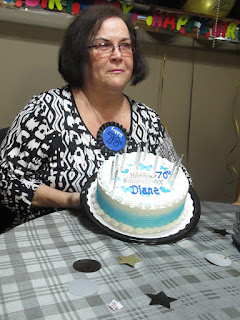 The birthday girl
After supper, we headed back to the hotel and went to bed in the comfort of the luxurious Hampton bedding and pillows that we like so much.
Route from Waterloo to Sudbury on Saturday (274 Equinox miles): 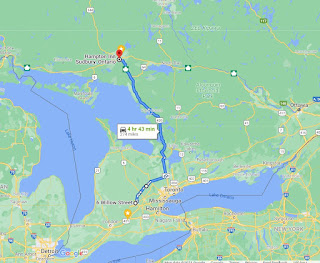 Interactive map
Sunday October 3, 2021
We were up at 7:00 AM and picked up our Hampton full breakfast, although COVID rules required us to take the food back to our room. The Freedom Riders meeting was held in president Rob's garage. Despite moving away a year ago, I was still the club Treasurer, with the help of appointed Assistant Treasurer Carole.
After the meeting, we adjourned to Eddie's Restaurant for lunch with some of the members. Then we spent the afternoon visiting.
Ron and Mary were first. Ron is a retired OPP Staff Sergeant who was my partner running the Snowmobile Trail Officer Patrol when he retired at the end of 1996. Then we worked together at Action Sudbury, where he was the Chair and Chapter 13 of the OPP Veterans Association where he was the President and I was his Secretary/Treasurer for six years. It was good to see them.
Next we visited Blanche, a longtime friend of Sandy's mother and father. We took her a photo album we found in Jan's things of a trip they all took to England together.
Finally, we joined Gary and Cheryl at the St. Louis Bar and grill for supper. Despite all the great choices, I stuck to a hamburger on a lettuce bun with a side salad. My A1C blood glucose levels have been pretty good lately and I'd like that to continue.
We got back to the Hampton about 7:30, watched a little TV and turned in. Because of the rain, I wasn't able to get the tower photos for Phil.
Monday, October 4, 2021
We were up and rolling early on Monday morning. It was good to wait the day and not have to fight all the cottagers trying to squeeze themselves back into the Greater Toronto Area. We did note that the bridge work at the Naiscoot River  between Sudbury and Parry Sound was still going on and the traffic was still limited to one lane serving both directions. 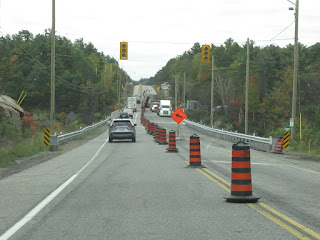 Naiscoot Rover bridge work is never ending
The rest of the trip home was pretty uneventful. We took some back roads across the south of Georgian Bay and discovered some interesting routes that can be explored later.
N.B. Just a note for recording trips in Google Maps. I often have put in the start and end points and then dragged the route to mark our specific roads. Then the map can be saved so it can be shared or embedded. It has just come to my attention that those drag points are not recognized by the Google Maps app on my trusty Android phone so I am going to consciously at via points in the routing going forward. This does not apply to the JPG maps images I include in the blogs, just the interactive map links.
Route from Sudbury to Waterloo on Monday(280 Equinox miles):