The more temperate fall weather the last few years has allowed us to get bolder about extending the riding season. At the October meeting, the Freedom Riders decided that, weather permitting, we would hold our final run, The Colour Run, on Saturday, October 18th.

At the Tim Horton's (Levesque) rendezvous, we pulled in to find Dan & Tracey and Luc and Joanne all bundled up against the cool air. After the posted departure time, we decided that no one else was coming so we headed out Highway 17 East to Verner, where we stopped at the O'Ranch Grill for a late breakfast/early lunch. While there, Dan called our President-elect Rob, who said he was suddenly free and was riding to catch up with us. We lingered over coffee.

Rob caught up with us and we headed south on Highway 64 to Noelville and then Alban. The sun was shining but it was crisp and we soon realized that we were a tad late for any kind of show by the leaves. 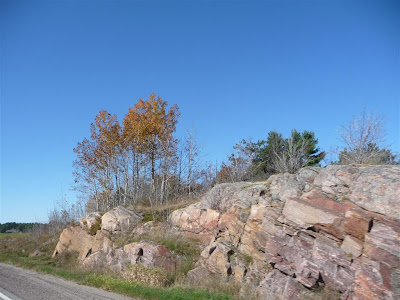 This was one of the few examples of the little bit of colour we saw on the ride
My usual stop, Yvette's in Alban, was closed, another sign of the times. We stopped at the Petro-Can station at the junction of Highways 64 and 69. Surprisingly, they had a good coffee and snack selection, something I'll have to keep in mind for the future. 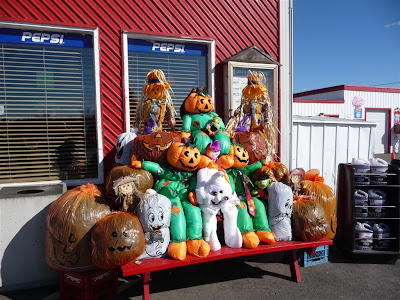 Halloween/Harvest display at the Petro-Can
From Alban, we rode north and I led the group right through to Val Caron where we stopped at (you guessed it) Tim Hortons. I got a group photo of the hardy bunch before we turned and headed back to Sudbury. 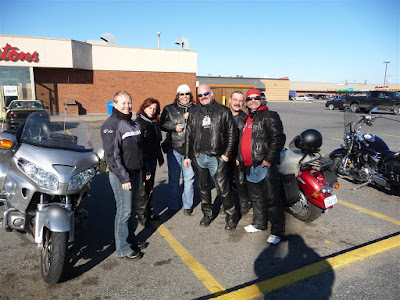 Sandy, Joanne, Tracey, Luc, Rob and Dan
It was a bittersweet ride because another riding season is pretty well done. There may be a few more days but, soon, Old Man Winter will be knocking and we'll be storing the bikes one more time.
Posted by Jim "Skid" Robinson on 10/18/2008 No comments:

Daughter Kim and son-in-law Mike of Cambridge, Ontario decided to take a little trip on (Canadian) Thanksgiving weekend. They are expecting our first grandchild in mid-December and figured they might not get the chance again for a while.

They crossed into Michigan down south and worked their way up the coast of Lake Michigan. Day two saw them visiting my Mom in Sault Ste. Marie. Day three saw them in Sudbury where we got this photo of the happy couple with Sandy's parents, Jan & Harry, in the future great-grandparents back yard. 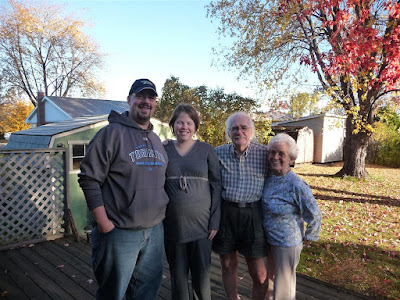 After spending the night with us, the young couple headed homeward down Highway 69.
Posted by Jim "Skid" Robinson on 10/16/2008 No comments: 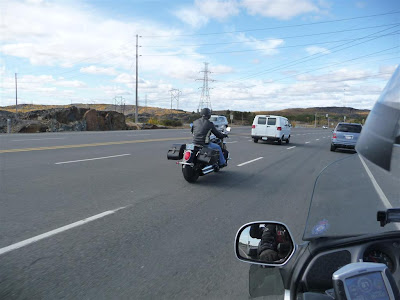 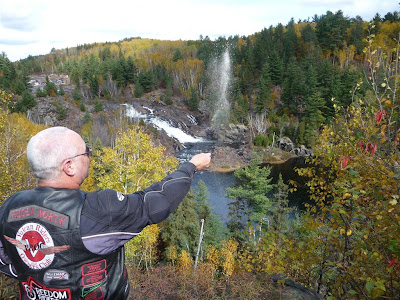 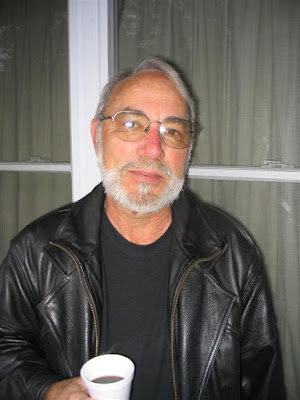 I first started going to out local YMCA back in November, 2001. I hadn't been in a gym since high school. Lack of fitness and the fact that I had tipped the scale at a svelte 223.5 made me decide that something was in order. Under the guidance of Trevor Harris and other trainers, I learned to use the cardio machines and the cable weight machines. Over the course of the winter, I got the weight down to 186 and got myself in the best shape I've been in for years. But then spring came and we started riding. Suddenly, the gym wasn't so important any more. And I started to put some weight on.

Over the ensuing years, I would get into the gym over the winter, although not with the dedication of that first year. And the weight was up around 210. Last year was the worst. I weighed 208 in September, 2007. I didn't get to the gym until late December and, due to eating all the wrong things, I was up to 226 pounds by year-end.

I didn't hit the gym or do much about diet through the first nine months of 2008. The weight was continually over 220 and I didn't feel well at all.

Normally, it takes a while for me to get to the Y. Usually December. But today that will change. Yesterday, I weighed 226.0 pounds and today I started back to the gym. To avoid my usual problem of working too hard, I deliberately started the cardio slowly, but I added more time. Twenty-five minutes on the treadmill, fifteen on the horizontal bike and twenty on the elliptical, making an even hour. We'll leave the strength exercises for a while.

I found that this was the hardest time I have had starting out. As I get older, I realize that I can't be taking these breaks or, one day, I might not be able to get it back. 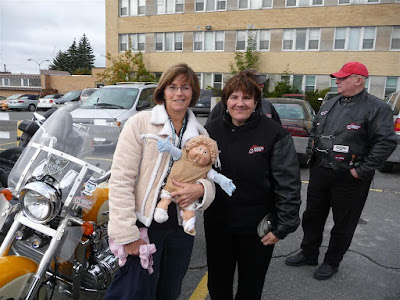 After the presentation, we adjourned to Gonga's Grill for lunch, and a fine lunch it was.
Posted by Jim "Skid" Robinson on 10/03/2008 No comments: