Another trip bites the dust. We had planned to go to North Carolina with some of the Freedom Riders in August after Interlochen. Gary and Dianne, Ray and Mary Ann, Nepper and Yo plus big Don all had reservations at Two Rivers and then all of us except Don planned to head on to the Outer Banks and then up to Williamsburg, Virginia.

Ray had to back out because he planned to head to the 75th Black Hills Motorcycle Classic in Sturgis, South Dakota. Nepper and Yo had other commitments and Gary and Dianne ended up having to look after their granddaughter. We decided to reschedule the expedition until next summer, while Sandy and I will still go to Interlochen (provided I can get the medical insurance).

This has been one big disappointment as far as our travel plans have gone, but I guess it beats some of the alternatives. We are now at the point where we are realizing that time is not endless and we need to get as much traveling done as we can before circumstances arise that force us to stay closer to home.
Posted by Jim "Skid" Robinson on 7/30/2015 No comments:

I resigned my position as Treasurer with the Sudbury Chapter of the MS Society of Canada today while Sandy resigned as a member of the Chapter Board. My position had been taking up more and more time and, when we found things were taking some turns we didn't agree with, we decided it was time to step back.

We'll miss the fine folks on the Board and wish them well.
Posted by Jim "Skid" Robinson on 7/20/2015 No comments:

Sudbury to Noelville Ontario and Back

After only taking the bike out a couple of times since the stent was installed to ride to Cardiac Rehab, I went for a ride today. Kevin, an old friend from the snowmobiling days, brought his bike over to see if I was up to a little spin. I called Leo, who joined us.

I led us out highway 17 and down the newly resurfaced road from Hagar through St. Charles to Noelville. We had lunch in Noelville and then returned via the same route. 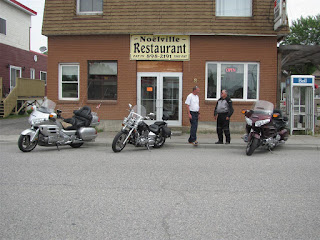 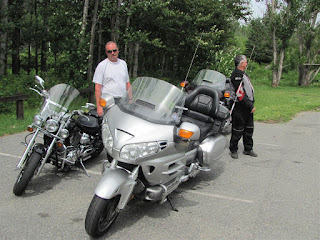 Picnic area along the Veuve River on Highway 17

The trip wasn't that enjoyable because I found I was disoriented while riding, which then triggered anxiety. Of course someone will be anxious if their head spins while riding through curves. I've noticed this before, with the onset corresponding to when I started taking the quit smoking drug Champix (Chantix). I explained that it was like I had a one second delay between my eyes and my brain. Kevin, who had taken the drug before, said he thought it was like looking through someone else's eyes.

That did it. I didn't take my pill at supper time and decided that was the end of it. Six weeks with no smokes, so now I should be able to go the rest of the way without this pharmaceutical crutch. 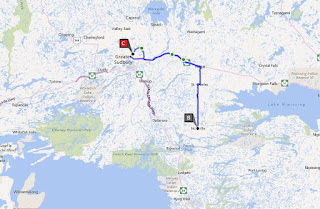