The North American International Motorcycle Supershow was again held the weekend after New Years at the International Centre in Toronto. This used to be the only big TO bike show, but it is now one of two. It is a little rougher around the edges than the December show at the Convention Centre downtown, but it is much larger and more crowded.

Sandy and I trekked south yesterday to Cambridge and moved in with daughter Kim and son-in-law Mike for the weekend. Although we are going to the show with Heather and Tom, they don't have a guest room. The roads were generally good although there was a little bit of greasy snow on the highway between Parry Sound and Barrie.

Heather and Tom arrived from their Waterloo home this morning and we set out for Hogtown in the trusty Caravan. A brisk drive down the 401, up the 410 and across Derry Road put us at the International Centre about 1:00 PM, where we were greeted by the not unexpected "Parking Lot Full" sign. We headed a little ways south on Airport Road to an office lot which had, according to the sign, been made available to show attendees. Someone in an orange vest directed us to a multi-level indoor lot. Pretty snazzy.

It was only about a quarter mile to the International Centre, with a Tim Hortons on the way. We went in through the doors in Building 1 and then had to thread our way to the ticket booth and entrance in Building 3. Inside, we scouted around through aisleways clogged with motorcycling humanity until I cut the three loose and headed for my 2:30 Ontario Road Riders Association meeting in the Vancouver Room. It took a little less than two hours to do our business there. 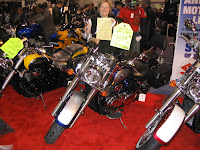 After the meeting, I reconnected with my crew. Tom and Heather had been wandering the various Suzuki dealer booths looking at the C50 Boulevard 800SE prices. This is a nice 800cc liquid cooled shaft driven V twin with windshield and saddlebags. They selected this as their bike at the December show and I figured they were just looking again, but Tom said they were ready to put some money down. After another pass, they got the best deal at Suzuki of Newmarket and put deposits down on two, a blue/silver for Heather and a grey/silver for Tom. The show specials made a huge difference in the prices they paid. In the picture, Heather is standing by the display model. 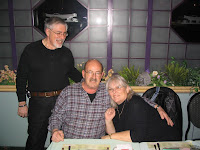 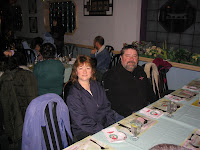 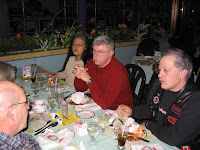 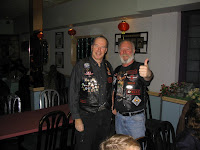 Business done, it was time to head to the Mandarin Restaurant over at Rexdale and Highway 27. This is the 10th year that Guns has organized a show dinner for the original (not those Alberta upstarts) Frozen North Chapter of VROC. We arrived to find Guns, Iris, Maxxx and Marianne waiting. When they escorted us to our seats, new guy Zever and Donna were waiting for us. The top picture features Guns, Zever and Donna and the second has Maxxx and Marianne getting settled. Shortly after, The Mighty Stonewall, accompanied by Roger the Big Grouch from Windsor and Ray and Lisa from Michigan (third picture), rolled in. Lastly, Ace and his lady showed up.
The last photo shows Stonewall and Ace, bosom buddies and the Heroes of Knawbone, in an unusually photogenic shot.

We talked and ate and talked some more. The food was good, the lines were busy and no one was rushing us so we stayed a little later than usual. This is an important break in the winter to get together and both reminisce and plan the next season. Thanks for looking after us again, Glenn. Zever, it was great to put a face to the name and we'll be seeing more of you.

About 10:00, with a light mist following, we headed down the 427 ans across the 401 back to Cambridge. The upgraded GPS maps now know the Canamera Parkway and guided me right into a RIDE sobriety checkpoint. Officer had a sense of humour, I was alcohol free and we were sent on our way. At Kim and Mikes, Heather and Tom grabbed there vehicle and headed out while we turned in as soon as we got in.
Posted by Jim "Skid" Robinson on 1/05/2008 No comments: