First Snowmobile Ride of the Season

My current sled is a 1998 Skidoo MXZ 440. This used to be Sandy's sled but she didn't ride much. Finally, I took it out some and found I enjoyed riding it on the twisty trails more than I did my larger Skidoo Formula Z 583 liquid cooled machine. Eventually, a couple of years ago, I sold the Formula Z. The 440 isn't powerful compared to most other sleds and tops out between 70 and 80 MPH, but it holds its own on any twisty section. I'm getting too old for raw speed anyway.

With the assistance of Charlie Hinds, we had the sled ready to go in mid-December. The battery was tendered all summer. Charlie replaces some idler bearings, installed new graphite sliders and cleaned the carburetor. He struggled to get the new Kimpex Arrow dual runner skis assembled because the Jagged Edge runners Royal Distributing provided aren't the ones Kimpex makes for those skis. But he got it done and was very impressed by the 360 degree turn the sled made in his asphalt driveway.

December has brought more snow than we have seen in years. Christmas Day, I was knocking down snowbanks along my driveway so that the blower would be able to clear them with the snow. Then it started. Rain. Temperatures in the mid-40's F. More rain. Then, as usual, the temperature dropped leaving us with an ice layer. I estimate we lost about 50% of our snow here. To add insult to injury, a little more snow fell afterward.

Tuesday, December 30th, was a clear day. I was doing some work on the computer when Trevor Shamas, a friend from Toronto, called. He was in town and going riding with Vassie Lumley. Vassie is the wife of snowmobiling legend Don Lumley, once chair of the International Snowmobile Congress and International Snowmobiler of the Year. Right now, he's the big guy recovering from hip replacement surgery. Anyway, Trev wanted to know if I wanted to come along. Is a bear Catholic?

I gathered my gear and loaded the sled on my trailer for the five mile trip to the Sudbury Trail Plan yard. Trev was there and unloaded when I pulled in, but I soon had the little yellow machine unloaded and ready to go. In consultation with STP Operations Director Normie Hein, Trevor had a route planned out but we were warned about one detour due to revocation of permission to use the property and cautioned about water hazards.

We rode from Garson up to Skead on good trail. It was a little choppy but there was a layer of fresh powder on it. The new skis worked great but I plan to dial in a little more ski pressure. These are 30 lbs lighter than the stock skis and are easier to steer, so that looks like the right choice for better bite at high speeds.

From Skead, we headed west on the abandoned rail bed towards Capreol. We didn't quite get to the detour because we found the water in one large swamp on the north side of the trail making its way steadily to the south side. Packed ice on the trail was about 18" thick and the water had cut channels through this. We made it across the first one, and Trev and I crossed the second. After taking a moment to pull Vassie out of the hole she was stuck in, we contemplated the third, and worst, hazard. It was sheer on the other side and it looked like a ski could get caught in the undercut. Discretion is the better part of valour and so we turned around and returned to Skead.

Plan B was to head the other way towards the Sportsman's Lodge. Heading east on the same rail bed, we went off the trail system and crossed the Wahnapitae River on the abandoned railway bridge over the Moose Rapids. This is the bridge that tests my fear of heights, since it is over 100 feet above the river and has no guard rails of any kind. I just look ahead and keep going. We reached STP trail 82, which would take us towards Sportsman. Unfortunately, after getting across one wet spot, we came to another overrun, this one more than 50 feet across and of undetermined depth. Once again, discretion took over and we turned around. We returned to Skead and then to Garson.

At the yard, I loaded up and found my trailer lights weren't working. I headed directly home because the sun was getting low and went at the problem with my multi-meter. The problem finally became apparent. The trailer tongue attaches to the axle and bed by one pivot bolt. Everything is so corroded that the ground doesn't make contact between the bed and the tongue. I cleaned up some rust with a file and, bingo, lights again.

I'm going to hurt tomorrow since we didn't slow down a lot on the rough patches. But the sled works and I am looking forward to hitting the trails after a few cold nights. Here's to a great season.
Posted by Jim "Skid" Robinson on 12/30/2008 No comments: 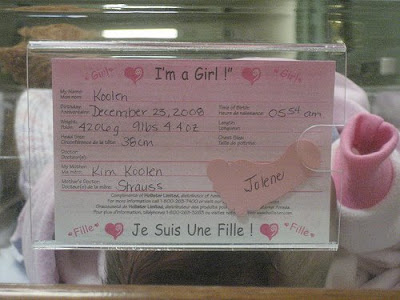 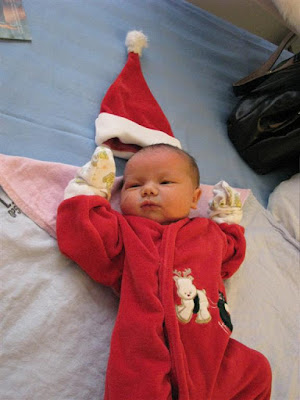 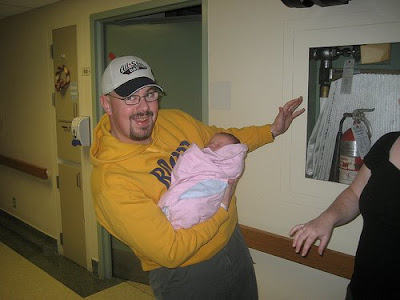 Now we will strive to be good grandparents, spoiling little Jolene before sending her home to mom and dad:-)
Posted by Jim "Skid" Robinson on 12/23/2008 No comments: