Sudbury Ontario to Sault Ste. Marie Michigan and back

Five years ago, Sandy and I subscribed to the NEXUS program. This is part of the Trusted Traveler Program that permits easier passage from country to country. NEXUS is administered by the US Customs and Border Protection and Canadian Border Services Agency. You allow the governments to conduct background checks and take fingerprints to ensure that you have no record and, in return, you get less scrutiny from the border agents (particularly on the US side). At some locations and times, you even get an express lane.

NEXUS cards are good for five years and then you need to apply to have them renewed. Unlike passports, which expire on the date they were issued, NEXUS cards expire on the card-holder's birthday. And ours were now about to expire. I had applied online for both of our renewals and we were tentatively approved, subject to another interview at a NEXUS office. The nearest was in the Soo, 180 miles west of here, and I had made appointments for us today. Sandy was booked for 2:00 PM and I was scheduled for 3:00 but the office told me they would interview us both together. Road trip.

The sky was blue at 7:30 AM but clouds rolled in within the hour. We stopped at mother-in-law Jan's at 8:30 for a cup of coffee before setting out. 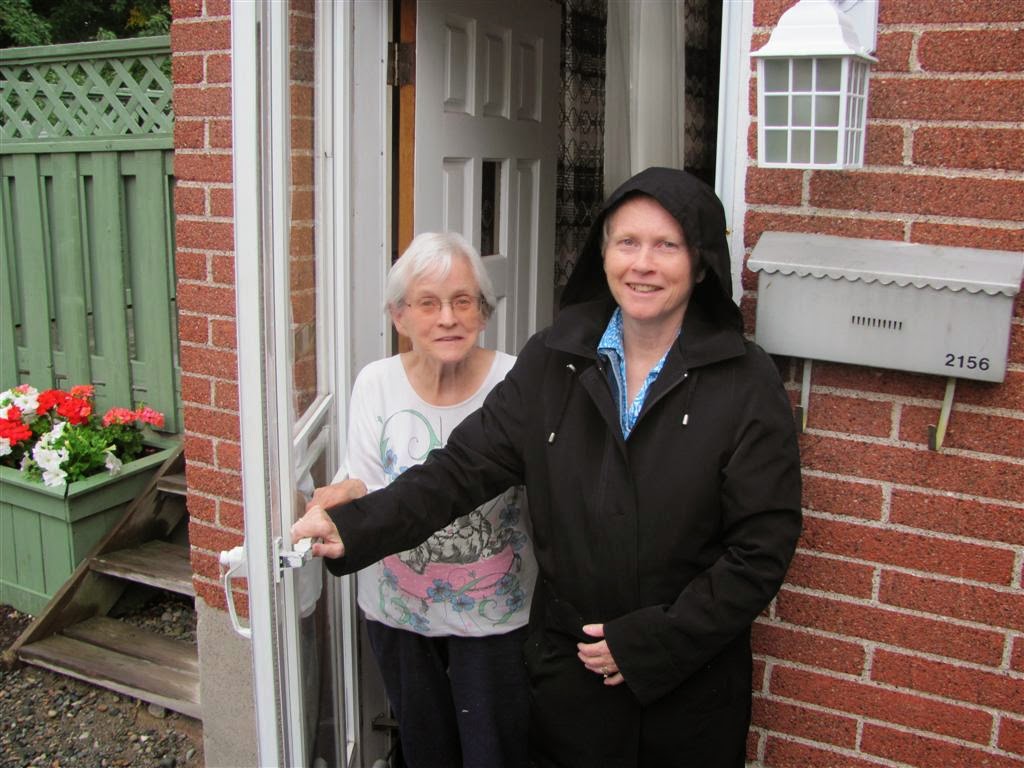 I decided to take the Kia to save gas, although I miss the XM satellite radio when we travel in it. We left at 9:30, stopping to fuel up on the way out of town. Ahead of us at the pump was a couple from Alberta on a GL-1800 towing a trailer. Looking at the ominous skies, I didn't envy them their ride today.

It started to spit on us around the Fairbanks turnoff, and then the rain picked up. By Beaver Lake, it was raining so hard that I was down to 60 KPH and had the four-way flashers on. Cars, and even some trucks, were pulling over but we kept on going. We were clear of the rain by the time we stopped at the Tim's at the Espanola turnoff. Lo and behold, there was the Alberta couple. We talked with them for a bit and found they were happy to have survived the deluge. They were heading home after a tour through Ontario to visit relatives and their goal for today was Wawa. It made me remember the days of traveling on two wheels instead of four.

The Iron Bridge was still one lane, but it was the opposite side from the last time we were here. Past Bruce Mines, they were shaving and paving the highway but we had to stop for two flag persons where they were doing a bit of heavier reconstruction. I reflected on how I picked up the habit of waving to flag persons from my former O.P.P. partner Lynn when we traveled a lot on S.T.O.P. (Snowmobile Trail Officer Patrol) business back in the late 90's. The flag people seem to like it. Then again, what else do they have to do all day?

We stopped at Tim's in the Soo just after 1:00 PM and crossed the border at 1:25. The Soo crossing is prone to being backed up because the bridge is only two lanes. On occasion, we have spent close to an hour to get through customs. Not today, though. We drove right down to the plaza and there were only four cars ahead of us. I told the young lady in the booth that we were here for a NEXUS interview. She asked if we were also going shopping and I said no. "Not even to buy gas?" she asked. OK, cheap gas would be good so I amended my answer. I don't  know why I didn't think of this myself???

We drove around the back of the new US Customs building and parked. In the old building, the interviews were done at the regular counter. Now, they have their own private office manned by one US agent and one Canadian. I announced that Sandy was their 2:00 o'clock and I was their 3:00. The US fellow informed me that we were now both their 1:47 appointment. After a couple of questions, fingerprints and photos and we were done. Sandy had trouble with the fingerprint scanner but they got that sorted out. They told us that we were officially approved and that the cards would be mailed. We should get them within eight to ten days. We were out of their by 2:09. I had no idea what those two were going to do until their next scheduled appointment at 4:00 PM.

We got cheap (OK, relatively cheaper) gas at the Holiday station next to the customs building. There was almost no line-up back into Canada, either. I didn't declare the gas (she only asked if we had gone shopping) and we headed for home after a quick stop at McDonald's for some (almost) nutrition.

The trip back to Sudbury was uneventful. We cruised along at the magic 15 KPH over the limit, the speed at which a) you don't catch up to many people and most don't catch you either, b) is the highest speed for which you won't get demerit points if caught, and c) is not fast enough to attract the attention of the O.P.P. We zipped right through the single lane construction sections. Roads started getting wet around Iron Bridge and it began to spit on us as we went through Blind River. The last 100 miles we experienced rain in varying degrees of intensity as well as some fog. It looked like the weather never got better all day in our part of the province.

We pulled into the driveway safe and sound at 6:15. Mission accomplished. 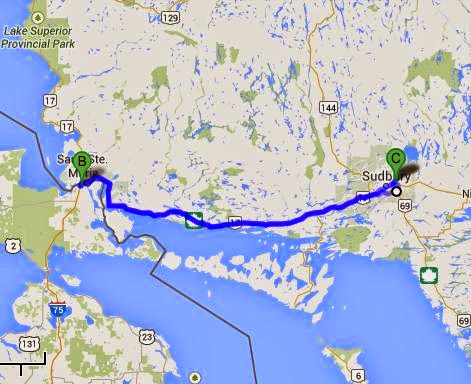