After our ride to Dunnville in July, The Mighty Stonewall (Gord) and I decided we needed to take another ride together. He was unable to join us at the Crow's Nest Pub last week because he was rendering tomatoes for Mrs. Stonewall. Apparently this is an Italian tradition and not punishment for losing two pairs of glasses in a week.
I told Gord to meet me at 11:00 AM the Hockley General Store. This lies at the end of the curvy road through the Hockley Valley, one of the better motorcycle rides this side of Muskoka. To this end, I had checked the oil, adjusted the tire pressures and was ready to roll just before 9:30 AM.
It was not as oppressively hot as it had been recently. It was in the low 20's and my mesh jacket was comfortable, the first time that I had worn it in quite some time. I started up Bridge Street, got stuck in a line of traffic following a street sweeper, made a U-turn and went out on Bloomingdale Road. Lots of options in Waterloo Region.
In Elora, I checked out the Water Street East/South River Road option to avoid downtown Elora. Then I stopped at the Mobil station for fuel before leaving town heading through Belwood. I continued on along the west side of the Grand River until I reached Highway 9. This provided a straight shot into Orangeville.
As I was going around Orangeville on Veteran's Way/Dufferin County 16, I caught up to a pickup truck towing a trailer with graphics of a septic system service company. This guy was slow (paid by the hour?) and there are no passing opportunity on that stretch. When we got to cross Highway 10 and start into Hockley Valley, he was heading the same way. I couldn't see following him through those first perfect curves so I passed him in a short straight in a 50 KPH zone. As soon as I was by, I slowed down. Then I found I was looking at an OPP SUV backed into a driveway and the OPP officer in the SUV was looking back at me. Doing the first thing that came to mind, I nodded and waved. And he didn't follow me. Score one for the good guys.
I arrived at the Hockley General Store at exactly 11:00 AM. Gord wasn't there yet but there were a lot of middle aged and older bicyclists from the Toronto Bicycling Network. Gord arrived soon after and we had a coffee before setting out on our ride. Before we left, he tried to check the wiring to see why his GPS kept cutting out but no solution was readily apparent. 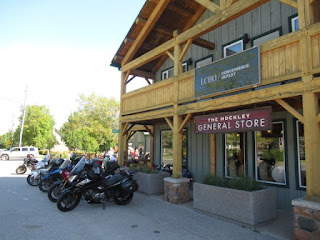 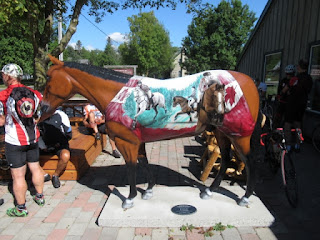 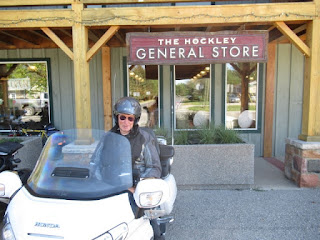 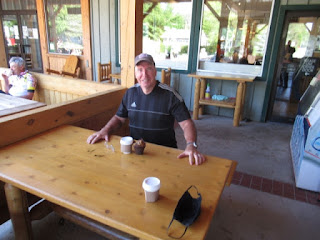 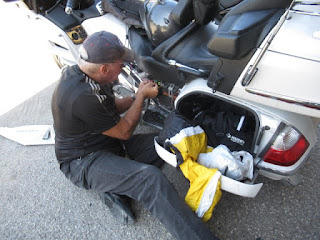 Checking GPS wires
The ride back through Hockley Valley past the Rosebud Motel set was mellow, which was good because we met an unmarked cruiser as well as what was likely the same OPP SUV that had let me by earlier. I do love that road but discretion is the better part of keeping your driving record clean.
Highway 9 was boring but the turn south through Belwood to Elora was fun. After bypassing downtown Elora on South River Road, I took Gord down Middlebrook Road, skirting the back side of the Elora Gorge Conservation Area before proceeding to the Kissing Bridge.
Gord was familiar with the area from taking bus tours through there and stopped at the Mennonite run Last Acre Variety Store for some granola. He swears it is the best he has ever had. He also picked up a bag of oatmeal. I spent the time talking to an older lady from Brampton who was there with her son. Then we went over the bridge and headed on to Conestogo. 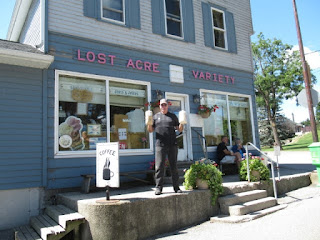 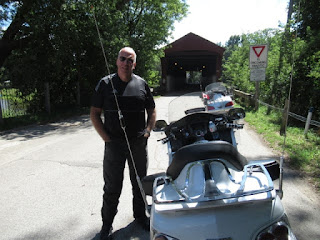 The Kissing Bridge - West Montrose Ontario
The last stretch to Conestogo was on Northfield Road, passing the spot where I was leading a group of VROCers in 2001 (including Gord) when we were cut off by a line of Mennonite buggies that made a sudden left turn across traffic without looking. It was a close call. 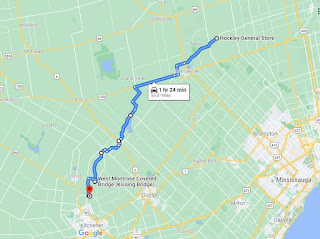 Hockley to Conestogo - 56 miles
The Crowsfoot Smokehaus was not busy and we opted to sit outside due to the pleasant temperatures. Gord had a cider and was surprised when I ordered a black coffee to drink. He thought coffee was just a breakfast mealtime beverage. We both ordered the Smokehaus club sandwich with brisket, bacon and turkey. There was an optional fried egg that Gord thought afterwards that perhaps he should have tried. I had a wedge salad and Gord had mixed baby greens. 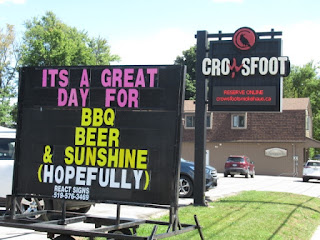 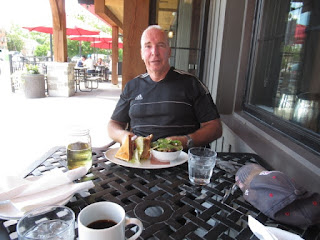 Stonewall ready to chow down 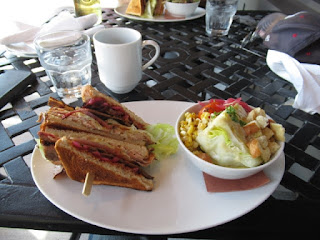 My Smokehaus club (brisket, turkey and bacon) and wedge salad
Before we left, I checked with Gord to make sure he had his glasses. Then we proceeded to the condo via Northfield and University Avenue (past Blackberry and RIM headquarters). I gave him the tour and he got a chance to say hello to Sandy before we moved on.
The rest of the ride was a bit convoluted. It involved some of my favourite roads including Riverbend Drive, Shantz Station Road from St. Charles Street West to Highway 7, Speedsville Rd from Kossuth Road to Maple Grove, Waterloo Road 42 from Blair to Galt and Waterloo Road 75 from Galt to Glen Morris Road. Coming out of Galt, we were following a lady in a black Hyundai when she threw a lit cigarette out her window. Then she proceeded to travel more than 10 KPH under the limit, slowing for some of the nicest curves this side of the universities. There was no passing zone but we didn't let that stop us. This time, no police.
We rode across the Grand River again at Glen Morris and then headed back into Cambridge. After riding up Franklin Boulevard, Gord commented that someone had a thing for roundabouts. There are many but the traffic moves a lot quicker. If you survive. For the final thrill, I took him over Avenue Road past some high priced real estate to Townline Road and up to the Tim Horton's where Justin Bieber probably gets his coffee when he is in town. We went inside while watching a Nomad go through the drive-thru.
Gord will be heading out to British Columbia in a few weeks, where he will be renting a motorcycle to explore the southern part of the province. I look forward to hearing the reports. After finishing the coffee, we rode up to the 401 where he went east and I went west. My route home was quick via 401,8, 7 and 85.

It is hard to believe that it is September already. Where has the summer gone. I hope to get a few more rides in before it is over for another year. I am sure going to miss Eureka Springs.
Posted by Jim "Skid" Robinson on 9/01/2021 No comments: