Here we are at the end of 2015 and I haven't posted anything since we got back from Disney World.

The biggest thing I have been working on was Operation Red Nose, which kicked off Saturday, November 27th. Teams of volunteers  drive holiday party people and their vehicles home safely. It operates Thursday, Friday and Saturday every week until the end of December and then on New Years Eve.

For a few years now, I have been coordinating Red Nose participation by Action Sudbury and the Impact 6/21 Foundation, two local groups whose mandates are to reduce impaired driving. The Freedom Riders Motorcycle Association have supported this in the last few years, but this year wanted to participate under their own banner. And their participation this year was awesome.

I have graduated from a group coordinator to Head Trainer last year and then slowly assumed responsibility for keeping the list of volunteers, scheduling, end of night wind-up and pretty much whatever else President Lesli required. I was on site every night, and got out on the road many of them. This cause inspires the volunteers, both regular and occasional, to go above and beyond so it is easy for me to become more committed.

The OPP Vets Chapter 13 held its annual Christmas gathering on December 3rd at the Copper Cliff Italian Club. We bowled in their downstairs alleys, held a meeting and then had a buffet dinner. I am a member of the OPPVA because of my past time as a Special Constable with the Snowmobile Trail Office Patrol. STOP Officers are welcome and many of the police officers I worked with belong. In fact, I am now the chapter Secretary/Treasurer.

OPPVA 13 also spent two days manning kettles for the Salvation Army, one at a new liquor store and the other at Costco. We do this every year. I am not a believer but I do respect the work that the Sally Ann does and don't mind contributing a few hours to the cause.

It was a funny December. The snow that came at the end of November went away and roads were clear right up until after Christmas. Sam opened Cedar Green Golf Course and people played Christmas Day. Greens fees were a donation to the Sudbury Food Bank. Other people rode their motorcycles on Christmas Day. The snow arrived Boxing Day night while I was handing out Tim Horton's coffee cards on behalf of Operation Red Nose at police sobriety spot checks.

Mike, Kim and the girls came to Sudbury on December 27th. They stayed at TownePlace Suites and we went out to eat at various places. We also took the girls to see The Good Dinosaur, fulfilling a promise we made at Walt Disney World. They headed back south on the 30th. 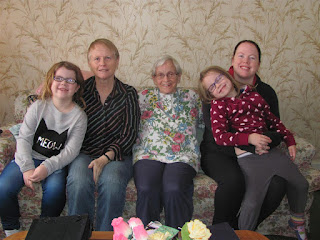 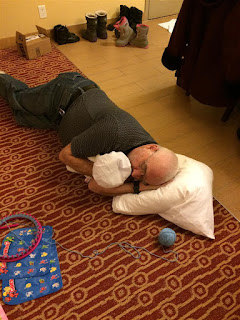 Grandpa Jim worn out in the hotel room

So now we are at New Years Eve, ready to ring in 2016 as we help revelers and their vehicles get home on behalf of Operation Red Nose. This is a hard night to get volunteers and we stay open an extra hour until 4:00 AM. I will be working with Tom and Eve, fellow Freedom Riders and friends from the snowmobile world for almost 30 years. Sandy will be riding along with us. She was already out one night with me on the 19th, the eve of our 35th wedding anniversary.

So to all of you, it has been an eventful year. We enjoyed the things we did and were sorry some things had to be cancelled due for medical reasons. Hopefully, that is behind us for a while. Take care and we'll see you in the morning.
Posted by Jim "Skid" Robinson on 12/31/2015 No comments: