Action Sudbury is a local group of concerned citizens and agencies formed in 1984 by the late Peter Wong to promote sober driving. One of the initiatives is a Red Ribbon campaign through the festive season. Drivers tie the ribbon to their vehicles to let the public know that they support the message. Mothers Against Drunk Driving started this in the 80's in the USA but Action Sudbury was the pioneer in Canada.

The Red Ribbon Campaign is introduced each year with a kick off ceremony held in late November. Politicians, law enforcement representatives, students and the general public gather to hear speakers promoting the message "Drive aware, not impaired". This was the 25th year that Action Sudbury has distributed the Red Ribbons.

I have been a volunteer with Action Sudbury for a few years. Ron Roy, a retired O.P.P. Traffic Staff Sergeant with whom I was partnered in the mid 1990's as Provincial Coordinators of the Snowmobile Trail Officer Patrol, has been the Chair of Action Sudbury for many years. This is my second year as Vice-Chair.

Our keynote speaker was a bit different this year. Instead of having a known figure tell us about the evils of getting behind the wheel after having some drinks, Paul Walker spoke from the perspective of someone who had done just that, resulting in the death of his best friend. After serving his time, he is now sharing his story, grief and guilt with people and imploring them to learn from his experience. His presentation was well received with most acknowledging the courage it took to set himself up as an example of what not to do.

The affair was covered by a variety of local media including the Sudbury Star. As one of the founders of the Snowmobile Trail Officer Patrol and a retired S.T.O.P. Officer, I presented a cheque from Action Sudbury to Senior STOP Officer Special Constable John O'Connor to cover part of the out of pocket expenses by the dedicated volunteers of the Sudbury Unit. 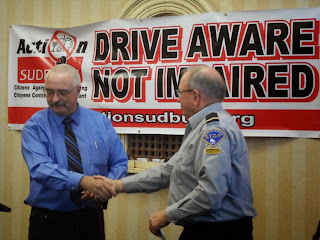 After the speaking was done, sandwiches, muffins, coffee and juice were available for the assembled multitudes. After people left, a few of us took down the displays and packaged up the remaining promotional materials for future events.

December will be a busy month for Action Sudbury.

We, supported by the Freedom Riders, will join other local sober driving groups Impact 621 and Ontario Students Against Impaired Driving (OSAID) in volunteering as drivers and navigators for Operation Red Nose. Formally, we will be participating over two nights but I am scheduled for six including New Years Eve.

Monday, we will join the other groups and three police services to formally kick off the annual Festive RIDE (Reduce Impaired Driving Everywhere) campaign by handing out Red Ribbons and promotional materials on a large RIDE sobriety spot check.

On the 19th I will be handing out ribbons and other materials at an open house conducted by Mme. France Gelinas, the Member of Provincial Parliament for Nickel belt Riding. France has supported us for years by including us as she marks Christmas at her constituency office.

We will be buying thirty second spots on our local CTV station before New Years Eve to promote our Call Me cards. The custom spot will introduce the Action Sudbury Call Me cards as a means of providing those one cares about with another responsible choice if they run out of options. I need to both consult on the production and pay the bills because my fearless leader has deserted winter in favour of Rome and Mexico. I'll see him again when the snow has gone.

On the plus side, this and other volunteer jobs will keep me busy through the winter months.
Posted by Jim "Skid" Robinson on 11/29/2013