Now that we would have the condo on November 1st and had to be out of the house by December 1st, things started to get serious. We had decided that we would not take much of our furniture with us, so it became a race to sell, give away, donate or throw out much of what we had. We also had a massive job going through all the boxes and drawers of "stuff" to decide what would go with us.

We ended up using bankers boxes for a lot of things we decided to take. Sandy did a lot of the work packing them up, a little more every day. We also made a few runs to the Greater Sudbury landfill with junk and to Restore, Value Village and the Pet Thrift Shop with things that still had some miles in them.

Although we did not have the condo yet, Sandy and I decided I should make an advance run to Woodstock. Heather and Tom had kindly agreed to let us store the bike in their garage for the winter so we would take that and as much as we could carry. Anything not bike related could be brought over to the condo after the end of the month.

I hooked up the trailer and loaded the bike for the first time this season. Then we packed all the related bike gear and as many other boxes as we could. Without folding the rear seats down, the back of an Equinox will hold ten banker's boxes plus some flat things and some soft stuff.

Leo (who helped us so much during the move) and I set out early in the morning. We took Highways 69 and the 400 all the way to Highway 401 in Toronto and then followed that west to Woodstock where we arrived just before noon. It did not take long to unload everything and start heading back. On the way, we drove through Waterloo and checked out Waterpark Place. It looked impressive. Unfortunately, I did not take any pictures.

In an attempt to avoid traffic, we headed north on the back roads through Fergus, Orangeville and Stayner. We were back in Sudbury in good time, having covered 633 miles since we had woke up this morning.

Phase One of the move was done. Thank you Leo. 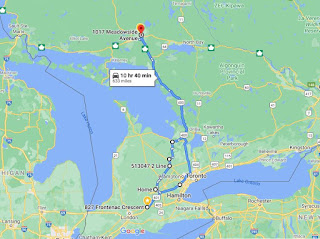