The travel blog has been pretty quiet so far this year. That is obviously because there has been no travel. With the US border closed to non-essential traffic and the pandemic numbers there not looking so good, we have been tied pretty close to our new home in Waterloo.

On the plus side, we are really enjoying this leased condo. It is roomy and the building is nice and well managed. The exercise room and pool were just reopened yesterday as Ontario moved to what they call Level 3.

Level 3 allowed unlimited indoor dining and, since today was Sandy's birthday, the family gathered last evening at the Crowsfoot Smokehaus in Conestogo (just north of the City of Waterloo) to celebrate the occasion. This establishment used to be the Black Forest Inn where Heather and Tom tied the knot in the fall of 2009.

We had not seen an indoor table set for ten people in a very long time. Sandy and I split a three meat plate with brisket, pulled pork and chicken plus a couple of sides. This was followed by sharing Black Forest cake for dessert, a family tradition started by Sandy's father Harry. 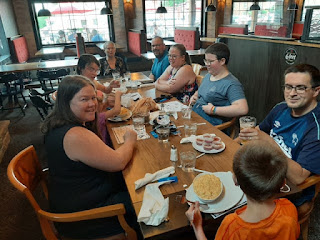 The first full family meal in a long time

It was a great evening celebrating in person together. After we were done, we all took a drive to West Montrose and crossed the Kissing Bridge, a covered bridge that appeared in the most recent film versions of Stephen King's It and It 2. Then we all headed for our respective homes. 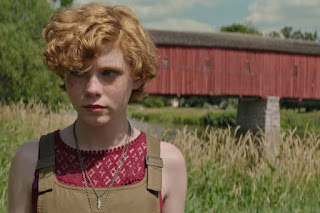 Scene from movie It

After that, Sandy's actual birthday was anti-climactic. We stayed in while she received many congratulations and birthday greetings from friends through her Facebook account.

More often than not since we retired, we have celebrated her birthday on the road somewhere, Usually with friends in places like Lake Topaz, Nevada; Solvang, California; Shelter Cove, California or Richmond, Kentucky. Hopefully, we can get back to out travels while we are still able.

Until then, Happy Birthday to my favourite wife. If I had to be locked down with anyone, you were the best choice possible. I love you to the moon and back