It was clear and cool this morning as we finished packing and loaded up the bike. I am a last minute packer, which drives Sandy nuts, but by the time I start doing things I have planned everything out in my head and it goes quickly. That’s the way it was this time.

We headed out under sunny skies at 42F. Traffic was light and we covered 150 miles before needing a pit stop to get rid of the morning coffee. I was happy to find gas was just over $1.00 per liter after the panic buying on Thursday, but I am also afraid that this will be the price for the foreseeable future. I guess we’ll have to cut down on groceries so we can keep traveling.

With a full tank, we headed south and stopped at a Tim Horton’s in a service center on Highway 400 just north of Toronto. Lunch was a sandwich combo we split and I filled my Butler mug with black coffee. Heading on, I took the easy way and jumped on the 407 Highway, our overpriced, privately owned toll road that took us all the way to Hamilton with very little traffic. The bike was humming nicely as it pulled its way through a stiff headwind.

Before we knew it, we were at Fort Erie where we stopped for more gas before crossing into New York. A fellow at the gas station was checking his windshield where it had been struck by an errant 2x4 that fell off of something. No damage. Better him than us. It turns out we have a common acquaintance, someone who works for my former employer. Small world once again.

The border crossing was quick. No line-up, no request for ID. A couple of basic questions and we were on our way. Again the run to Erie was uneventful, although there were a few NY State Troopers lurking in the medians. I figured that if they didn’t stop the tanker truck doing 85 MPH, I was pretty safe.

We got settled in our room and I called Tom “Scruffy” McCalmont. Tom and I have been trying to get together for several years but he has always been otherwise occupied. We first exchanged Emails when I mentioned on VROC that I saw a Vulcan Classic suspended from the ceiling in the Quaker Steak & Lube Restaurant in Erie. He dropped me a line to say he had bought it. He is now on a Nomad.

Tom and Linda showed up and took Sandy and I out for supper at the same Steak & Lube. Good food and fine company. Can’t do any better than that. Thanks Tom and Linda and I hope we see more of you again soon. Here are Sandy, Tom and Linda in front of the restaurant. 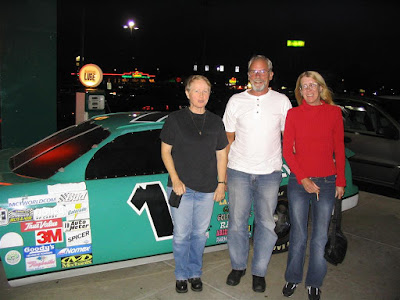 Hurricane Rita must have heard I was planning on going around her through Memphis, because she appears to be hitting Memphis now. The flanking plan is in the dumpster and we will take a close look at the weather patterns tomorrow before deciding how to proceed. Stay tuned because I don’t have a clue where we will be tomorrow night:-)
Posted by Jim "Skid" Robinson on 9/24/2005