We woke up early and visited with some of our fellow HIS residents for a while. Then Sherm, K&P, Sandy and I made the obligatory daily visit to the WalMart Supercenter in Berryville.

From WalMart, we headed back through downtown Eureka Springs and north on 23 until we turned off on a side road to a place called Beaver. We stopped at a General Store that was built in 1901 and visited with a pair of Harley riders from Oklahoma. Continuing on, we rode until we reached Highway 62 where we headed west to the Pea Ridge Battlefield.

Pea Ridge was a critical Civil War battle where 26,000 soldiers met to decide the fate of Kansas and access to the Mississippi River. The Confederate general made a critical mistake on the second day when he boldly moved to attack the Union forces but neglected to bring up his supply wagons. Low on ammunition, they lost the battle and were eventually driven all the way back to the state of Mississippi. With weather threatening from the west, we didn’t take time to drive through the seven mile battlefield but the Visitor Center was very informative and the Ranger filled us in on a lot of details. 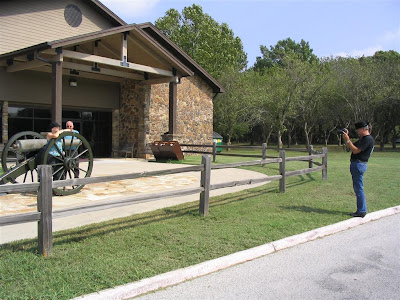 Here is Sherm taking one of his famous pictures in front of the Center.
As mentioned, there was a serious cold front moving in from the northwest, so we headed back down Highway 62 towards ES. The roads here sweep and wind through the Ozarks and the riding was excellent. We stopped to check out Blue Springs but didn’t get past the gift shop since they wanted $7.25 to enter and we felt this was a little steep.

Continuing on, we stopped at the Glass Church, a privately built non-denominational place of worship built with wood and glass and set in a beautiful grove of trees. It was also free. 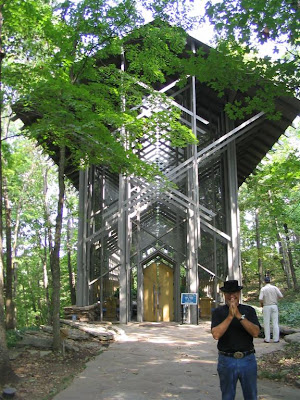 Here’s Sherm in a penitent moment.
We returned to the HIS with Sherm while K&P went back into downtown ES to shop. Sherm sorted his pictures and I wrote yesterday’s Blog entry and then Sherm and I headed back to the AlpenDorf to get on-line and do our updates. As we worked at the picnic table out front, I could see the cold front approaching while thunder rumbled in the distance. Then the lightning started flashing. Finally done, we headed back the four miles towards the HIS as fast as our two plus two wheels would carry us. The rain was starting to spit and severe wind gusts were blowing debris onto the roads. Coincidentally, we caught Karen and Preston who were returning from downtown. Then we passed them and continued on at Warp 9. As we pulled into the HIS, gusts were blowing plastic chairs around and I was hit with an empty beer box. We beat the deluge by no more than thirty seconds.

As a precaution, we moved the bikes under the overhang. 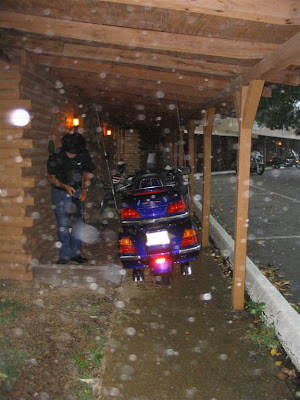 This didn’t matter much since the rain was coming sideways but we figured it would help if we caught hail. Then we stepped back in the room and watched a mini storm surge as the water rose to within an inch of flooding the room. 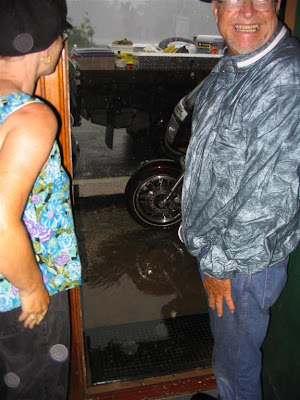 Fortunately, the violent storm was brief and we were able to adjourn to the deck while a light rain fell and then abated.

We ate in the HIS restaurant with Six Pack Jack Ward and his riding companion Randy from Savannah, Georgia. They rode to ES via Kansas City so the could qualify for an Iron Butt Bun Burner certification. This involved riding 1,500 miles in 36 hours. Jack shows up many different places and is one of the serious trans-continental VROC members.

After supper, I took the computer to the deck to catch up on the newsgroup messages I had downloaded earlier. There were a number of friends there and we discussed things, swapped stories and met new people until about 10:00 PM when I decided to head for bed. Sandy was already in the room where she had been catching up on the Wednesday TV programs.

Anyone reading this Blog might wish to check out Sherm’s pictorial account of what we’ve been up to. You can find it at http://estrippart3.blogspot.com/ .
Posted by Jim "Skid" Robinson on 9/28/2005