The original plan for this Thanksgiving Weekend was that Kim and Mike would bring the grandkids up for a visit. We suggested that, rather than have them pack up and travel north with two girls under four years old, it might be easier if we came down for the weekend. They agreed. We will stay at Heather and Tom's in Woodstock and travel to Cambridge to visit.

Before we left, I took care of a couple of chores. First, I called Proline Trailers in New Hampshire to order more aluminum blocks that secure the Condor chocks to the floor. Anyone who saw the process of removing the blocks from one channel to slide them into another when switching from single bike mode to double will remember it wasn't the easiest job. With the new blocks, I can leave a set in each channel so that moving the chock will be much easier.

The second task involved calling Turf King about our lawn. We haven't had a lawn service since 2007, about the time parts of the front and back yard were re-sodded. The sodded areas were good until this year, when they suddenly started sprouting gigantic weeds including dandelions, plantains and some things I have never seen before. Turf King provides aeration, fertilizing, insect control and weed treatments throughout the season, including an optional in-depth weed treatment. Owner Rob will call me Tuesday about coming by to do an inspection and plan a strategy. 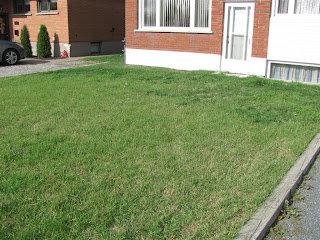 The problem area is nearest the house 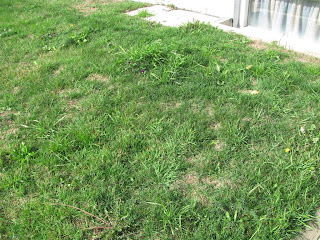 We finally hit the road about 11:30 AM. After a quick stop at McDonald's for lunch to-go, we headed south, although we spent the first five miles out of town trying to get through a slug of vehicles whose drivers seemed to have left their brains at home.

North of the French River and also south of Pointe Au Baril, the road workers have blocked off the passing lanes. Most inconvenient.  On the northern part, they are ready to blast some of the bedrock while further south, Miller Paving is resurfacing some of the existing road. We got held up near the Parry Sound Industrial Park for fifteen minutes while a steady stream of northbound vehicles just kept rolling. It didn't help them much because once we got going, the stopped northbound line was still over five miles long. 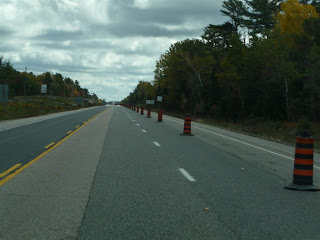 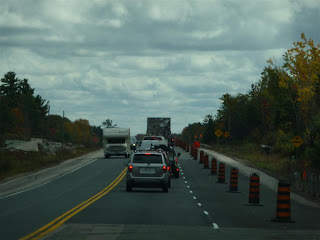 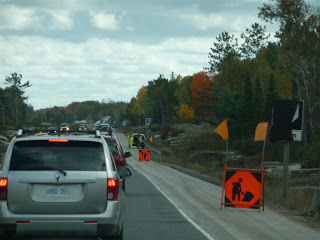 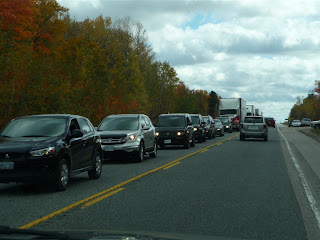 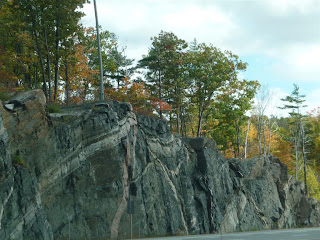 I experienced something new in the Avalanche as we were rolling down the slab. I was moving at 120 KPH (75 MPH) when ripples in the road surface appeared to be causing a shudder. We never noticed this on the long trip but then we were towing the trailer and never saw 75 MPH. It didn't do this when we got it and I suspected either the new tires were out of balance or the tire pressures were too high (considering the door plate pressure was for 7,000 lbs GVWR and we were under 6,000). Later on, I did some research and found this is not unknown and may be due to the front suspension resting on the bump stop on one side. When the rain stops tomorrow, I will take a look.

We stopped at Tim's south of Parry Sound for a potty break and then kept on right through Barrie. On the south side, we got off on what used to be Highway 88 and went through Bond Head to catch CR 1. This took us through the Hockley Valley to Orangeville, where we took CR 3 to Fergus and then down and across 86 to Elmira. From here, I let the GPS find us back roads and I wasn't exactly sure where we were most of the time.

The Mennonite influence continues to be evident here as we passed numerous horse and buggies, farmers working fields with horse drawn plows and even some progressive Mennonites in a plain Grand Caravan. They have been inconvenienced at West Montrose where the covered bridge they prefer to use has been closed due to a cracked crossbeam, probably due to vehicles over the 3 tonne limit crossing the structure. 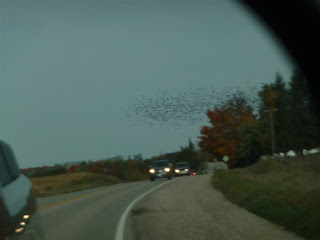 Large flock of birds behind us 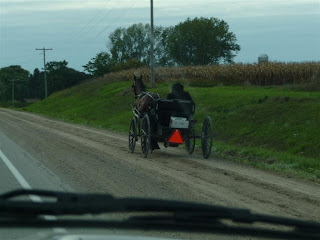 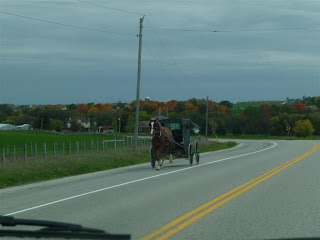 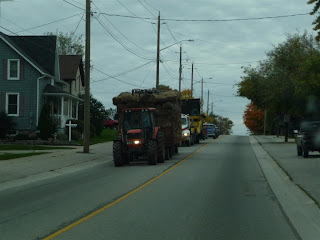 Bringing in the hay 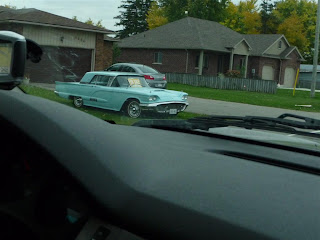 We arrived at Heather and Tom's at 6:05. The kids made supper while I sorted photos (please see the next post for some very nice coloured trees Sandy recorded from the passenger seat). I found a problem with Google Maps because it suddenly does NOT believe that one can get from Sudbury to Parry Sound on Highway 69. I found that this glitch has also imposed itself on previous dynamic maps. From now on, I guess I will reduce the maps to Jpeg's to prevent retroactive unintended revisions. Too bad, because the interactive nature of the maps will be lost. I did send Google a note regarding the glitch but am not holding my breath for a fix. This flaw has only appeared since last weekend.

While I was blogging, Sandy and our hosts were watching TV. Before too long, I got done and decided to turn in.