Our friend Kevin bought himself a new (to him) motorcycle from a friend of his. It was a 2005 Honda GoldWing, the best year for the GL1800 in my most humble opinion. The only problem was that the bike was in Gananoque, Ontario (near where Lake Ontario flows out into the St. Lawrence River). I figured the Equinox/trailer combination needed a checkout run before we started traveling, so a road trip would kill two birds with one stone.

The temperature was right on the freezing mark as we left Sudbury at 6:25 AM. There are many ways to get to Gananoque but none of them resemble a straight line. Oddly, Google Maps tells us that the fastest way is also the longest. I decided to make a big circle.

We headed south on Highway 69, stopping at the Petro-Canada station south of Parry Sound for fuel From there, we took Old Highway 69 and then 169 through Bala and Gravenhurst; Highway 11 south to Washago; more 169 to Highway 12 through Brechin; and Highway 7 east to Peterborough. After a stop at a coffee place at Fowler's Corners, we went south on 28 to the 401 and then east on the big road to Gananoque, where we arrived at 2:15.

The only notable things were a one lane bridge in Bala and a nightmare melange of trucks in an On Route service centre near Trenton (once in the truck parking lot, we almost couldn't get out). In Gananoque, we fueled and upped the trailer tire pressures to 50 PSI. 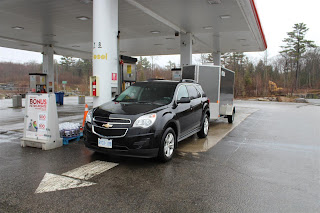 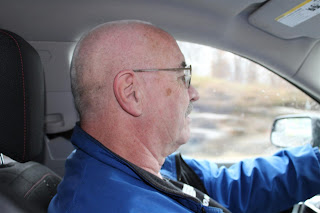 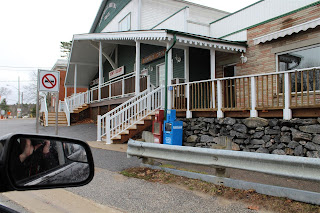 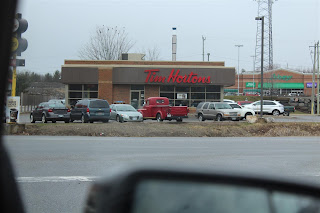 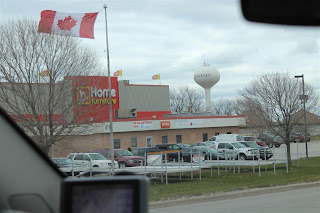 We headed to the appointed address but Bob, the soon to be former Wing owner, texted and said he wouldn't be able to arrive until almost 3:00. Not wanting to waste time, we hopped over to the downtown Subway for a quick lunch. 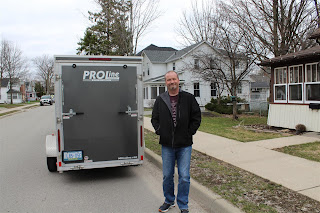 Kevin on Brock Street, Gananoque but no Bob

Back at the house, Bob had the bike out and warming up. It was white, a colour favoured by various friends of mine from time to time. I prefer the 2005 because it was the first year without frame re-welds and the last year before you needed all the optional packages to get ABS brakes. It was also a Darkside bike, meaning it had a car tire mounted on the rear rim. Bob said it had the master cylinder recall done last year but that they would not test ride it due to the rear tire. Darkside is a raging debate in the motorcycle community, but I know more than a few who run car tires and absolutely none where it has caused a problem. Still, liability issues frighten many business owners.

I rode the bike into the trailer, tied it down and we got underway about 3:40 PM. 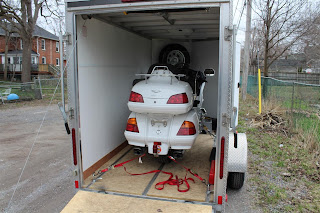 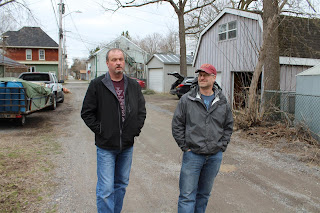 On the way out of town, we noted that gas at the Ultramar station downtown was $1.066 per liter, compared to $1.216 when we left Sudbury. There is something simply unfair about this, which reminded me that nobody promised me fair when I was born.

To complete the circle, we headed north to Highway 15, which took us north through Smiths Falls and on up 29 to Arnprior where we stopped at Tim's. Then it was straight home on Highway 17 with a final gas stop in Deep River. High water was evident until we got past the dam at Rolphton. 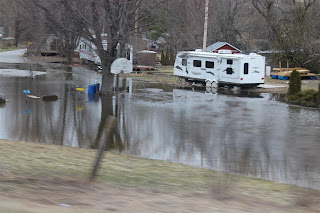 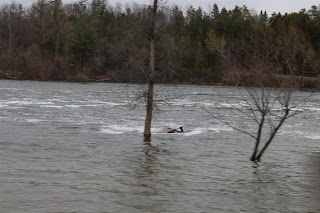 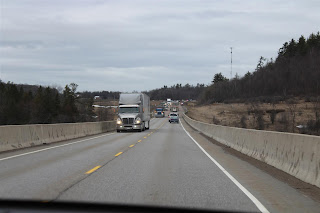 Slowed by a wreck near Renfrew 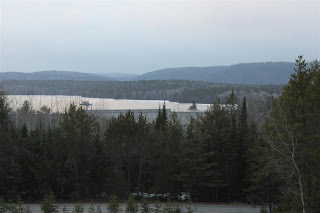 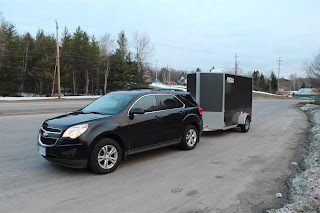 I think it's a good looking outfit

We arrived back in Sudbury about 11:00 pm. I left the trailer at Kevin's with the bike in it so he could haul it over to a bike shop tomorrow for a mechanical fitness inspection (necessary in Ontario to transfer ownership). NB - It seems shops will not pass a motorcycle with a car tire mounted. We covered 734 miles in a little over 16 hours and I did not experience any of my usual fatigue attacks. This was probably due to my passenger, who conversed the whole way instead of napping:-))

I better think about getting our own bike out soon. Tempus fugit. 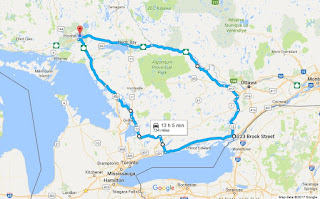 You were near where we vacationed last year, in the Thousand Islands regions, but on the opposite side of the St. Lawrence River.

Nice little circular trip. Nicer on the bike though.