We were up at the correct time this morning thanks to the adjusted clock. Clocks are like people and can only do their jobs correctly if they are instructed properly.

It was only 55F this morning. I had more sausages and scrambled eggs in the hotel breakfast room while I watched Sandy eat more Raisin Bran. I normally would not have chosen the cereal, but it's amazing how good something starts to look when you aren't allowed to have it. Oddly, I feel the same way about Emilia Clarke:-))

We stopped by to see Heather, Tom and the munchkins before leaving town. Then, it was a short drive to Cambridge where we arrived just after 9:00 AM.

Other than incidentally sitting through the CMA Sunday gathering at the Freedom Rally, I can't remember the last time I attended a worship service. I didn't mention this to any of the fine members of the Cambridge Community Church that I met this morning. They seemed to be good folks with a strong sense of fellowship and the facilities to encourage children to attend. Kim, Mike, Jolene and Robyn have been going there for a while.

We were back at the house about 12:30 and packed to go just after 1:00. For the next week, Mike and Kim have rented the same house on Long Lake that they had a couple of years ago. Before leaving town, Sandy and I stopped at Tim's where I got a Chicken Bacon Ranch Wrap to go because eating chili while driving didn't seem like a good idea. Mike stopped at the LCBO and then they went through the slowest line imaginable at the A&W. Before we hit the road, Kim climbed in with us and we were finally rolling by 1:45.

Traffic was better than I thought. We followed Mike in on the 401 and splurged to avoid the worst traffic by taking the ETR407 Toll Road around the north of The Big Smoke. Then it was north on Highway 400. Kim and I talked about everything  under the sun, but politics and religion seemed to be the dominant themes. The trip flew by and I didn't feel drowsy for a moment, exactly the same way that doesn't happen when Sandy is asleep in the right seat. 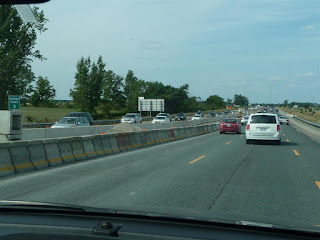 Southbound traffic is starting to build on Highway 400 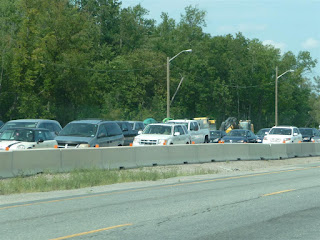 Near Barrie, it stopped in some places 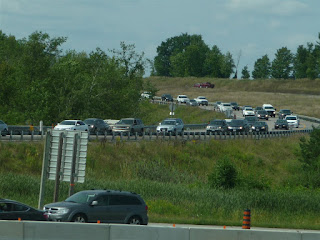 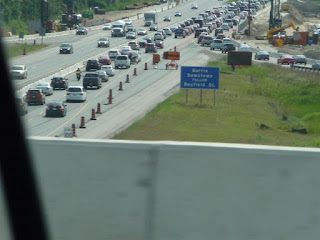 Looking south, a good place for a construction zone

We took one bathroom break at the Tim's at Horseshoe Lake Road and then, before we knew it, we were in Sudbury. Kim switched back to the Caravan and we waved goodbye for the moment. Sandy and I pulled into our driveway before 6:30 PM. 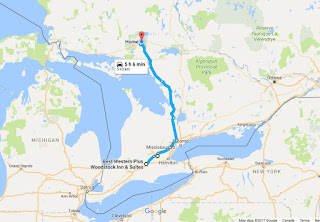