Around 1918, James Thomas Woodend emigrated from Northern Ireland. In London, Ontario, he met Lena Beatrice Guest, a descendant of Irish people who had arrived in Canada a century earlier. They moved to Detroit, Michigan where my mother Mildred Eileen Woodend was born in 1924. Her younger brother, James Warren Woodend, was born in Rochester, Michigan two years later. Then the family moved back to London where the children, both natural born US citizens, were raised with many Canadian Guest relatives.

Mom stayed in Canada, married a Maritimer and had three Canadian sons. In 1975, she discovered that, due to a quirk of fate and legislation, she was still a US citizen. My brother Dave sponsored her and she officially joined the Great White North after many years of paying taxes, voting and serving on juries illegally. My Uncle Warren (known as Jim outside the family) joined the US Army at the end of WW II and served in Germany. He then married a Canadian girl, my Aunt Bet, and settled in the USA where they had five children.

I told you all this to explain how I have American cousins in the York, Pennsylvania who I have not seen in way too long. That was something we were going to rectify today.

Before we could get to York, we had to leave the Outer Banks. It was hard to believe that our week was over and another bucket list line had been crossed off. The OBX were everything I had hoped for and more, and sharing it with Linda and Billy Bob made it all the more special. Thanks to Denise and Nic for putting it all together, and the great circle of family and friends they enjoy.

We had loaded all but the overnight bags in the car last night. The alarm went off at 5:00 AM and we hit the deck running, but Linda and Billie Bob had beaten us to the punch. They were already gone by the time we reached our car at 5:20.

It was pitch black as we wound our way south and then turned west on Highway 12. It was difficult to clean the windshield due to the salt, but it wasn't a real issue while the traffic was light. We stopped at a little McDonald's, part of a Shell station, where they had no McMuffins. It was strictly a McBiscuit or McGriddle morning. We encountered another couple in a Jeep, a vehicle very much part of the beach/dune culture down here.

We crossed the Virginia Line at 6:50 AM and headed for the Chesapeake Bay Bridge/Tunnel, stopping for fuel in Virginia Beach. The BP station was right across the road from the station we had stopped at with Sherm, Southern Draw and Charm and Phillip back in 2102. Then we started out over the 23 mile water crossing, interspersed by two places where the highway went underwater through tunnels designed to let larger ships (like the USN aircraft carriers) enter the bay. 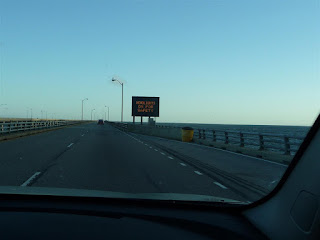 There was no oncoming traffic 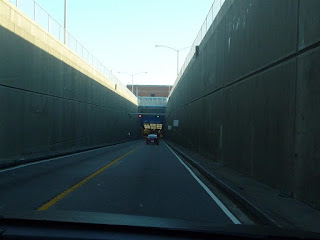 And then we go down 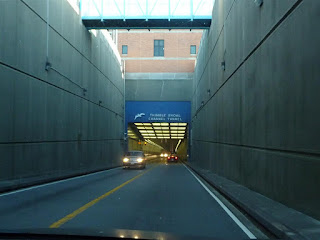 It is kind of a spooky feeling 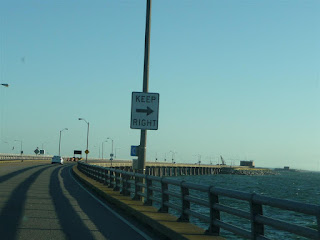 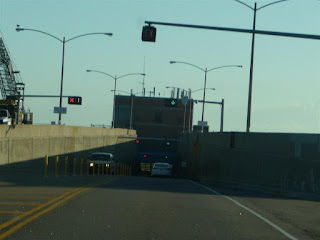 And down we go again 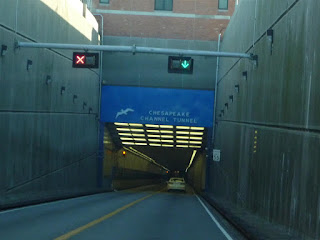 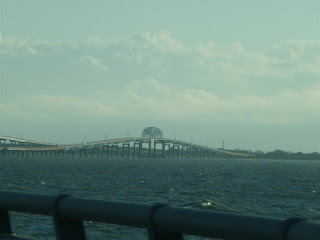 And then a raised span for smaller boats 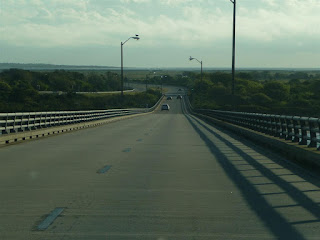 And, at last, dry land 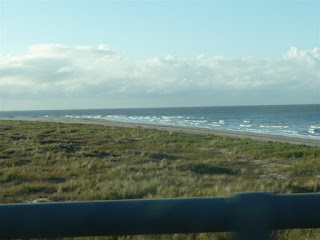 The bridge dropped us down onto the Delmarva Peninsula. The name is a combination of Delaware, Maryland and Virginia, the three states which occupy this narrow piece of land that separates the Atlantic Ocean from Chesapeake Bay. As we headed north on US 13, I resolved to reread some Michener.

We crossed from Virginia into Maryland and then into Delaware. We saw some interesting vehicles and sights, and passed by Dover International Speedway, also known as The Monster Mile, just about the time the NASCAR Cup cars were getting ready to roll. 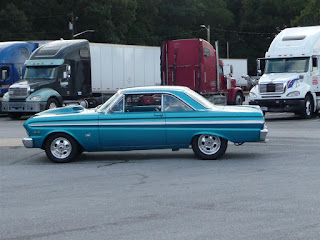 Seen at a Maryland truck stop 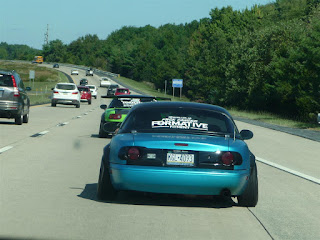 Don't know what this was, but look at the camber 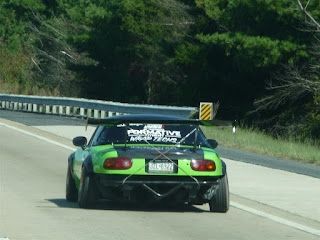 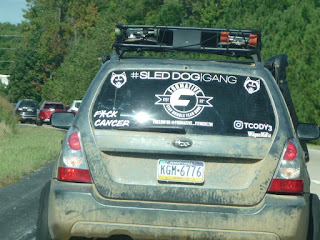 This was also part of the procession 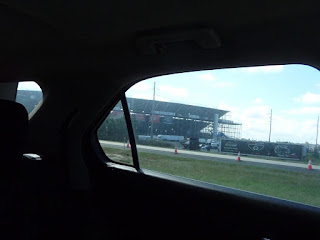 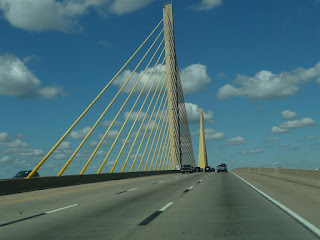 Crossing the Chesapeake and Delaware Canal 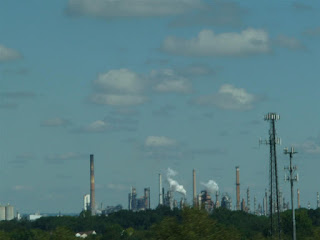 After a stop at McDonald's for lunch to go, we got on I-95 South, which was actually heading west at this point. We crossed back into Maryland and then exited on State 272, which took us north to Pennsylvania. Once we were in the rolling farm country of the Keystone State, I felt myself relax.

The GPS took us through the rolling farmland and a few small towns, passing some Amish buggies along the way. Eventually, we arrived in York. 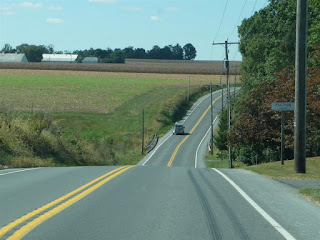 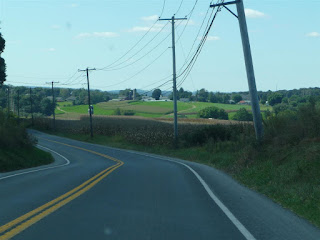 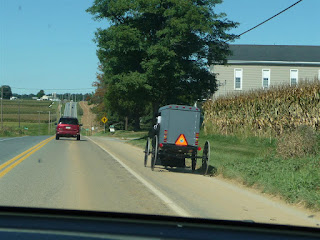 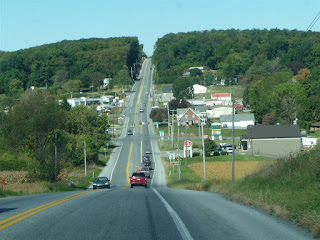 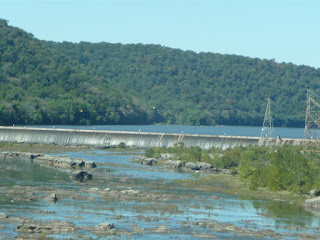 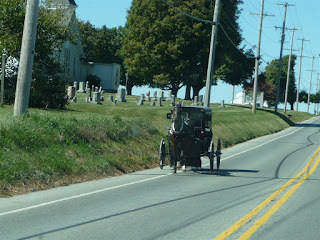 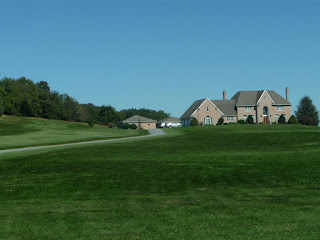 I had made a reservation at the Wyndham Garden York. It was a fairly upscale place but I used a Wyndham Rewards Go Fast and traded 3,000 points for a substantial reduction in rate. As we were checking in about 2:10, we saw what appeared to be a convention crowd gathering. Pennsylvania Corrections Officers. Our room was on the back side and was very nice.

I called my cousin-in-law John and he, cousin Tracey, their son Austin and his daughter came over to our room. It's been almost twenty years (green Nomad days) since we stopped to visit. Austin was just a little shaver then, but Tracey has hardly changed at all.

The family planned to meet at the Round The Clock Diner. We followed John over there and were joined by cousins Cathy, Stef & Geary, Nancy & Jeremy plus kids.. Cousin Jamie wasn't able to make it but the rest of us had a great time catching up. After supper, we went over to Nancy's house for a while. The cousins thought that I look just like Jamie. 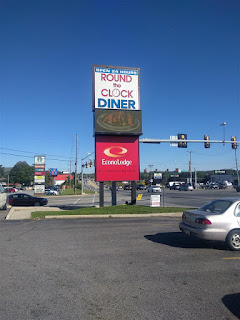 A nice place for a casual family supper/reunion 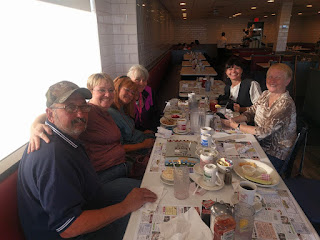 It was around 9:00 PM when we decided to call it a night because we had a long day tomorrow. I kick myself for letting it go this long but resolve to visit family more often in the future. After saying our goodbyes, we followed a convoluted GPS route back to the hotel and turned in. 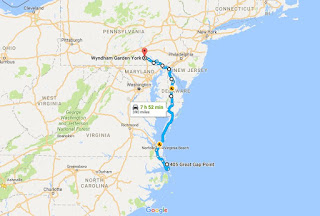