We have reached our final day here on the Outer Banks of North Carolina. After years on the bucket list and a failed attempt to get here in 2015, we have now had the pleasure of the OBX experience. Thanks to Linda and Bob for inviting us and showing us around and a special thanks to Denise and Nic for organizing the whole shebang. 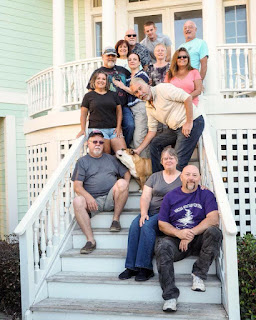 We didn't have any big plans for the final day. The main breakfast was chorizo eggs and the rest of the soft tortillas. Sandy and her acid reflux wouldn't touch it with a ten foot pole, but I found it quite tasty with just a little zest. She had cereal.

This blog continued to occupy my attention. It has become almost like an addiction, the same way I doggedly process my bills and receipts, only more time consuming. After breakfast, I went through several cups of coffee while I got caught up to the end of yesterday.

When I got done the blog, I drafted an article about the latest SEVROC for the folks at Kawasaki USA, fulfilling a  promise I made to Jax in the spring. Then I forwarded it to Linda, who was going to add suitable photos. This was not a new field of moto-journalism. Sherm wrote about SEVROC 2010, Teri Conrad wrote about SEVROC 2011, I wrote about SEVROC 2013 and Jax wrote about SEVROC 2014. You might think they were SEVROC'ed out, but if this can entice people to attend the celebration of the 20th year of VROC in the South East in 2018, it will have been worth the effort. 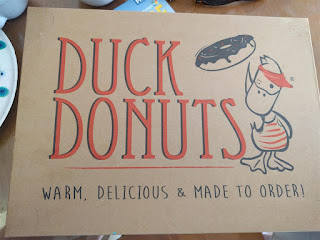 Nancy brought some donuts from Duck 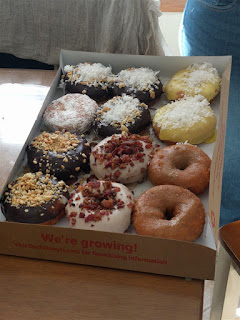 They tasted amazing - must be a secret ingredient
(yes, that IS bacon on two of them)

Some ladies from Maryland on the ferry to Ocracoke raved about a restaurant in Nags Head called Sam and Omie's. They said it was right across from Jennette's Pier and had the absolute best seafood in the whole OBX. The place came up again in conversation today and Eric said it was an experience we should not miss so we decided we wouldn't. Bob, Linda, Sandy and I agreed to meet Denise, Nic and some others there about 4:00 PM.

The four of us left early and stopped in Duck where we walked along the boardwalk and looked at the shops. 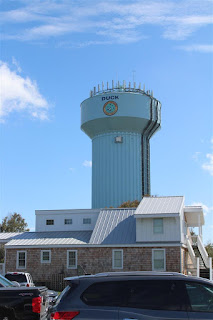 This is a picturesque place 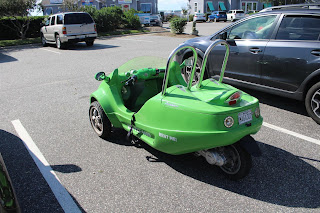 Cheaper than a Slingshot 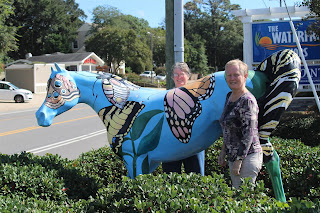 The horse seems a tad unusual 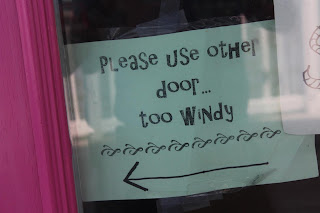 Even today after Maria left 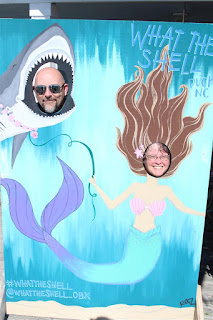 Somebody has somebody else on a leash 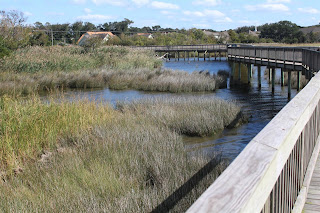 The boardwalk at Duck North Carolina 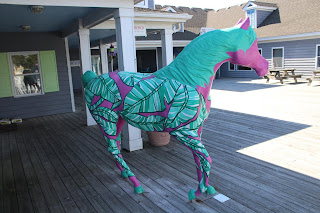 What have they been feeding the horses around here? 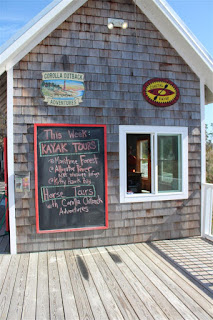 May have to do this next time 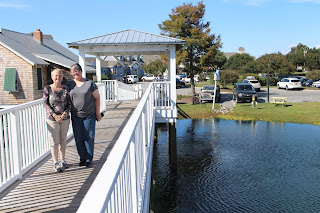 The ladies make it all worthwhile

When we first got to the area, we saw a Super Wings shop and thought they had chicken wings. Apparently we weren't the only ones to make this mistaken assumption. Super Wings was actually a beach shop with multiple locations all the way down the OBX. And they had T-shirts, the one souvenir that we had not yet selected. Imagine our dismay when we stopped at the Super Wings in Duck and found it was closed until 7:00 PM. That seemed like a strange time until I realized it was the last day of the month and also of the quarter. I'd bet that they were closed for inventory taking. The next store in Kitty Hawk had the same message in the window. 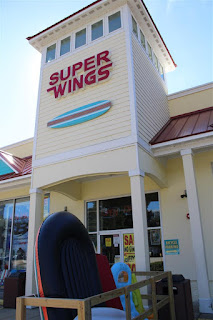 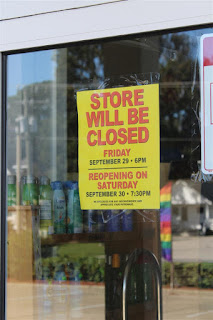 With Super Wings out of the picture, the next recommended location for T-shirts was Ben Franklin. Sandy and I got carried away and bought three shirts each. The best find was one that had NC Highway 12 and the pictures of all four lighthouses we had visited. Linda said we all have to bring this shirt to SEVROC next May. 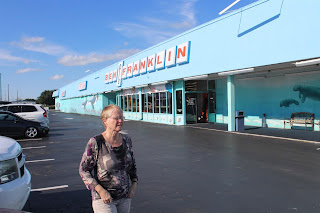 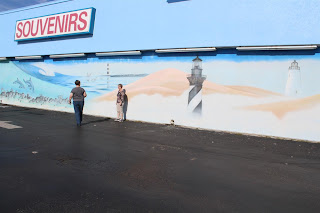 I recognize Hatteras and Ocracoke Lights 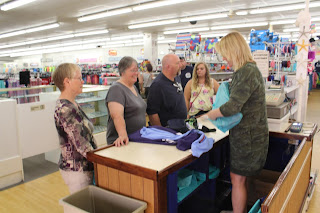 We hadn't planned on quite this much apparel

Shirts in hand, we continued down US 158, the main four-lane north/south drag. On the way, we saw a pickup truck that had run up on the lawn of a business, with several police cars surrounding it. I wasn't able to get a good picture but I had to wonder where anyone in their right mind would have thought they could run on this narrow sliver of sand. 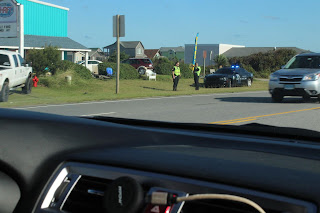 There were more police cars to the left


Sam and Omie's was where they said it would be, directly across the road from Jennette's Pier. It wasn't busy yet, but they said they would not seat us until our whole party arrived. Denise texted to say there were seven of them but that they were delayed en route. The four of us sat outside and waited, watching as more and more people started to arrive. Finally, after another text exchange with Linda, Denise told the four of us to go ahead and they seated us right away.

While this was supposed to be the top seafood place around, not one of us at our table availed ourselves of anything nautical except for the bowl of Hatteras clam chowder I tried. The white, creamy new England chowder is great and I have tried the red Manhattan chowder, but this was clear with lots of clams and veggies. Quite tasty. But that was the last of anything from the ocean as we selected more mundane options from the menu. I guess we aren't as adventurous as we like to think we once were.

Denise, Nic and the rest of the seven arrived just after we had been served. Unfortunately, it took them a while to get seated since business had heated up markedly in the interval. They were just getting into eating (many actually having the bounty of the sea) when we left. 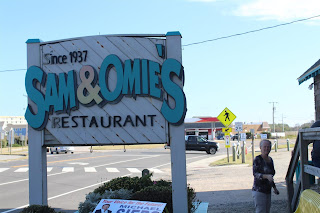 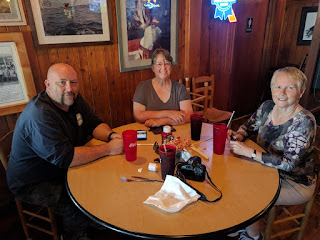 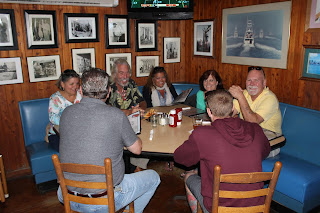 The rest of the gang

We skipped the four-lane US 158 and followed NC 12 all the way back to the house. Through Nags Head, Kill Devil Hills and Kitty Hawk, you would not believe you were in the same place. The hustle and bustle of the big road was only yards away and yet this was a quieter, calmer and more relaxed place with hardly any sense of commercialization. Other than the hotels, that is, and the fact that almost every property was for rent.

At the house, we loaded all our gear except our overnight bags into the car in preparation for an early morning departure. Then we said goodbye to our new friends, excellent folks one and all. It was a real pleasure to share the week with them. Finally, it was off to bed with our alarms set for 5:00 AM.

I have to add a link to Linda's blog, Days to Remember, which is part of her bigger website The Beauty Around Us. Whether it is sharing her adventures in the blog or just showing us what she sees through her photographs, the site has an unusual depth and texture that leaves me in awe of her skills every time I look at it. So enjoy a different and better perspective on our time here in the Outer Banks and, if you like what she does, leave Linda a comment.
Posted by Jim "Skid" Robinson on 9/30/2017

Thank you for the shout-out and the compliment about my blog/web page. You do an excellent job blogging too, in many ways much more detailed than me! I believe we complimented each other well on the telling of our OBX vacation. I uploaded my last blog post about our trip a few minutes ago. Now I can begin working on the SEVROC article :-)