I was officially a full-fledged senior citizen when I woke up this morning. Happy Birthday to me. Funny, I didn't feel any different.

We turned on the TV and watched some network morons reporting from Florida on Hurricane Irma while standing in the teeth of the gale. Do they all need the Anderson Cooper style drama and theatrics to cover the storm? Even Anderson was back out there, too.

The Dutton Inn breakfast room had a buffet of cereals, fruit, biscuits and gravy, pancakes, sausages and scrambled eggs. I stuck to my guns and had scrambled eggs and sausage rounds covered on gravy. It wasn't the same as biscuits but it did fill me up without starches. My daytime blood sugars have been between 6.0 and 7.5 four hours after meals, infinitely better than the 12+ I was running just a couple of weeks ago.

With another free evening, we looked for a show to attend. Sherm found a tribute show called Patsy Cline and Friends. It included a comedian named Terry Sanders who he and Pat had enjoyed for many years, playing as Homer Lee at Silver Dollar City. We drove around and bought tickets at Half Price Tickets, where the lady gave us all military rate because of Sherm's Coast Guard Veteran hat.

Next on the agenda was WalMart. The store here had a unique layout with the door at one end and the food section across the middle. We bought some food items and I got 48 Wilson Duo golf balls, enough to last me for at least several months. Longer during the winter. We took the food items back to the room and got them into the fridge straight away.

My birthday plan had been to go ziplining. The big place here offered a seven line adventure that would take about two hours. Since Sherm and Sandy wanted to watch but didn't want to participate, this wasn't a good fit. The lady where we got the show tickets mentioned Parakeet Pete's Zipline down on the Lake Taneycomo waterfront in Old Branson. They offered individual rides.

In Old Branson, we parked in a big lot near Bass Pro and another nice man in a stretch golf cart offered us a ride. There was no line at Parakeet Pete's so they gave me two rides for the price of one. Sherm and Sandy both took some photos as they belted me into a chair (no harness here) and dragged me all the way across Lake Taneycomo to where I was above a highway on the far side. Then they released me and I slid down, braking sharply at the end. Then I did it again. I'll be ready for the real adventure the next time I get a chance. 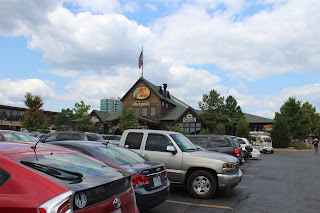 So many vehicles, so few spaces 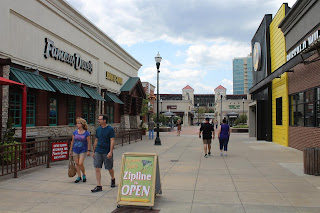 This waterfront is a nice spot 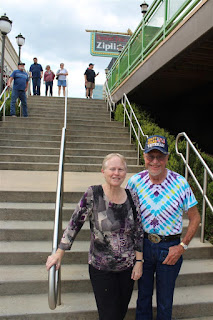 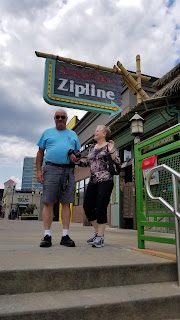 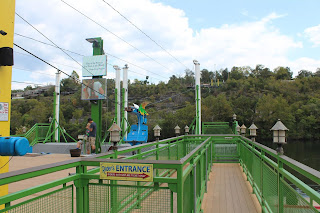 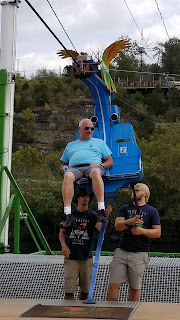 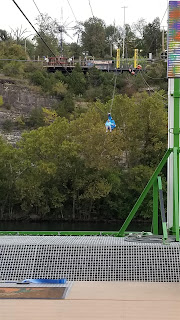 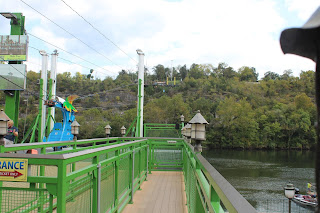 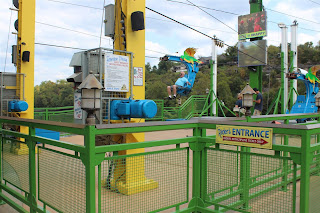 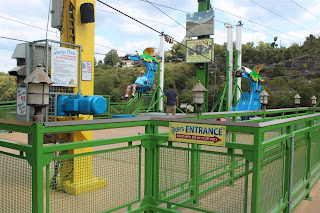 The golf cart driver told us that there was a water and fire display that happened a short way down every hour on the hour. Lanny caught up with us as we were walking down. Lake Taneycomo is the longest, skinniest lake I can recall seeing and looks more like a river. In fact, we saw a riverboat going by as we walked. 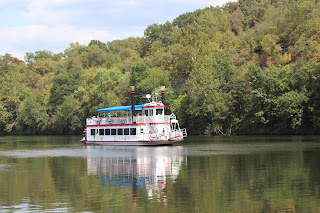 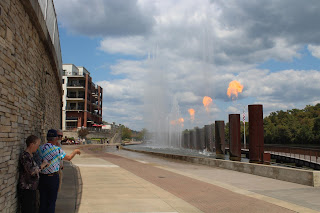 
After the fountain display, the golf cart driver came by and we hitched a ride back to the parking lot.

Next on the agenda was lunch at the Golden Corral buffet. We followed the Red Route around town and arrived before Lanny, who stopped at his room on the way. The place was busy. Faced with many temptations, I stuck to prime rib, pork, steak, bacon and mushrooms. I could have had a very nice salad but I try to avoid rabbit food at a buffet to maximize the return on my dollar.

Afterwards, we returned to the room for a nap before show time. 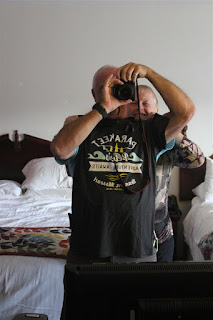 Sherm bought me a shirt for my birthday 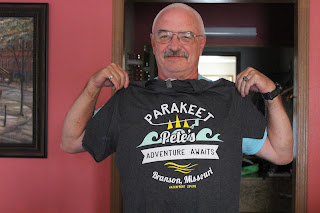 It was almost 7:00 PM when we headed over to the theater to see the show. Low and behold, Homer Lee was directing traffic in the parking lot. Sherm had a nice talk with him before we went in. 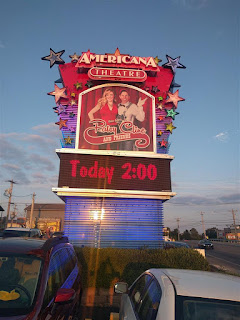 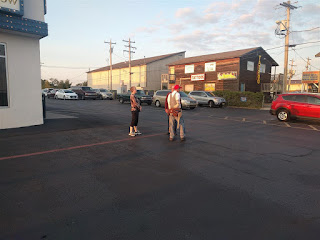 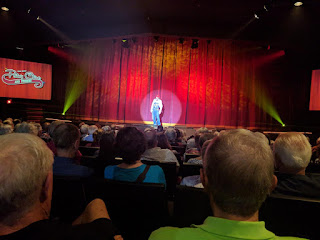 The show as pretty good. The singer, CJ Newsom did not impersonate Patsy Cline. Instead, she told us about moments in her life and sang some of her hit songs. She also sang songs by some other singers who were influenced by Patsy like Loretta Lynn, Dolly Parton and Reba McEntire. We liked when she sang Jolene, the name of our oldest grandchild. The singing was interspersed with various comedy bits involving Homer Lee, Barney Fife, Grandma Beulah and Joan Rivers, all played by Terry Sanders. There was also a brief section with Janice Martin, who played Orange Blossom Special on a fiddle while hanging upside down by silk ropes. She has her own show, which would be worth seeing.

The biggest thing I learned was not to fly in a small pane in bad weather with a pilot who is not instrument rated. I am sure Patsy and Buddy Holly would both agree.

There was a busload of Canadians in the audience. Hugh and Rhonda Love of Stratford, Ontario got selected for personal attention during the first segment. Homer did some research and returned to them in the second section talking about Elora, Wilmot and Woodstock. We talked to a few folks at intermission and found a lady from North Bay, although the tour had left London. They were headed home tomorrow. 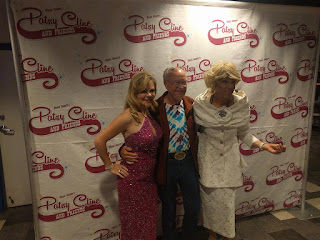 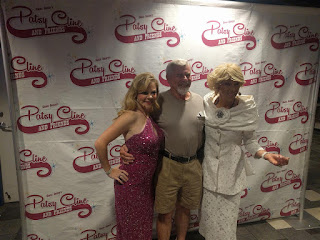 Lanny in the same pose 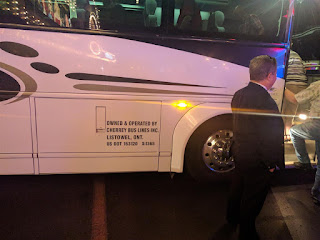 A touch of home

Just as yesterday with the Duttons, the show included a tribute to the US military veterans. This appreciation for service to the nation is very common down here. We could stand being a little more thankful to our Canadian veterans back home.

Back at the room, I did a little bit of blogging but it was almost 11:00 PM, so I didn't stick with it for long. Tomorrow, it will be on to the VROC reunion in Eureka Springs, Arkansas.
Posted by Jim "Skid" Robinson on 9/10/2017