It was hard to believe that WWR XI was in the history books and it was time to move on. I want to thank Flash and Kopperhed for the time they put in organizing this. Every day was a new adventure with excellent roads and interesting and entertaining activities. The hotel was good and the WiFi was way above what we usually expect at a VROC gathering. Kudos to both of you for doing such an excellent job.

Bucky joined us at the Lewis Cafe for one final breakfast. I had the same whole hog omelette with extra mushrooms but I added a side of country ham to round it out. I am not aware of any establishment north of the 49th where I can get real country ham. Sandy had hot cakes with bacon again. 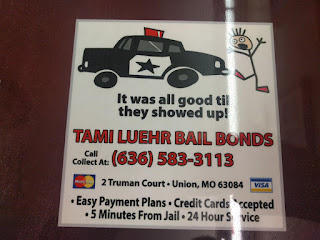 Ad on the table at Lewis Cafe

After hooking up the trailer, I loaded the bike. Because I wanted to try a new way of tying down, I turned a five minute job into a half hour ordeal that involved tangling one of my good tie down straps. The change in the anchor points was worth it because the bike was held a lot more securely with less tension.

Once I got done making an easy task look difficult, we loaded all the rest of the gear and went to check out. We pointed out that the name, Budget Lodging, led to an expectation of lower standards that might cause travelers to not choose it. The lodging was definitely first rate. The lady said that the motel was built by her husband's mother almost thirty years ago and Mom picked the name, so they are stuck with it as long as she is alive.

We started down I-44 at 10:20, making a brief fuel stop at the Flying J in Sullivan. The tie downs were still tight so the new method appeared to be working. Truck traffic was heavy today and electronic signs told us that of 583 fatal wrecks in Missouri this year, 67% of the deceased were not wearing seat belts. What a cheerful message. 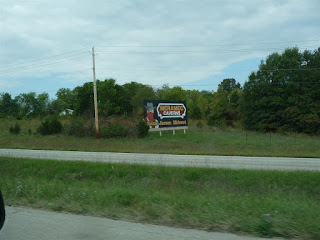 We never did get to the caverns 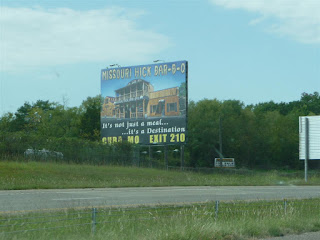 We did get there 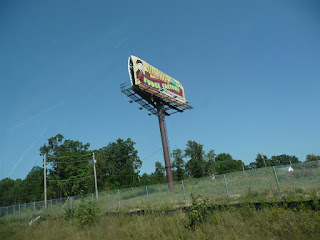 There are actually fudge packers in Uranus - only in Missouri The ever present limestone 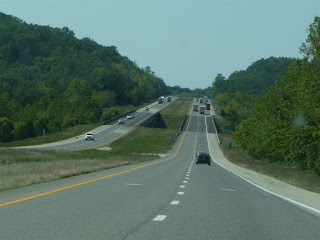 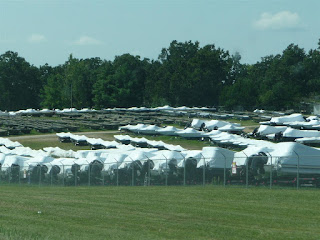 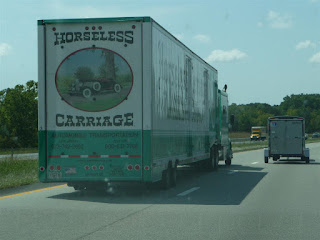 I wonder what he is hauling 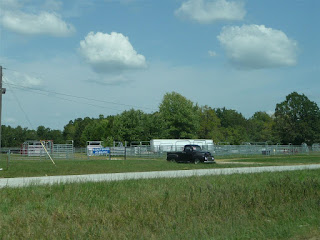 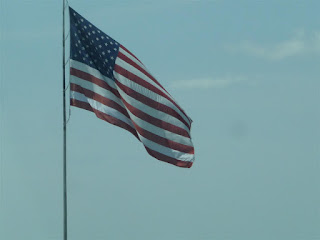 The huge flag was blowing lazily

We needed lunch so we followed the GPS and got off at the first exit after we turned south on US 65 in Springfield. The exit was heavily under construction but we made it to McDonald's, our first stop at the Golden Arches on this trip. We ate inside, where I had a chicken bacon ranch salad. Sandy had a hamburger and her first Mickey D smoothie of the trip. Then we continued south to Branson. 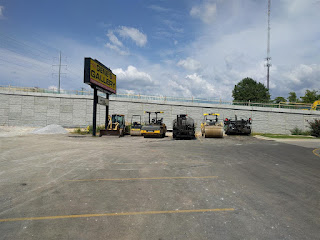 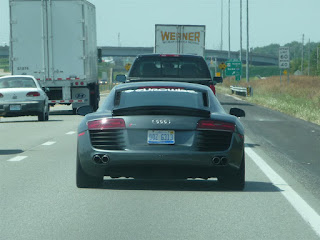 This one moved out briskly as soon as an opening appeared 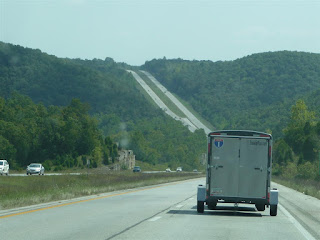 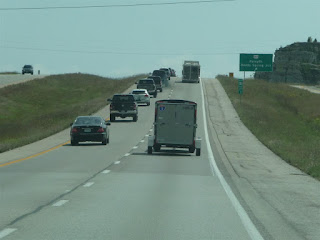 We stayed on the slow lane


Scenes from the Branson Strip 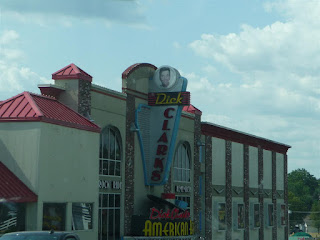 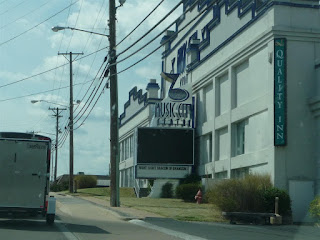 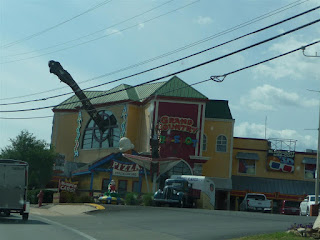 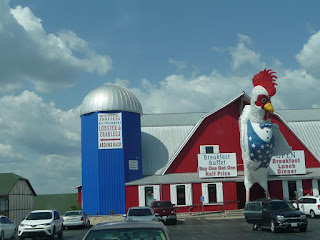 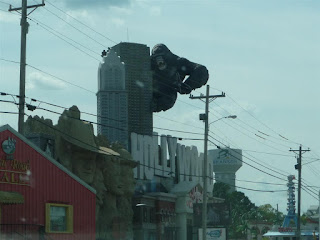 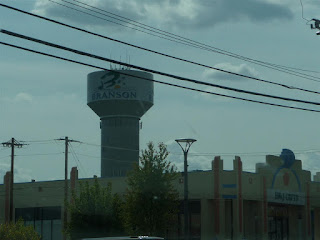 We worked our way down the strip and arrived at the Dutton Inn right at 3:00 PM. This was a stroke of luck because the check in time was also 3:00 PM. Our room was on the second floor, which appeared to be the first floor from the back side due to the slope. They let us park the trailers in a level spot reserved for tour buses because the next bus wasn't arriving until Monday night.

Sherm was all set to go out to WalMart to buy some insulin to replace what he left in the fridge in St Clair. Just as we were going out the door, he realized he had put the vial in his pants pocket to put it in his cooler in the truck. He forgot to transfer it to the cooler so it was still in his pants, which meant we did not need to go to the pharmacy. 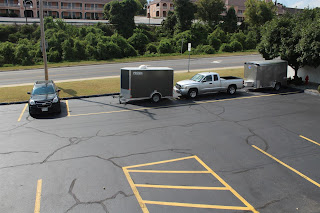 Lanny was staying in a different motel on Gretna, but he came over in time for The Duttons' 7:00 PM show in the theater out front. Sherm had reserved front row seats while we were motoring along I-44 and they were ready for us at the desk when we arrived. We started to walk up the hill to the theater when a man with a stretch golf cart asked if we wanted a ride. We rode up and then Sherm and I rode back down. I forgot my tickets and Sherm forgot his phone. Then the nice man drove us back up the hill again.

The Duttons' show featured some excellent music by the family but, with brother Benjamin no longer part of the show, seemed to be missing a spark. The younger kids have taken a larger part and, hopefully, they may recapture the missing spirit. 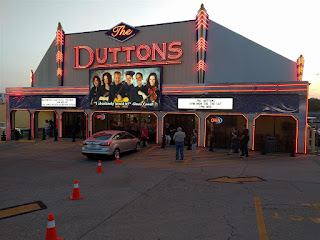 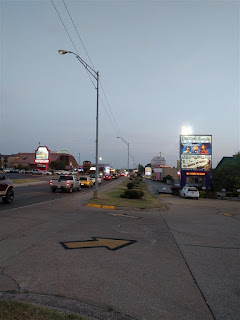 Traffic lined up on 76 at show time 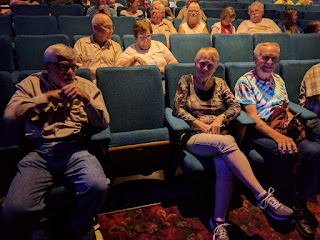 Front row seats at The Duttons'

After the show, we walked Lanny back to his motorcycle before going back to the room. 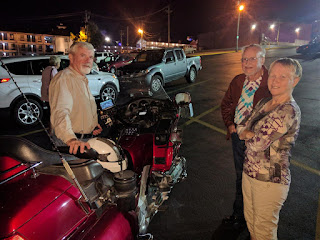 This was the last night I would be able to sing When I'm 64 and mean it. Tomorrow, I will be a real, honest senior citizen. 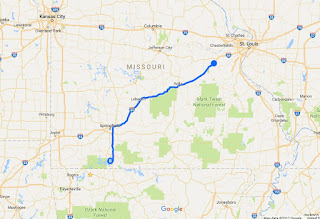