Time to go home. Our basic Travel Medical Insurance covered 17 days per trip and this was day number 16. We were up at 5:00 AM and rolling by 5:25 after saying goodbye to Sherm, who we probably won't be seeing again until Williams, Arizona next June.

It was a clear morning with, surprisingly, no fog. It was already 68F and we had to reflect on the amazing weather over the last two weeks. Usually, we catch at least some and often more rain.

The McDonald's in Berryville was open so we stopped. In the interest of covering ground quickly, I had to make some exceptions in my diet over the next two days. The wind had the feel of rain in it and there were clouds to the north. Sure enough, the wet stuff started falling just before we reached Springfield, Missouri just after 7:00 AM. 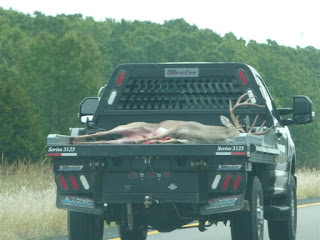 The trip across Missouri on I-44 was uneventful. There were several troopers giving out tickets near Cuba and the rain came and went before finally stopping near the Illinois border. 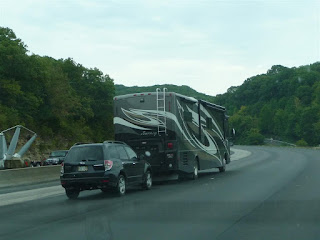 I don't want a motorhome but, if I did, it should look like this 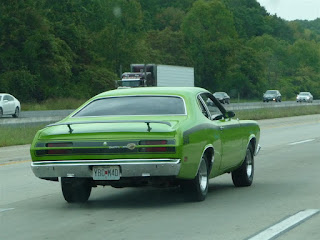 Duster - A blast from my past

We took I-255 south of St Louis due to possible civil unrest, crossing the bridges into Illinois at just after 11:00 AM. As we reached the middle of the state, the temperature readout said that the ambient air had reached 89F. Thanks to whoever invented automobile air conditioning. We were continuing to listen to the audio book Unbroken that Zeke and Hang had lent us. This was an amazing true story of perseverance. Another fuel stop and McDonald's diet cheat kept us going. 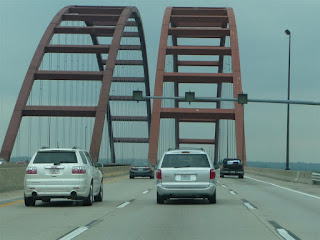 I-255 over the Mississippi River Land of Lincoln - I have to be politically correct again 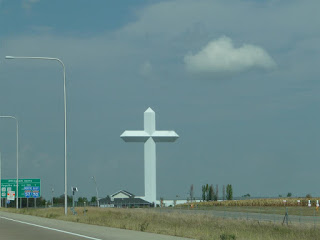 We crossed into Indiana at 2:20 PM. There was a lot of construction along I-70 but it did not hold us up much. 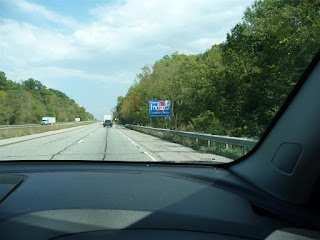 I took the I-465 loop south of Indianapolis. There was a bit of a traffic backup as we approached our I-69 exit in the northeast quadrant, but we were soon running free with an unusually large number of northeast bound cars. The last time I saw this much traffic, a Colt's game had just let out. 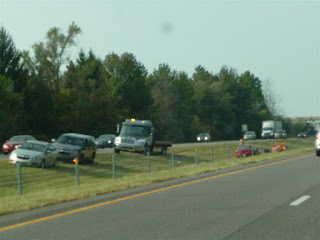 I stopped at a Love's truck stop about an hour before Auburn, Indiana. We fueled and I used my Hilton Honors app to book a king room at the Hampton Inn in Auburn. We switched to this a few years ago when the Super 8 let its standards slip. The Hampton has turned out to be a nice treat for our last night on the road.

The Hampton Inn was, again, everything it was cracked up to be. Big room, huge shower, comfortable mattress and superior pillows. The lobby was very fine and the staff was very competent. We just finished our snacks instead of going out for supper and then turned in quite early. 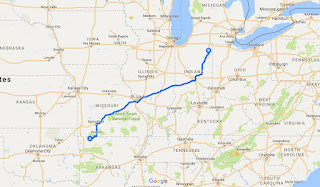