Fall had arrived. Days were now shorter than nights. We were driving an Equinox on the equinox. It was over 80F in Sudbury yesterday, a record for that date. Tomorrow, the Humidex is expected to be in the mid 90's. Very unusual, and the trees seemed to be slow in changing colour as well.

In our three days at home, we  paid the bills, did laundry, Sandy signed the final papers for Jan's house sale and I caught the blog up. I also installed Android 8.0 (aka Oreo) on my Nexus 5x phone. Now we were off to the Outer Banks of North Carolina (which I now know to refer to as the OBX). Our VROC friends Billy Bob and Linda from Pennsylvania were going to share with a group and there was one extra bedroom in the house, so they invited us.

Today, we were going to Bob and Linda's in Warren, Pennsylvania. Tomorrow, after visiting the Flight 93 Memorial in Shanksville, we had rooms booked at the Best Western in Fredericksburg, Virginia. We were planning to arrive at the house in Corolla Sunday afternoon.

After careful consideration, I decided I could take a break from the diet for the days we were on the road. With a McDonald's sausage McMuffin clutched firmly in my fist, we were rolling out of town just after 8:00 AM. The Garmin projected an arrival time in Warren of 4:02 and I had told Linda 5:00, so all looked well.

Near Waubaushene, 150 miles down the road, I realized I had left our camp chairs in the garage. Sandy wrote a note the day before but had assumed I had gotten them out this morning without asking. We need to practice communications. We will get some at Wally World USA. We fueled at Waubaushene and I got some snacks and a

After enjoying the audio book Zeke and Hang lent us, we stopped at Chapters in Barrie and picked up another one. Indestructible by John Bruning. Like Unbroken, it dealt with WW II in the Pacific, airplanes and the Japanese. All it really had to do was keep me awake.

It was 83F when we left Highway 400 for the 407 Express Toll Road. Traffic was getting busy and I was willing to pay to avoid the worst of it. We followed the ETR all the way to Burlington where we switched to the Queen Elizabeth Way. On the Burlington Skyway, something happened going to other way because there were fire engines, police, ambulances and wreckers. Traffic was back up for miles and I gave thanks that it wasn't on out side of the road. Still, we almost had our own pileup due to the rubberneckers slowing and veering. 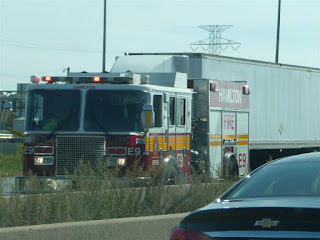 Fire/Rescue on the Burlington Skyway Toronto bound traffic at a standstill

We made a quick stop at a McDonald's in Grimsby to get lunch to go. On the way out of town, I saw a billboard for The Organized Crime Winery. Sounds like it might need a visit when we get back. At Fort Erie, we headed directly over the Peace Bridge, where we had both lanes, and then found there was no one in the NEXUS lane. The officer asked our citizenship and if we had anything to declare. I said one bottle of liquor and he said "Have a nice day". Fastest crossing ever. We did see some vehicles lined up for a backscatter X-Ray examination but we were by and on I-190 by 2:30. Although the GPS tried to get us down to street level again, we stayed on 190 until we reached the westbound New York Thruway. 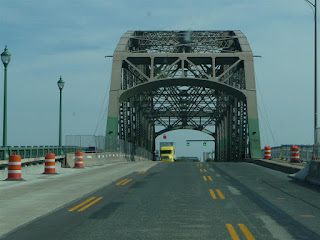 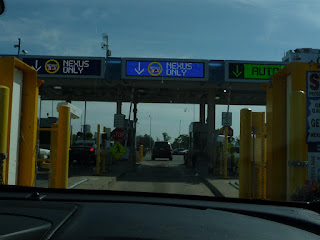 After a bathroom break at the Angola Service Center, we left the Thruway and headed south to Jamestown. On the outskirts, I stopped a a Mickey D's and asked for a Seniors Coffee. Apparently, this establishment stopped serving them so I had to get a small black normal coffee instead.

Jamestown was the home of two old friends from the Waterloo County Touring Club Cyclefest days. Bill Fulton and his wife Edna came with a group every year until the event left Chicopee after 1997. Bill passed away in 2011 at the age of 97, but had kept riding (with a sidecar) until he was 94. Edna joined him in 2014. They were good folks and I couldn't come this way without thinking about them. 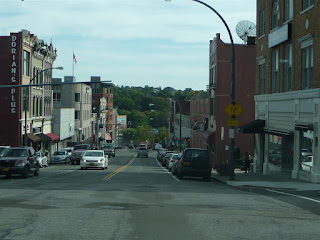 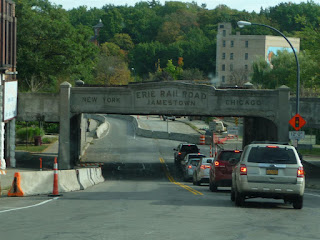 This is a bit of railway history

South of Jamestown, we turned on US 62. Funny, we were on US 62 last week in Arkansas. It ran from Harrison to Berryville and right through the middle of Eureka Springs. We crossed the Pennsylvania line soon after and Warren was not far beyond that. We pulled into Billy Bob and Linda's driveway well before 5:00 PM 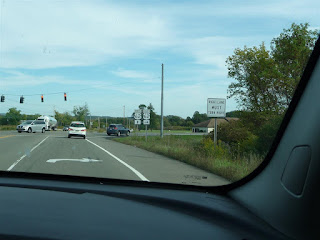 US 62, an old familiar friend 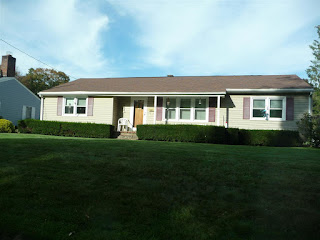 After unloading our overnight bags, the four of us went to historic downtown Warren, where we had supper at the Plaza Restaurant, a local fixture for over fifty years. They had the best value I have seen so far in a mushroom/Swiss burger with no bun. The burger looked like it was over the advertised half pound with the cheese and mushrooms melted to the top. I had some very good coleslaw to complement it. Sandy had a small chef salad.

After supper, we walked over the bridge across the Allegheny River and looked at a park. Then we checked out the memorials and monuments on the downtown side. This town just dripped history. 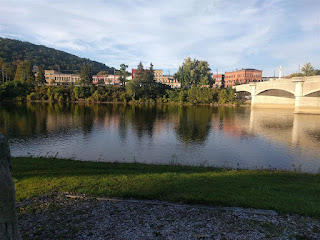 Downtown Warren across the Allegheny River 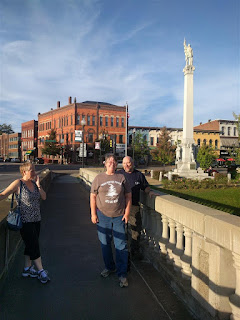 Sandy, Linda and Billy Bob with the Civil War memorial behind 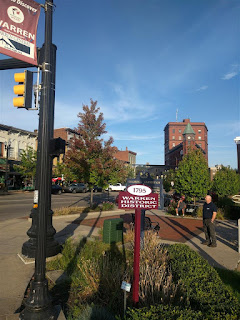 It is that, all right 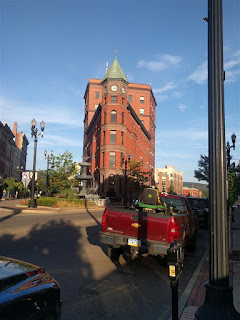 They even have a flatiron building 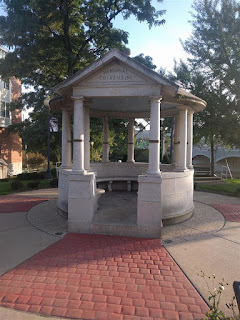 WW I memorial to the AEF 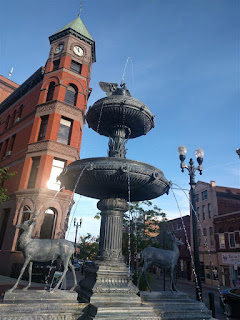 Back at the house, we visited for a bit. I ducked doing any blog work, so I will have double duty tomorrow. Sandy and I both turned in early in anticipation of an early start tomorrow.

Linda is a great photographer and maintains an excellent blog called The Beauty Around Us. I know she will provide an interesting  account of our trip together. 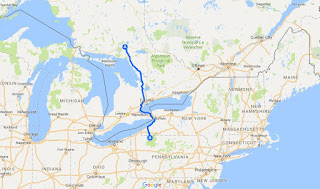