Zeke and I were up at 6:00 AM and on the road to Wally World by 6:30. The Auto Center was supposed to open at 7:00 and young Dalton opened the door at the prescribed time. The only problem was that the tech who was supposed to be here early didn't show up. The manager called another fellow, Tim, and he arrived not long after.
Tim checked the tire balances and said the front tires were way out. He remounted all four, oriented them correctly and balanced them again. One of the front tires had over four ounces of weights on it and, in the final analysis, only took 1.25. He said the other one was worse. I guess my theory that anyone who would make such rookie installation mistakes probably couldn't run a balancing machine either wasn't far from the mark. I couldn't hold the installer responsible. Instead, in my opinion the manager was totally at fault. WalMart charged me $36.00, the price of four tire balances. Good folks.

The proof, however, was in the test drive. I took the car out on the Interstate and cranked it up to 80 MPH. Smooth as silk. I took my hands off the wheel and it tracked true. My favourite four wheel vehicle was back. I will be sending my bill and a long letter to the tire dealer's head office. 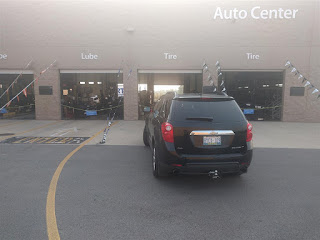 Waiting to fix the tire issue

Back at the house, the ladies joined us as Zeke took us all in his pickup truck for breakfast at Bob Evans. Sandy and I both had ham/cheddar/mushroom omelettes with fresh fruit on the side. 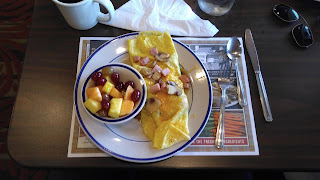 After we were done eating, Zeke navigated around the Labor Day Parade route and took us to Oak Ridge Cemetery to see Lincoln's Tomb. He was especially tickled to get a picture of Sandy and I rubbing Abe's nose and then we walked through the tomb to pay our respects. Finally, we drove to the mausoleum where his body had been temporarily interred (and almost stolen) while waiting for the tomb to be readied.

I was good. I did not voice my belief that Abraham Lincoln, in his zeal to keep the Union intact, destroyed the concept of state sovereignty as described in the 10th Amendment. The idea of a very limited federal government was the goal of the Founding Fathers. I maintain Lincoln led the federal government to take up arms and violate that sovereignty. His stated objective was to preserve the Union, not to free the slaves as some folks today think. But I was in Illinois, The Land Of Lincoln, so I stayed quiet. 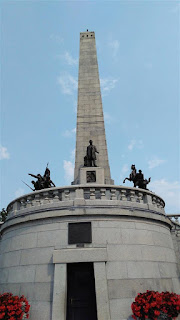 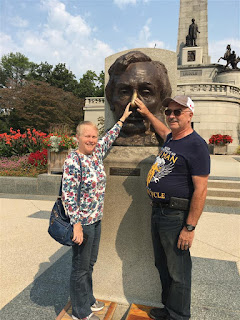 I need to learn to suck in my gut 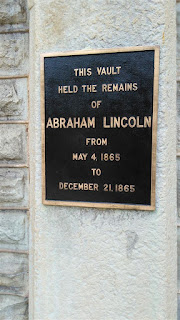 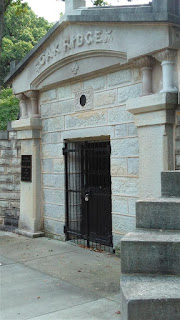 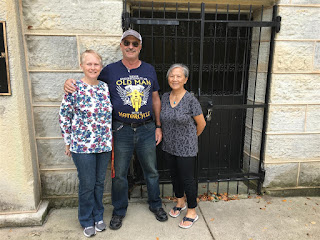 Back at the house one more time, I hooked the trailer up and we loaded the luggage. Many thanks to Zeke and Hang for putting us up and feeding us. We will see you in Eureka Springs next week. 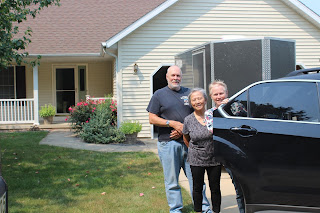 The hosts with the most

We left Sherman a few minutes after noon. Almost immediately, as I was following a flatbed trailer too closely and was dropping back, a road gator (tire carcass) appeared from under him. I wasn't able to swerve safely due to our trailer and hit it square on with the right side wheels. Lucky for us, it was off the boat trailer stopped just down the road so it didn't do the same damage a big truck tire would have.

We had been considering joining Sherm and Lanny to go to the top of the Gateway Arch but, since we were running so late, I told them to go ahead without us. We already went to the top back in 2013. They went up but were not too impressed. The gondolas that take people up were small and they shared with two very large people. The museum at the base was also closed due to construction. I suggested they check out Grant's Farm, a tip Zeke gave us.

I had complained to Zeke and Hang that Sandy slept in the car instead of keeping me awake with conversation. They listen to audio books on the road and Hang lent me the CD's for Unbroken: A World War II Story of Survival, Resilience, and Redemption. This was the story of Louis Zamperini, an Olympic runner who ended up surviving an ordeal in the Pacific Ocean in World War II. It kept me awake for the afternoon.

After following I-55 to the St. Louis area, we switched to I-255 to bypass the city to the south. The GPS told me there was a WalMart in Cahokia, just short of the Mississippi River Bridge to Missouri. I needed to get the Equinox wheel nuts retorqued and any WalMart with an Auto Center would do it for free. The Cahokia location turned out to be a tiny store that was missing two things. An Auto Center and a white face. A quick check confirmed Cahokia butted up against East St. Louis, a place I had been warned to avoid. We moved on.

We crossed Old Man River just before 2:30 PM and found another WalMart just across the Missouri Line. This was a Super Center with an auto service facility. I was pleased to see the tech didn't take my word about 140 foot/pounds of torque on the lug nuts and confirmed it for himself on the chart. 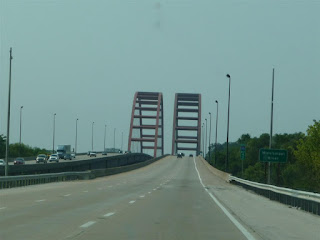 I-255 bridge across the Mississippi River 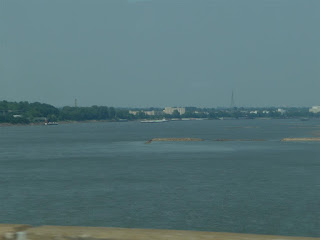 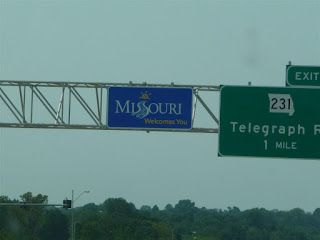 Unlike the last time we came this way, I did not miss the ramp to I-44. It wasn't far to St. Clair but the folks heading east weren't doing as well. According to later State Police records, an eastbound Toyota Tundra was towing an RV trailer that started to skid when the brakes were applied. The Tundra ended up on top of a guard rail while the trailer went over it. The driver was seriously injured while the passenger just had minor injuries. Eastbound traffic was backed up for miles. 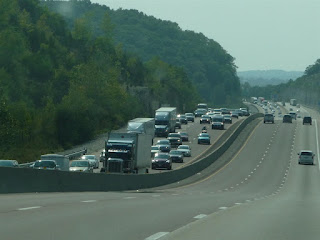 Nobody going anywhere fast due to wreck on I-44

Wolfman's Wandering Rally is an annual VROC event that honours Rick 'Wolfman' Jakubas, VROC #3. He was one of the founders and the developer of our website. Rick died in a wreck while riding the Blue Ridge Parkway in 2005. The rally is held in a different place each year.

The 2017 WWR is the 11th. This one was being organized by Kopperhed and Flash and was based at the Budget Lodging in St. Clair, Missouri. We have stopped at this exit for many years to get breakfast at McDonald's and fuel at the Mobil 1 on our way to Eureka Springs.

It was 95F when we pulled into the motel lot. Deb and Brillo were there in their Audi, along with Watchman and Liz on their bikes. While I was unloading, the Chicago crew (Moser, Pecos and friends) arrived, as did Sherm and Lanny. El Nomad and Bucky from Colorado showed themselves as well. 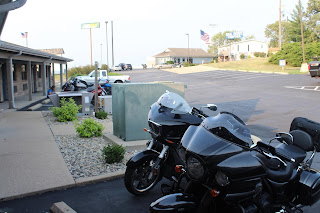 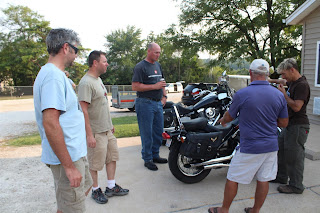 Brillo and the Chicago folks

We found Willie Wonka wandering around the lot. He texted me and, as I was typing a reply, Sandy saw him walk past out door. Many of the local places were closed because it was Monday, so Sherm, Lanny, Willie, Sandy and I walked to the Subway right across the parking lot. I has a roast chicken breast salad with double meat while Sandy had a ham and provolone sandwich. I got a meal deal and gave her my cookies. 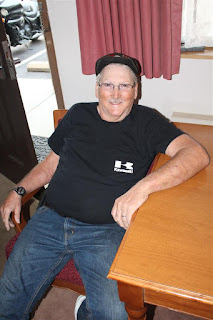 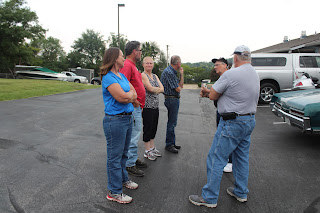 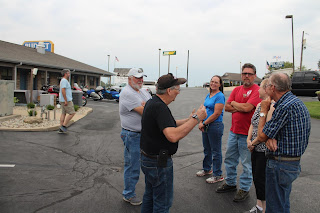 After supper, Willie headed back to the KOA where he was staying in his rolling Taj Mahal. He has some business tomorrow and the next day but we will be looking for him and The Lovely Carlene on Thursday.

Sandy, Sherm and I adjourned to our room where I blogged to the background of severe thunderstorm warnings coming from the TV. I got yesterday and today mapped and the photos sorted. I posted these without commentary or captions, expecting to get the rest caught up soon. Sandy and Sherm were already asleep, so I hit the sack as well. 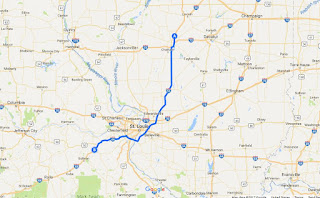