We heard a motorcycle fire up at 5:20 AM. Some of the folks began heading for home early. I thought it was Wolf heading back to Seattle but someone told me it was Butch on his way to Kentucky. There were more than a  few empty spaces when we finally looked outside at 8:00 AM.
Lanny and Nash rode to the Gazebo with Sandy and I for a final breakfast buffet. They let us sit right inside the Gazebo and Donna's daughter looked after us. We said our goodbyes to the staff and told them we would be back next year. In fact, our Stonegate rooms were already reserved for 2018. I went so far later as to write a review for TripAdvisor. Thank you for breakfast, Nash. I'm glad we didn't raffle off your motorcycle after all:-)) 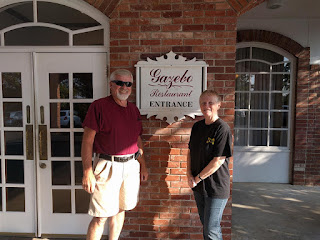 Last day at the Gazebo

Lanny decided he was going to take the Eureka Springs Trolley downtown and Sherm decided to go with him. Sandy and I had a different mission. 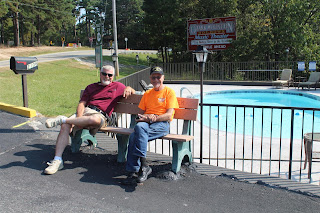 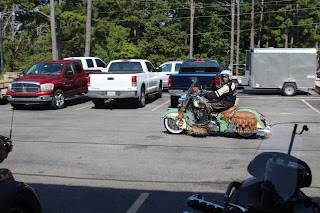 Nash had to head home to make an unexpected family commitment

Teri worked for Kawasaki for years representing the Riders of Kawasaki affinity group and editing the Kawasaki Accelerate magazine. Through this time, she became more than a corporate representative, she became a friend. She was now living near Yellville, Arkansas, a couple of hours away, and I knew that there were many folks here who would like to see her again. Following some texts back and forth, she agreed to ride over and we agreed to meet her part way in Alpena about 1:30 PM.

The Meet Teri group consisted of Sandy and I, Cheap B, Rainman and Ice Cream. We left about 11:20 AM and headed out via Rockhouse Road and 221. In Berryville, we rode south on Missouri 21 to Metalton and then used County Roads 719 and 103 over to US 412. This took us north right into Alpena.

It was intimidating riding the twisty roads with Cheap B right behind me on his 2000 Vulcan. He is one of the more competent twisty riders I know, right up there with Lanny and Sherm, while I am cautious due to potential vertigo and panic attack. Cheap B says I'm just too careful getting into the turns and I know I need to fix that. I have been feeling better recently and know that I could improve a lot if I could just ride roads like this every day. Unfortunately, the number of roads like this back home is exactly zero. When we turned at Metalton, I let Cheap B go ahead and there he was, gone.

In Alpena, we waited for Teri in the shade of the roof over a closed Valero station. Lots of gas stations closed in this neck of the woods long before the hurricanes. While we were waiting, we watched Alpena's finest pull over a pickup truck for some violation or other. The officer was wearing jeans and a T-shirt. It must have been dress down Saturday. 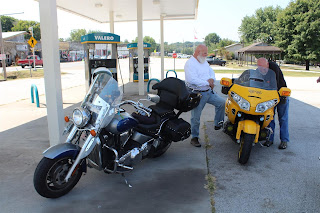 Cheap B and Rainman waiting on a woman 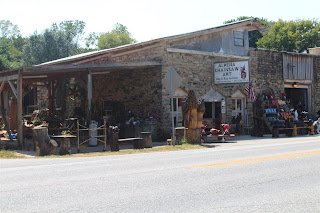 The chainsaw art folks are still in business 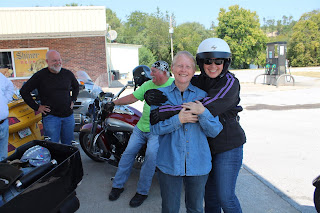 She's here - greetings all around 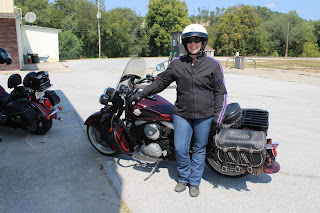 Teri, her Drifter and a very warm jacket 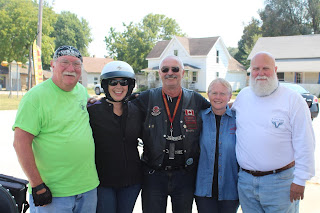 We rode straight back to Stonegate on US 62. Nothing new there since we came this way on our way back from Cliff House the other day. Back at the hotel, folks were very pleased to see Teri again and vice versa. Her friend John rode in a short while later from Mountain Home to say hello.

Yesterday, Lanny took Vickie for a ride on his GoldWing to show her what leaning was really all about. Today, he took Debbie. She was a bit nervous on the way out but gave it a thumbs up when she got back. 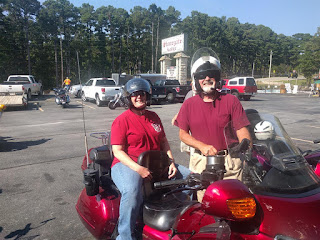 Debbie and Lanny before the ride 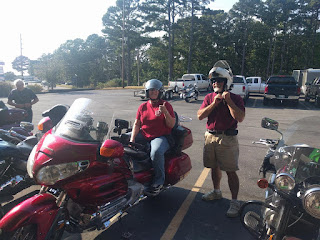 Hot Sauce had kindly made up another batch of his chili using the leftovers from the BBQ last night. He swore once again that it was mild but I didn't give him that nickname for nothing. Sandy's acid reflux prohibited her from even trying it, so we planned to go out for supper with Teri and John. Cheap B, Wanda and Rainman joined us.

After looking through the list, I floated the idea of the Bavarian Inn. It was accepted and we headed that way soon after the 5:00 PM opening time. It was quiet and they found us a group table. Sandy had the special, a Czech plate of pork loin and sweet and sour cabbage. She wasn't much impressed but I was blown away by the Wiener Schnitzel with a side of Jager gravy. It was a great plate to end the week with. 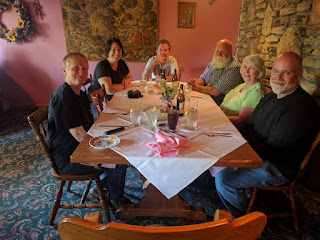 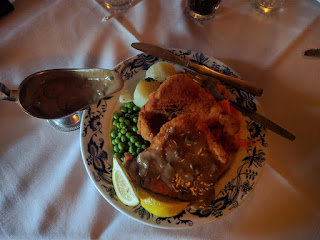 After supper, we rode back to the hotel and bid Teri and John farewell as they headed for home. Then there was a flurry of trailer connecting, motorcycle loading and luggage stowing until everyone was set for morning. This was followed by a round of goodbyes since some of us would be departing quite early.

When we left home on September 1st, we seemed to have so much time ahead of us. Even when we arrived in Eureka Springs on Monday, six nights seemed like a long time. Yet here it was, gone again. Still, it was worth it.

Thanks to Laura, Bill, Gambler and Bubbles for the organizing work. And thanks to Sherm for the sharing and the companionship once again. We 'd do it even if it didn't save us any money. But it did. And thanks to the whole VROC family for being who you are. Our retirement would be an empty place if we didn't have all of you to share it with.

I set our alarm for 5:00 AM. We would be up before the dawn, so we didn't stay up late tonight. 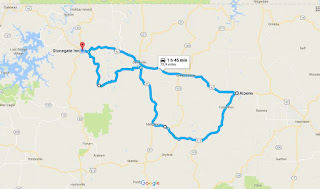