The news this morning was disturbing. In addition to the continuing onslaught of Hurricane Irma and the newly named Hurricane Katia threatening the Mexican gulf coast, they said that an 8.1 earthquake off the Mexican southern coast caused some fatalities. Watchman blamed the eclipse for all the natural disasters. He said that if anyone was silly enough to believe him, he would keep repeating it.

There were no group rides planned today. We had a quick breakfast at the motel, where Sherm blended up one of his hideous concoctions. It would have been better if the lid hadn't come off the blender and coated a whole lot of the items on the counter with thick green slime. It all cleaned up and no permanent harm was done but lid tightness will be double checked in the future.

Wrong Turn and KT had an idea that we should go to a BBQ place then knew in Cuba. They showed up at 10:00 sharp, indicating they were serious. Lanny's new 590 Garmin GPS had a mode for finding winding roads, so he led. As you can see from the map below, we wandered all over. It was an awesome option on the open road but all it did in town was to take us down all the back streets, usually where the stop signs were located. 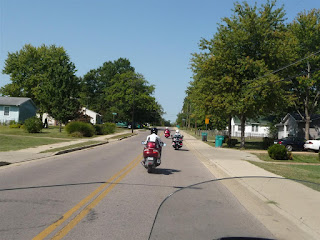 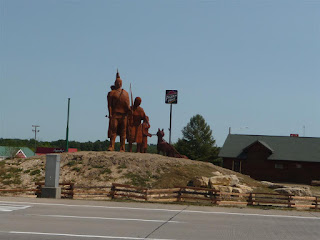 Remembering the first inhabitants at one of the I-44 exits 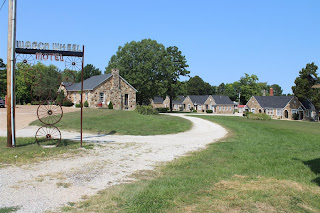 Lunch at the Missouri Hick BBQ was very nice. The place sits on Historic Route 66 in Cuba and plays up its hillbilly ambiance. Sandy and I split a sampler plate. She had the pulled pork while I enjoyed the sausage. We split the ribs and sides. 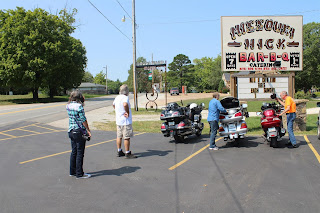 Lanny wouldn't park with us 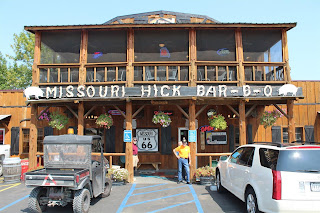 We are set for some serious eating 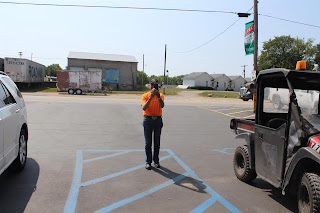 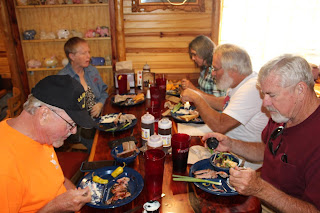 Little conversation as we chowed down 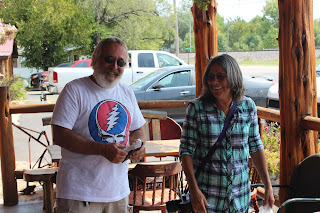 I missed the kiss

I was drafted to lead the way back to St Clair. We paralleled I-44 on Old Route 66, stopping for gas along the way. Wrong Turn and KT opted to leave us so they could explore the Jesse James Wax Museum. As we left Sullivan on Missouri 185, Lanny misunderstood something Sherm told him on the Bluetooth communicator and turned on County K while we continued to County A. We stopped in Richwoods this time to take a few pictures, but we didn't stay long because we were attracting the attention of the locals. 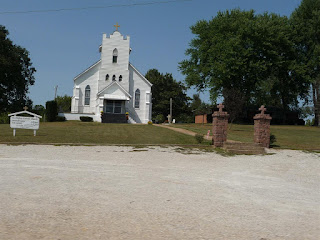 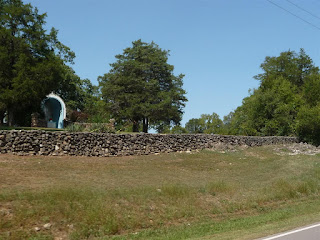 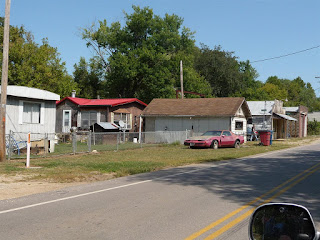 This is Richwoods Missouri 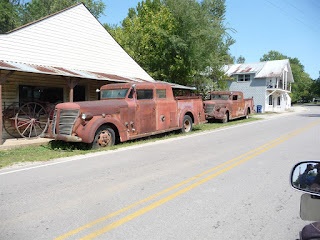 I hope they have newer equipment somewhere 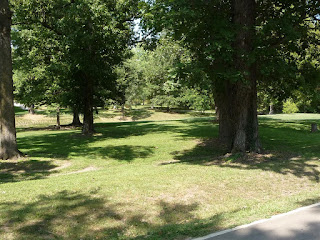 The scenery is pastoral 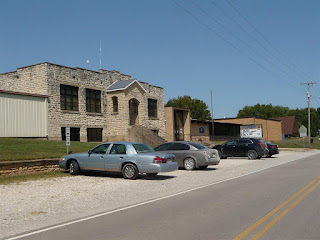 On the way back into St Clair, we saw what must have been every police vehicle in town with red lights going at the school. From the civilian car crosswise in the lot, I would have guessed the end of a pursuit be we never did find out anything from the local news.

We spent some time hanging out and visiting until 5:00 PM when it was time to leave for supper in the small town of Defiance. 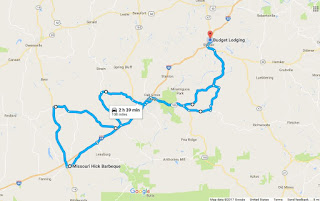 It was 30 miles to Defiance and, since it was going to be after sundown when we headed back, Sherm, Sandy and I took the Equinox. We followed Missouri 47 north through Washington and across the Missouri River. There, the GPS led us briefly astray. It told us to take something called the Augusta Bottom Road. A few hundred yards in, I realized we had probably found the worst gravel road that I had seen in many years. Calling it washboard was being kind. It was also narrow so it took about a ten point turn to reverse direction. We went on up to Missouri 94 and turned right.

Missouri 94 was a joy. It would have been nice to have the bikes. We wound our way through vineyards and past nice homes. It was obvious that this area was reasonably well off.  We found the Defiance Roadhouse at what appeared to be the only crossroads in the small town. It looked nothing like the place in the SciFi TV series.

I had a Cobb salad that was pretty good. Sandy had a Hawaiian pizza that left a lot to be desired, especially with its thin, soggy crust. The people were nice, though, and she got into a long conversation with a very pretty local lady. We left as the band was getting set to play. 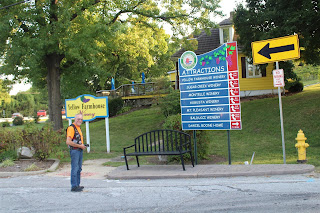 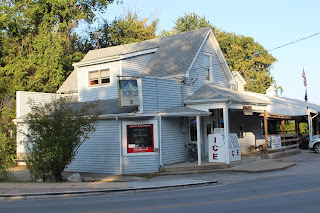 The corner across from the Roadhouse 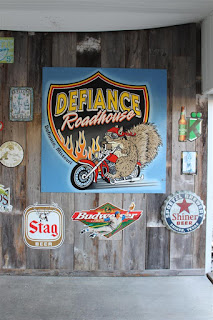 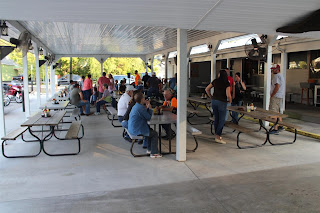 A popular place on a Friday night 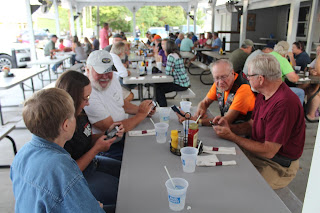 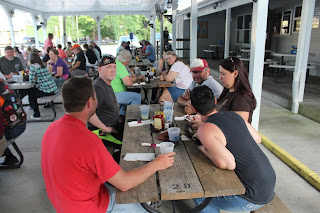 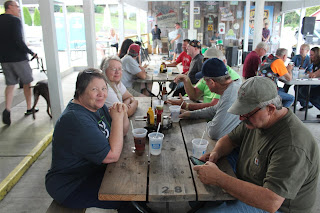 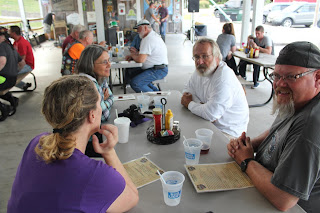 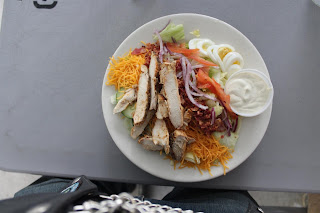 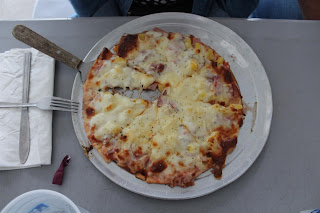 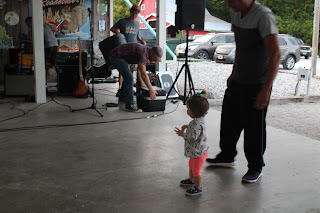 This little girl kept us amused 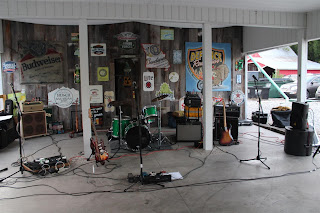 The band was set up so we headed out

Dusk and Bambi were a major concern, so I drove a lot more slowly on the way back to St Clair. Wolf passed is on his Rogue as we were going through Washington. We had noticed a large number of cars on the road as we were going out and there were still quite a few as we came back. This area seemed to be a lot busier than we would have thought, considering its distance from the big road.

We got back to the room at 8:15 and prepacked much of our gear in anticipation of our morning departure. Then we said a few goodbyes and were in bed before some of the folks got back from Defiance. 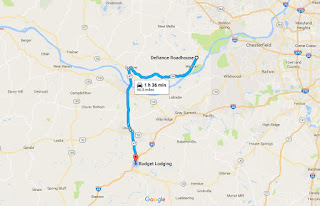