Heather planned a surprise party to celebrate Tom's 40th birthday this weekend. Tom's brother Wojtek and his wife Agnes would be hosting at their house in Breslau (part of the Regional Municipality of Waterloo). Sandy and I couldn't miss this, so I skipped a night of driving for Safe Ride Home Sudbury. Once the teams were assigned and the orientation done last night, I came home and got some rest. Tonight, others will cover for me too.

It was 33F when we rolled out this morning, but the Weather Network said it felt like zero. We were on the road at 7:20 AM after a brief stop at McDonald's (where the damn kiosk printer didn't work one more time). A light rain was falling so, with the below freezing temperatures, speed was moderate and no sudden moves were contemplated.

I started out fine but got bitten by the drowsy bug somewhere down the line, so we stopped for coffee at Tim's at Seguin and then again at the Innisfil On Route. Traffic jammed up for a bit on the 400 around King due to a closed lane, but that didn't last long. Because it was around noon Saturday, we took the cheap route and followed 400 all the way to 401 West without incident. 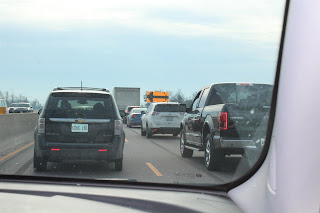 Heather had a special birthday cake made by Too Nice To Slice, which she asked us to pick up at their shop in Kitchener. The place was a little tricky to find because it was in the back of an industrial yard, but we finally spotted it. They had some amazing cakes in there. This one featured a can of Polish beer pouring over the cake. We gently put it in the back of the Equinox and, with great care,  delivered it directly to Breslau. 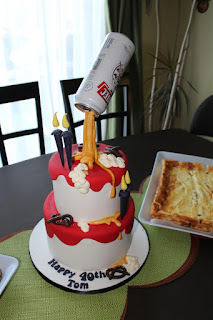 The cake arrived safely in Breslau

Since it was still early and we hadn't eaten, we drove back into Kitchener and stopped at Oscar's Family Friendly Restaurant on Victoria Street. The food wasn't anything to blog about, so I won't. Then we headed over to Zehr's for a fruit tray to contribute to the party. It was still early so then we took a tour to Guelph to take on some fuel.

Back in Breslau, we saw that there wasn't much street parking on Avery Court. The number of cars would have tipped Tom off except that Heather told him Wojtek had called to say parking would be tricky because "someone on the street" was having a gathering.

The crowd started to assemble. Food was put out. Children played. Adults talked and had a drink or two. The Polish side of the family brought some good vodka, as usual. We waited for Tom, Heather and the kid to arrive. 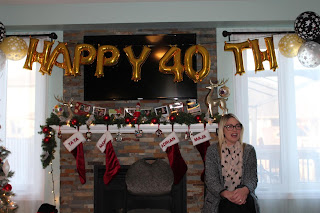 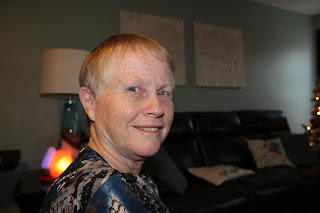 Are they here yet??? 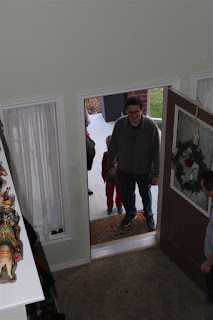 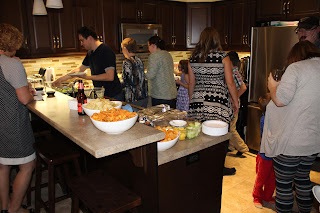 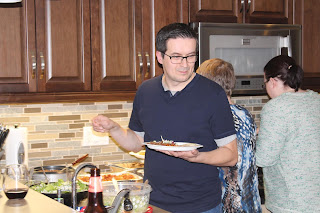 The birthday boy gets a plate 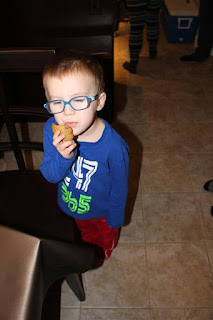 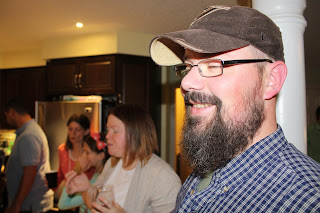 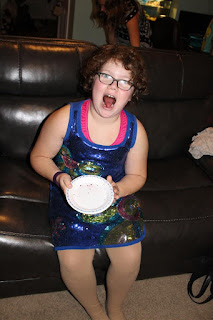 Granddaughter Jolene has finished it all (whatever it was) 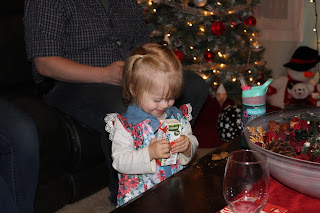 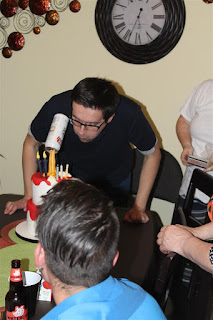 It's tough to blow out candles around a beer can 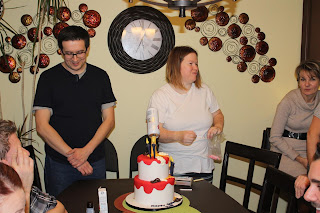 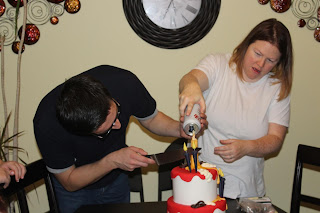 Now how do I cut this thing???

After the food and gifts and visiting were done, Sandy and I headed out for Woodstock about 7:00 PM. We usually stay at the Best Western Plus but I had left it a little late to book the reservation. Something must have been going on because there was no room at the inn. Luckily I was able to get a king room with couch at the Days Inn next to the Tim Horton's on Norwich. The room was OK and I was able to add a few Wyndham Rewards points to the bank.

It was a quiet evening. We turned in early and watched a little TV on the large flat screen before turning out the lights and going to sleep. 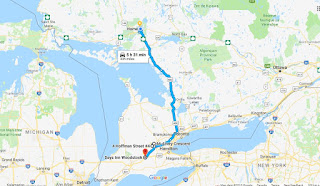