It was a slow morning. We left the hotel room at 8:40 AM. After a quick stop at what is one of the better run McDonald's franchises on Norwich Avenue (fast, accurate pleasant, all the equipment works), we were eastbound on Highway 401 in a moderate to heavy fog bank. The temperature was 35 F so ice was not an issue and there was no snow on the ground.

We got off at Highway 8 in Kitchener and took Sportsworld Drive and Maple Grove Road across to Highway 24. This took us to Guelph, where we bypassed much of the city by taking Highway 7 and County 29. In Eramosa, we reconnected with 24. 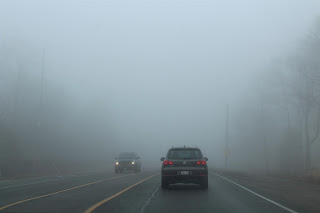 A short jog north on Airport Road at the end of 24 brought us to Highway 9 in Mono Mills. Mono has two gas stations which typically boast the lowest gas prices along our route. Today, 87 octane was going for $1.149 compared to $1.209 in Woodstock and $1.259 in Sudbury.

The Highway 24 & 9 route takes longer than following the super slab to Toronto, but I enjoy it more when we have the time to spare.

As we drove along, I contemplated my GPS. Who would have thought, twenty years ago, that we would have a device that showed all the roads, our position on them, and points of interest along the way. Jester had one when we went to SEVROC in 1999, but it was just a green screen with digits on it.

When we left Highway 9 for 400 North (the new ramp is an opposite turn from the old one), the fog lifted. We made a stop at the Barrie ONroute service area just after 11:30. I got a Tim's Chipotle Breakfast Steak Wrap (without the chipotle) to go. And more coffee.

There was still no snow on the ground but the Mount St. Louis ski area must have had the snow making machines going overtime. Their hills were patches of white in a sea of brown. 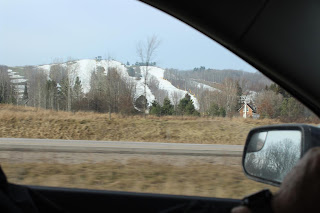 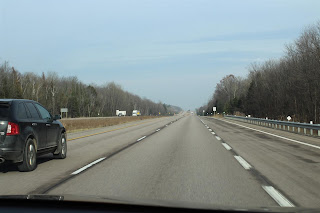 Traffic was light on Highway 400 north 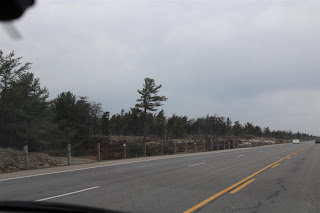 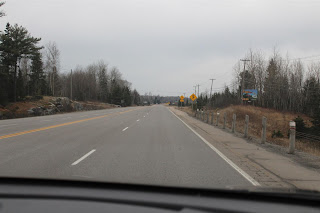 We have Highway 69 all to ourselves

The four-laning of the 100 miles of highway between Parry Sound and Sudbury, under construction since 2004 and originally scheduled to be finished by 2017, was far from done. One of the features on the new highway was wildlife fencing, largely installed into solid rock at what I presumed was a significant cost. 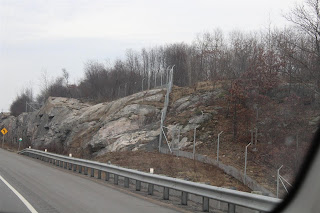 Note that the bottom two feet or so of the fencing consisted of a much finer mesh. Then, when the big fence stopped, a much smaller fence carries on. I used to think this was a turtle fence, since I couldn't see it blocking much else and they are very concerned about Blanding's turtles in Northern Ontario. Then I was watching a documentary on Killbear Provincial Park near Parry Sound and saw the same type of fence. It was to keep rattlesnakes off the road. They go to great lengths to protect the Massasauga rattlesnake in Ontario. The fact that it is illegal to kill them should amuse some of our southern friends.

In fact, driving this highway many hundreds of times over the years, I have never seen a dead rattlesnake. I have hardly ever seen a dead turtle. I wonder how much they spent on this dwarf fence of limited purpose while we are still looking for a PET scanner at the hospital in Sudbury? 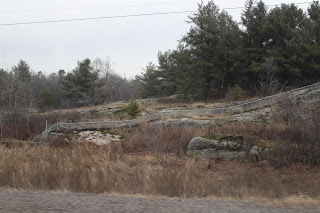 Once we got north of the snake zone, the big wildlife fence resumed without the finer mesh. This fencing even has pass through gates for people on foot such as hunters. 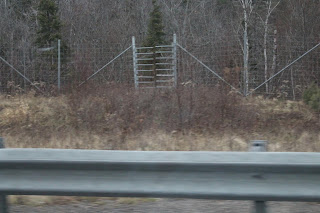 Gate in the big fence 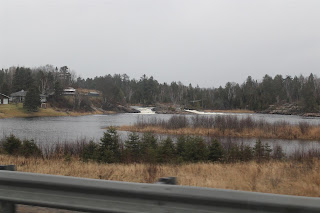 As we approached Sudbury, the speed limit dropped from 100 KPH to 90. I was still doing 115 when I went by the unmarked OPP Tahoe, but he didn't seem to care, so we made it home unscathed at about 3:25 PM.

Now we will probably be staying close to home until spring. 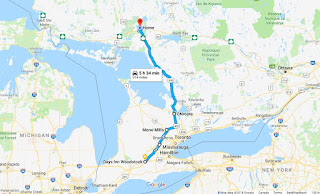