Sudbury Ontario to Waterloo Ontario and Back - Moving Trip #3

When we got back from our trip to Waterloo where we picked up the condo keys, we has less than two weeks to get the move done. You can't just pull up to a high rise building any time you want and start unloading a large amount of stuff, so we had booked the freight elevator for three hours Thursday (today) starting at noon. This gave us a target for our penultimate load.

The bulk of our things were going into either bankers boxes or slight larger boxes that had originated at the hospital and came to us via Lana, a schoolmate of Kim and Heather, who had just moved into her first house in Garson. We also arranged to give her some of the furniture we were not taking with us.

Wednesday, I started loading boxes. The symmetry of only having two sizes of box allowed for very orderly arrangement of them in the 5 x 10 trailer. When I had three layers of loaded, we started placing odd shaped and bulky things on top. We also loaded the Equinox and the Kia Rondo, the latter of which would be making a one way trip.

Once again, Leo became an essential member of the moving team. I'm sorry we did not get any photos today because I would have liked to have some visual memories of how this went.

We picked Leo up and brought him over to the house before 6:00 AM this morning. It was warmer as we set out, Sandy and I in the Equinox with Leo following in the Kia Rondo. For our American friends, the Rondo was discontinued in the USA after 2010. This was a 2012 Canadian model Sandy's dad bought new and bequeathed to her in his will. It didn't get used much and had less than 15,000 kms on the odometer.

It was unseasonably warm (49 F at 7:00 AM) and we saw a northbound Indian motorcycle north of Waubaushene, where we stopped at the new Tim's. Continuing on, we approached Waterloo via Highway 9, Orangeville and Fergus. I found the most efficient way to get to the condo from this side was via Winterbourne and Bridge Street, something I had not considered before.

We arrived at the service doors of 6 Willow Street a couple of minutes before the appointed noon hour. I went in to the management office to look for Alice, the building superintendent, not knowing that she had been watching for me. She tracked me down and watched as we got the vehicles backed up to the service door. Then she showed us how the freight elevator worked and left us to our own devices.

Sandy did not want us wearing shoes inside the unit due to the off-white carpeting. The foyer was tile so that was OK. The system we set up was that Leo would bring the boxes from the trailer and vehicles and stack them by the elevator door. I would load the elevator and ride it up to the 15th floor and carry them into the unit, stacking them in the foyer. Then Sandy would move them into the living room and re-stack them there. The job got finished quickly and we were able to turn the elevator back over to Alice sooner than we expected. Then I booked it again for 6:00 PM to 9:00 on the 9th (so Mike and Tome could help with the furniture move in).

The last task was to take the Kia and park it in one of our spaces in the underground lot.

We were on the road back before 3:00 PM. There were a lot of motorcycles enjoying the unusually warm weather on our way back. Arriving in Sudbury about 8:30 PM, I unhooked the trailer and gave Leo a ride home. 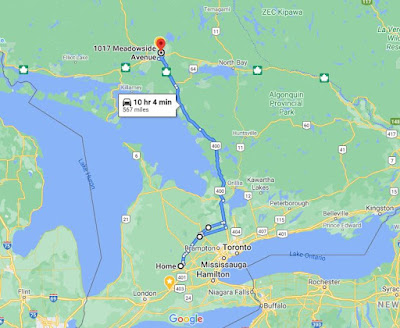