Back from Waterloo on Thursday, it was time to get the last things out of the house. I put out a call to the Freedom Riders and had some of our brothers and sisters of the wind come out Sunday and lend a hand. Not only did we get the furniture we were taking to Waterloo loaded in the trailer, we also got the large couch, love seat and other things we were giving to Lana moved to the garage. It would be easier for her to pick them up from there before the 15th. The weather was absolutely spectacular for the move.

Our TV was on the floor and we ended up sitting in camp chairs for the night. That was after we went out for supper with Leo and Diane at St. Louis Bar & Grill.

This morning, we loaded the TV and chairs in the Equinox. The only things remaining were our paintings and prints, which we would pick up next week when we came up to close the deal on the house.

It was spitting a bit as we left town at 8:30 AM. We stopped at the truck pullout at Burwash to dump the garbage and, with the air a balmy 57 F, the morning did not feel like Northern Ontario in November.

It was 70 F when we saw a northbound group of sport bikes at Waubaushene. I would bet they were heading into Muskoka for a bonus last day of riding the curves.

Arriving at the condo by mid-afternoon, we geared up for a wait. That was not to be because the afternoon booking did not show up and Alice let us go ahead early. With Mike and Tom not there yet, I started moving everything that I could alone. That turned out to be a lot of things. Mike arrived early and we got the rest of it while Tom, who had to travel from Tillsonburg after work, arriving in time for the clean-up. He also brought some of the boxes I had stored in his garage on the way down.

The son-in-laws went over with me to park the trailer in its new home. Then we came back and I hooked up the new modem/router. It was as easy as Rogers had suggested and we had the WiFi and cable working in no time. The older big TV in the bedroom was OK but we discovered that the cracking noise when I squeezed the screen while picking up the 49" Samsung smart TV was fatal. We knew something would not survive the trip.

At the end of the day, we were finally in residence. We had my roll top desk (circa 1977), our kitchen table and chairs (circa 1975), camp cots and folding camp chairs plus a ginormous number of boxes. Time to start unpacking. Tomorrow. 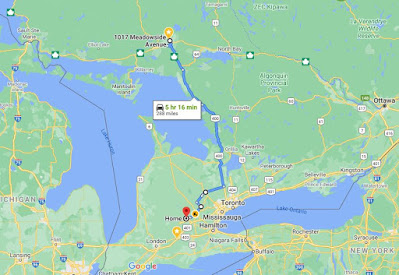