Coos Bay Oregon to Vancouver BC

The trailer had been packed and connected last night so all that remained was to have coffee and head out. Our few days here were great and Pat and Sherm have shown us true Oregon hospitality. They are an example of what makes VROC great.

We headed out about 7:00 AM looking for Highway 101. Just before the turn off Virginia Street, I stopped and waited for a light to change. It took a few minutes to realize that there was NO traffic light at this particular intersection. Luckily no one had come up behind me to wonder what was wrong with this particular Canuck.

Once I figured out the lights, I turned left on Highway 101 and headed north for Florence. This is a very nice road that wanders and curves along the coast. Traffic was light so we relaxed and watched the scenery go by. When we reached Florence, my wildlife radar switched off as we went through town. Bad move since, just past the McDonalds, Sandy grabbed my shoulders and shouted “deer, deer, deer”. Sure enough, a doe and fawn were wandering out on the street ahead of me. We stopped and let them figure out which way they wanted to go.

As we left Florence headed north on 101, it became clear to me that I had missed a turn since we should have left heading east on 126. I stopped and double checked with a local and then went back and found the intersection I had missed. Now headed east, we followed a river and then wound our way up and over the Coastal Range as trees were so thick they hung over the road. There was even a short tunnel at one point. We reached Eugene and found BMW of Western Oregon on 126.

Sandy’s only real complaint on the bike was that she gets cold much faster than I do. At the BMW shop we rectified this as Madeline found a Gerbing heated jacket liner, gloves and silk glove liners that fit her. The liner plugs into a plug from the bike battery and the gloves plug unto the liner. A rheostat that lets the wearer control the amount of heat governs the whole thing. A friendly young man from the service department hooked the cables to the battery since all my tools were buried deep in the trunk. Sandy put on the liner and plugged in. The gear cost a few bucks, but the first priority of any tourer is to keep the passenger happy. I was also pleased to see that Visa Security wanted a call to verify that I was me after the fraud problem back in April.

It was still cool as we jumped on I-5 northbound and my faithful partner was happy with the warmth. The ride to Portland was uneventful except where traffic backed up at one spot. What triggered this was a minor accident on the OTHER side of the Interstate where a pickup and trailer jackknifed. What is it with people that make them slow down and rubberneck causing unnecessary traffic jams?

We passed into Washington and, once we went through Olympia, the idea of traveling during rush our on the Friday of the July 4th weekend didn’t seem like such a good one. It seems the coast from Olympia through Tacoma, Seattle and Everett is like one long city. Traffic south bound was frequently stopped and we were held up several times for accidents and a few more times for reasons that never did become apparent. North of Everett, traffic thinned and we were able to get moving again.

After listening to Vancouver radio, we opted to follow I-5 right to the border. I was surprised on this double holiday weekend that we only had a three-car wait to get to the booth. The female officer took out driver’s licences and then, for the first time I can recall, asked for our birth certificates. She asked a few questions about who we were and then asked about what we bought. I disclosed (always disclose) and then she asked Sandy’s maiden name. She got 90% on that one so the young lady decided we were of sufficient character and standing to be allowed back into the True North Strong and Free.

I had mapped out my route to West Vancouver using a very high level map. As a result, I missed the intended exit. I took another one headed north figuring it would reach Highway 1, AKA The Trans-Canada Highway. It eventually did after a tour of every red traffic light in downtown Surrey. We rocked in on 1 over the Second Narrows Bridge, through North Vancouver and then down 15th street to downtown West Van, a descent that reminds me of San Francisco. Mal has a nice apartment overlooking Ambleside, Stanley Park and the Lion’s Gate Bridge. 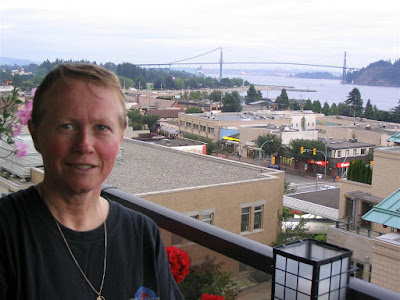 He was waiting and we got the trailer unhooked, parked and covered and the bike parked beside it. 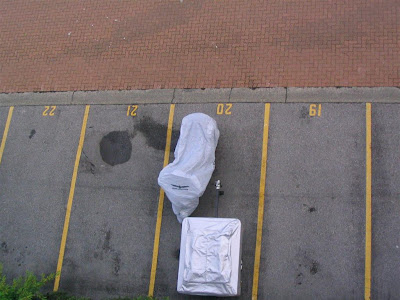 Mal had pizza and Greek salad (and some wine) ready and we spent the evening catching up with him and Jan.

Oh, the pillbox I thought I had left in Ely or Eureka with my blood pressure meds turned up, of all places, in the bag I carry the computer, camera and phone cables in.
Posted by Jim "Skid" Robinson on 7/01/2005