Vancouver to Oliver BC

The rain stopped overnight so we packed, hooked up and were on our way slightly after 8:00 AM. Highway 1 was busy as we left the Vancouver area due to rush hour, but we jumped in the HOV lane (buses, cars with more than one person and motorcycles) and did quite well. It surprised me ho many vehicles had only one person in them.

A word about Vancouver gas prices. The Chevron station next to Mal’s has two prices. During the early evening, gas costs $0.899 per liter. Any other time is $1.019. Mal tells me that there is a 3.5 cent discount, but the cycle is daily. We didn’t fill up in Vancouver. By the time we got to Abbottsford, about 50 miles east, the price was a more manageable $0.799. But, to make up for it, it started to rain. We put on our gear and continued.

At Hope, where the original Rambo First Blood movie was filmed all those years ago, we branched off on Highway 3, the route to the Crow’s Nest Pass. At the pullout near the beginning, we saw another GL-1800 towing a Bunkhouse camper trailer. We stopped to see if they needed any help, but they were just putting on their Gerbing gear. We followed them up through the rain and cloud and fog at a conservative pace, winding our way up until we came to the visitor center in Manning Provincial Park. We stopped to chat. Rick had a ’02 Wing with 136,000 Kms on it and a dog in a carrier on top of the cooler on the tongue. The dog was somewhat put out since, when Rick rides alone, Woody travels on the back seat.

We continued on and stopped at Rick’s place near Keremeos for coffee. 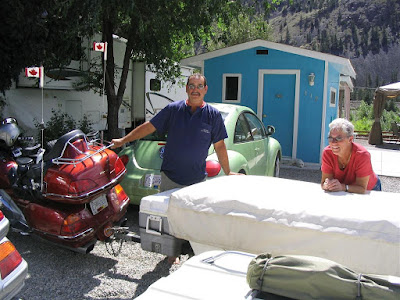 Then it was on to Osoyoos to visit the Lees-Ure Lite Trailer people. I pulled in and found Nick in the shop assembling a trailer. I told him I needed a roof rack and he asked if I was “That Guy Who….”. I was. He checked out the trailer and got a new roof rack. While he was installing it, owner Rick Lee rolled up in his Hummer. WE talked a bit and then young Amanda, one of the people I had been dealing with on the phone, showed up. Soon, the rack was installed and we were on our way.

We headed north up 97 to Oliver (which bills itself as the Wine Capital of Canada), where we got a site at a very nice KOA just north of town. 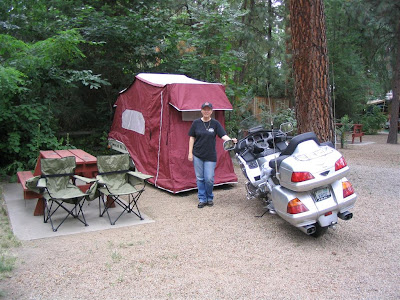 After we set up, we went across the road to a pub for supper. Then we came back and I got on-line to check the mail. The setting sun caught the cliff behind us, making it really stand out. 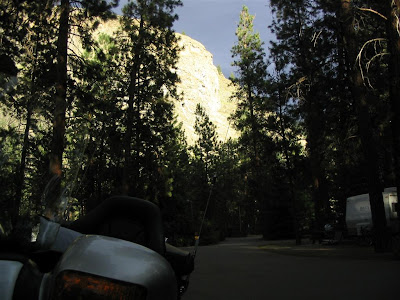 Now comes the question of the day. Which way do we go tomorrow. The Okanagan lies to the north taking us back up through Rogers and Kicking Horse Passes, The Crows Nest Pass and Lethbridge lie to the East and Kalispell Montana and US Highway 2 are south of us. All roads lead to home. I don’t know which way we are going but we will kick the priorities around tonight to see if we can reach a decision by morning.
Posted by Jim "Skid" Robinson on 7/06/2005