It is time once again for the Toronto Bike Show and VROC Frozen North Dinner weekend. We'll head to Woodstock today, take in the show and dinner in Toronto tomorrow, spend tomorrow night back in Woodstock and come home on Sunday.

Over the last day, perhaps two inches of light snow drifted down in our area. For some reason, the city felt it necessary to mobilize the plows so I took some time to clean our neighbor Gwen's driveway. I just used the scraper because it wasn't worth getting the snow blower out. Sandy told me it was -16C, still above the seasonal average but below what we have experienced so far this winter, and clear. I think this is only the second clear day in a couple of weeks.

The last few trips south, I have driven all the way to Toronto and taken the 401 instead of using back roads. Fuel mileage for the Caravan, usually about 23 MPG (US) on the highway, was down to 20 MPG or less and I was getting concerned. Mileage drops as the temperature goes down but this was way too much. Usually, to Toronto, I drive 18 KPH over the limit and then flow with the faster traffic on the 401 (which usually means 130+ KPH). Today, I will slow it down and see what happens. My plan is 100 KPH in the 90 zones and 105 in the 100 zones.

We hit the road at 9:20. The pavement was clear but wet. The 100 KPH must have been a good speed because we didn't catch up to anyone of get caught up to for the first 40 miles. Near the Key River, we had some very light snow crystals falling from the blue sky and sparkling in the sun. Just another one of Mom Nature's beautiful sights.

South of Parry Sound, the weather changed. The sky clouded over and we rolled into typical Georgian Bay snow squalls. They weren't bad overall, but there were a few patches where they got quite intense, and the road became snow covered while visibility dropped to almost zero. Still, there wasn't too much accumulation and, slowing down a bit, we were able to continue without much difficulty. 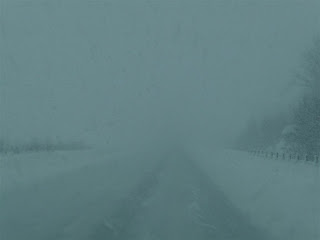 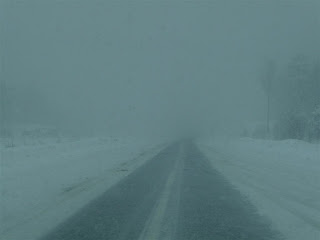 Snow squalls along Highway 400
By Waubaushene, we cleared the band of squalls and the sky cleared again. The wet roads were taking a toll, though, and the windshield washer fluid light came on after less than 150 miles. The tank had been full when we left Sudbury. I stopped at the Esso Station at Waubaushene and bought three jugs, putting one in the tank and holding the others in reserve. We would probably need them before we got home. I remember my older vehicles where the washer fluid tanks didn't hold a full jug. The larger tanks on the newer vehicles, which hold a whole container, are much more convenient.

Travelling at my new 105 KPH pace on the slab kept me in the right lane most of the time. Trucks in Ontario are supposed to be governed at 105 KPH (thanks, Premier Dad, for saving us from ourselves yet again) so we didn't cause them any problem. I fired up my Atlas Shrugged audio book on the Zumo and listened to Ayn Rand's classic tale for an hour or so as we cruised along. In Toronto, we exited onto the westbound 401 and found traffic our direction moving well, although the eastbound lanes were dead stopped. It was only 1:30 so I can only guess there was some kind of accident ahead of them.

In Cambridge, we stopped for fuel and I found my slower speeds seemed to be working. I got 24.7 MPG (US) for the run. This was not a record (that was achieved on a day of running back roads at 80 KPH), but was much better than average. Interestingly, my elapsed time wasn't too far off the faster runs. With gas in Sudbury costing $1.15/liter ($4.36/USG assuming the dollar at par), I will be trying to keep the speed down in the future.

We arrived at Kim's shortly after 2:30. Mike was at work and Jolene was at daycare so we visited with her and Baby Robyn, who is getting much more animated as she gets older. 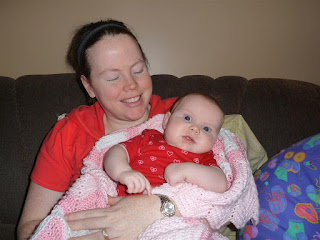 Momma Kim and Baby Robyn
I left Kim's at 4:45 to pick Heather up at her office in Ayr and take her to Cambridge to get her hair done. I stopped on the way at a Tim's for a snack wrap and wondered why someone who was buying coffee for a whole crew (nine coffees and a bottle of juice) would tie up the drive through instead of going inside. I picked up Heather and we got to Cambridge early, so we stopped at Starbucks. Heather had to order for me since I don't speak barista. We sipped coffee and discussed how here job was going before going to the hair place.

It took an hour and a half for Heather to get done so I sat in the van and listened to Atlas Shrugged while waiting. One quote jumped out at me. One of the arrogant academics who was screwing up the economy said "We must control men to force them to be free". I am enjoying the book (again) and seeing that, while the world it describes is out of date and fictional, many of the situations she describes hold true today.  Especially the feeling among the liberal elites that the average person is not capable of taking care of themselves.

When Heather was done, we returned to Kim's to get Sandy. Mike and Jolene had gotten home but we missed Jolene because she was already in bed. Sandy says she is now getting into the Terrible Twos and got some photos of her before she went to bed. 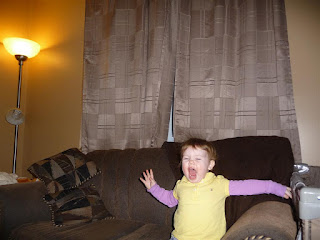 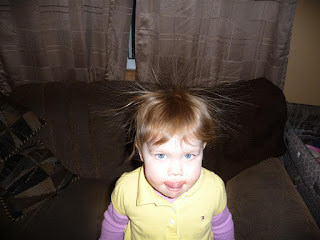 Who says static electricity can't be fun?
Leaving Kim's we drove on to Woodstock, stopping at McDonald's to pick up supper. Once again, I am really impressed by the layout of the new house. Tom was home and we watched some TV before going to bed.
Posted by Jim "Skid" Robinson on 1/07/2011