The Freedom Riders Motorcycle Association of Northern Ontario, Inc. held it's annual Kris Kringle party this evening in the field house at Ridgemount Playground. It might seem like an odd time for a Christmas party but we don't have date conflicts with other parties and the presents for the gift exchange are usually on sale.

Last year, the weather got down to -32C overnight. This year was much milder.  We picked up Sue, the club Secretary, on the way and arrived before 3:00 PM. There was a good contingent of early people to help with the setup.

The official evening started with a short club meeting at 5:00 PM. That was followed by mingling and socializing for a bit before the pot luck buffet was laid out. The food was excellent and nobody was hungry when it was over. 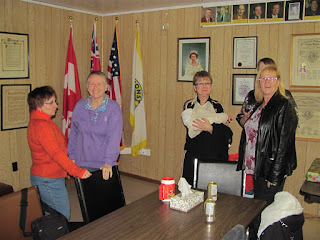 Some of my favourite ladies 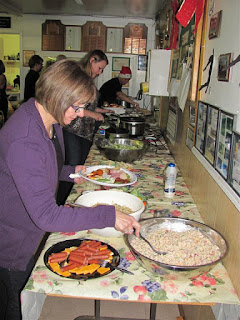 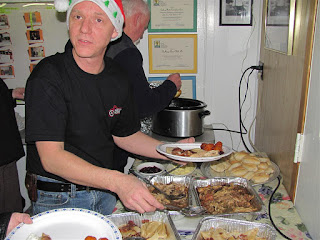 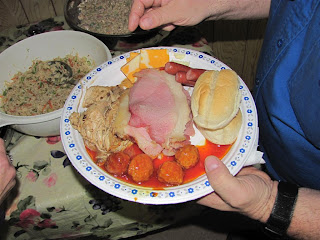 Mmmm Mmmm Good
After dinner, we moved on to the gift exchange segment of the Kris Kringle. It involves wrapped gifts on a table and names in a drum. The first person called picks a gift from the table, unwraps it and shows it to everyone. Each person after has the option of taking a gift from the table or stealing one that is already open. If your gift is stolen, you may take one from the table or steal another one (provided it hasn't already been stolen in this round). It is best to be picked last.

I pull the names and keep track of who has stolen what. This can get complicated near the end when many open prizes are in play. Sandy usually complains that she either picks something she doesn't need or gets her choice stolen. I have tried to convince her this isn't about the gifts. Rather, it is a warped sporting event where you try to screw your fellow club members.

Ken told me a tale of one such exchange where he was picked last. Rather than steal something, he wanted to get it over with so he took the last wrapped gift from the table. It was a set of tie-downs, which he didn't need. So this year he was picked part way through with many nice gifts available to be appropriated. Instead, he took a wrapped gift and got (you guessed it) tie-downs. Santayana said it best.

My name was pulled part way through and I got a set of titanium drill bits. Sandy outdid herself and was picked second last. Almost perfect for a change. She stole a nice pair of pillows. And still, in retrospect, thinks she might have preferred a different choice. I give up:-)

We hung out after the gift phase for a while and then people started to drift away. A number have booked rooms at the motel around the corner. The wild parties are a thing of the past because of the club's position on drinking and driving. We are much more responsible these days and a lot duller as well.

It was a good party. Thanks to Marissa for coordinating it.
Posted by Jim "Skid" Robinson on 1/21/2012